To investigate the potential of wild boars to host Anaplasma phagocytophilum, we analyzed bacterial 16S rRNA and ank genes. DNA sequencing identified several A. phagocytophilum variants, including a predominance of strains known to cause human disease. Boars are thus hosts for A. phagocytophilum, notably, strains associated with human granulocytic anaplasmosis.

The enzootic cycle(s) of Anaplasma phagocytophilum, a tick-transmitted bacterium that causes granulocytic anaplasmosis (GA) in humans (HGA) and certain domesticated animals is driven by the distribution of its vector ticks and wild mammal reservoirs (1). Molecular and phylogenetic analyses of A. phagocytophilum sequences from ticks and hosts provide evidence that this bacterium comprises a complex of closely related strains that differ in their host preferences and pathogenicity (2–4). Although 16S rRNA, groESL, and ank gene variants from horses with GA in Europe, and less frequently from infected dogs, are identical to sequences from most HGA patients (4–7), the wild reservoir hosts for strains causing human anaplasmosis (AP-ha) in Europe are poorly understood.

In contrast to the eastern United States, where white-footed mice are a primary reservoir for strains that infect humans, rodents in Europe have not been found to display high zoonotic potential (8). Moreover, cervids have been found to propagate mostly A. phagocytophilum variants that have not been detected in humans (9,10). An exception to this finding is that red deer seem to maintain strains that induce HGA (4). In Slovenia, identical A. phagocytophilum groESL sequences have been identified in patients and wild boars (Sus scrofa), which suggests that boars may represent a potential reservoir for AP-ha variants (10,11). Although several clinical cases of HGA have been reported in Poland (12), no data are available concerning A. phagocytophilum infections in boars, even though they are the most abundant big game animals (≈200,000 animals are hunted and killed annually) and host all 3 parasitic stages of the tick vector Ixodes ricinus. Thus, we sought to determine the frequency of A. phagocytophilum in populations of wild boars and in host-derived ticks to clarify the role of boars in the ecology and epidemiology of GA.

Sampling was performed at 2 tagging stations, Zielonka and Kąty, in distinct forested areas situated within the Zielonka Primeval Forest, in west-central Poland. EDTA-blood specimens were collected from 325 animals harvested during May–December 2006, 2007, and 2008. The animals represented 3 age groups: piglets (34%), yearlings (49%; >1 to 2 years), and adults (17%). Paired samples of liver and blood were collected from 24 boars. During May–November 2006, 50 animals were inspected for ticks at Zielonka. DNA was extracted from blood and ticks by using Genomic Mini AX Blood and Sherlock AX kits (A&A Biotechnology, Gdynia, Poland). Nested PCR targeting a 546-bp fragment of the A. phagocytophilum 16S rRNA gene was performed (13). Selected positive samples were subjected to a second PCR targeting a 444-bp region of the ankA gene (14).

Of the 325 animals tested, 39 (12%) yielded A. phagocytophilum 16S rRNA amplification products (Table). Bacteremic hosts were detected in all 3 years with the highest prevalence (20.3%) recorded in 2006 and the lowest (8.8%; χ2 test, p = 0.015) in 2008. Bacterial DNA was identified in all 3 host-age groups, i.e., in 13.6% of piglets, 12.6% of yearlings, and in 7.1% of adults. The overall infection prevalence among animals from Zielonka (17.4%) was significantly higher than among those from Kąty (7.1%; p = 0.004). The finding that 26% of the 50 animals harvested at Zielonka in 2006 were infected represents the highest A. phagocytophilum infection prevalence ever recorded among boars. Of 24 liver samples, 2 (8.3%) tested positive. Both animals with positive liver samples also yielded the bacterium in blood. The remaining 22 blood samples were PCR negative.

Seventy partially engorged I. ricinus ticks (58 nymphs, 11 females, 1 larva) were collected from 9 animals (7.8 ticks per infested animal). Because all of these ticks parasitized boars with negative blood specimens, the pathogen identified in 3 (5.2%) nymphs and 4 (36.4%) female ticks could have been acquired during their previous blood meal. On the other hand, detecting the same 16S rRNA variant in a female tick (294–9) and in a nymph (294–6; Figure 1) that fed side by side on a yearling, may indicate that the bacterium was acquired by co-feeding transmission (between infected and noninfected ticks).

Sequencing of 16S rRNA products from 27 selected animals (20 from Zielonka, 7 from Kąty) produced 29 sequences (27 from blood, 2 from liver). These sequences showed marked diversity, representing 7 different A. phagocytophilum variants that were 99.6% similar to each other. The most common variant comprised 13 (44.8%) sequences (e.g., 470–5, Figure 1) that matched sequences reported from HGA patients in North America and Europe, including a sequence from a patient in Poland (Figure 1). These sequences, which were related to sequences found in HGA case-patients, prevailed among infected animals (12 of 20) from Zielonka, which harbored them in all 3 years. The second most frequently amplified variant comprised 10 (34.5%) sequences identical to a sequence from red deer in Slovenia. Two hosts from Kąty yielded an AP-variant 1 strain for which white-tailed deer are reservoirs in the United States (15). Three distinct sequences matched sequences from a dog, a tick, and a mouflon in Germany, whereas 1 sequence (468–3) was unique. Two boars with positive liver samples (457; 717, Figure 1) had dual infections caused by distinct variants identified in blood and liver samples, respectively. 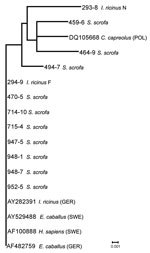 Among the 4 sequences from ticks, 2 clustered with the AP-ha variant. Twelve partial ankA sequences detected in 10 boars and 2 ticks showed 98.9% homology to each other. Seven (70%) animals yielded sequences (e.g., 470–5; Figure 2) identical to a sequence from an HGA patient in Sweden. Their corresponding 16S rRNA gene sequences clustered with the AP-ha variant. Of the remaining ankA sequences, 1 matched a sequence from a roe deer in Poland, whereas 2 were unique. These 3 sequences were identical on the basis of the 16S rRNA gene. This finding confirms that the ankA gene is a more informative marker for the characterization of genetic diversity in A. phagocytophylum (4). Among 2 ankA sequences obtained from ticks, a female tick yielded the predominant ankA variant, whereas a nymph harbored a novel variant.

The presence of bacteremic animals (range 9%–20%) throughout this study provides compelling evidence for the involvement of wild boars in the enzootic cycle of A. phagocytophilum. Further studies with larger tick samples are necessary to investigate the efficiency of boar-to-tick transmission. The fact that most of the partial 16S rRNA and ankA sequences (13 of 27 and 7 of 10, respectively) amplified from boars corresponded to A. phagocytophilum strains known to cause human disease, reconfirms earlier findings in which groESL sequences identical to those from patients in Slovenia were found in wild boar (S. scrofa) populations in the Czech Republic and Slovenia (10,11). Detection of A. phagocytophilum strains associated with human infections in all 3 boar age groups in Zielonka, as well as in host-derived ticks, strongly implicates the wild boar as a notable host of HGA variants.

Because bacteremia among hosts from Zielonka was frequent (range 12%–26%) and boars are quite abundant in Europe, they could be used as sentinel animals for detecting A. phagocytophilum infections, notably strains known to be infectious for humans. Additional molecular and serologic studies including essential reservoir-competence experiments with AP-ha strains are needed to further elucidate the role of wild boars in the epidemiology of A. phagocytophilum.

Dr Michalik is a researcher in the Department of Animal Morphology at Adam Mickiewicz University in Poznań. His research focuses on host-vector-pathogen relationships, with a particular emphasis on the ecology of tickborne diseases.

We thank Robert S. Lane for valuable comments on the manuscript.

This research was funded by the State Committee for Scientific Research (grant no. 2PO4C 111 29).