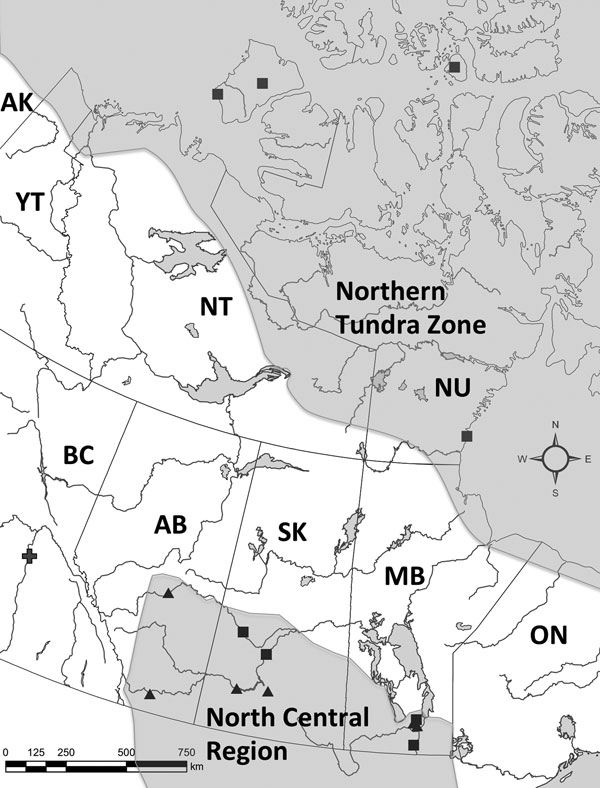 Figure. . . Location where European-type strain of Echinococcus multilocularis (plus sign) was detected in this study in British Columbia (BC) and previous reports of E. multilocularis parasites in 8 definitive (squares) and 6 intermediate (triangles) hosts in Canada. Gray shading indicates currently accepted distribution of E. multilocularis in North America. The North Central Region includes southern portions of the 3 Canadian prairie provinces (Alberta [AB], Saskatchewan [SK], and Manitoba [MB]) and 12 contiguous north-central US states (not shown). The western portion of the Northern Tundra Zone is based roughly on the established distribution of Arctic fox in Alaska (AK), the Yukon Territory (YT), Northwest Territories (NT), Nunavut (NU), northern MB, and northern Ontario (ON).

Page created: May 11, 2012
Page updated: May 11, 2012
Page reviewed: May 11, 2012
The conclusions, findings, and opinions expressed by authors contributing to this journal do not necessarily reflect the official position of the U.S. Department of Health and Human Services, the Public Health Service, the Centers for Disease Control and Prevention, or the authors' affiliated institutions. Use of trade names is for identification only and does not imply endorsement by any of the groups named above.