A community outbreak of gastroenteritis in Australia during 2007–2009 was caused by ingestion of playground sand contaminated with Salmonella enterica Paratyphi B, variant Java. The bacterium was also isolated from local wildlife. Findings support consideration of nonfood sources during salmonellosis outbreak investigations and indicate transmission through the animal–human interface.

Variants of Salmonella enterica serovar Paratyphi B that use -tartrate as a carbon source (known as S. enterica var. Java) primarily cause gastroenteritis. In contrast to experience in other countries (1–4), in Australia, S. enterica var. Java outbreaks have not been linked to food sources; the only outbreaks reported before 2007 were associated with imported ornamental fish (5). Sand in recreational sandboxes has been identified as a risk factor for infection of children with S. enterica serovar Typhimurium (6), and given the popular nature of this activity, there is a potential for sandboxes to pose a substantial public health hazard unless managed appropriately. We describe a protracted localized community outbreak associated with playground sand during 2007–2009, and highlight the need to consider nonfood sources when investigating salmonellosis outbreaks.

In mid-2007, a routine review of serotypes among cases of Salmonella spp. infection reported to the New South Wales Health Department identified a probable S. enterica var. Java outbreak in a single local government area (population 57,000), and an investigation was initiated. We defined a case-patient as a person reported to health authorities during 2007–2009 who had had diarrhea for at least 24 hours, either lived in or had visited the local government area during the 7 days before the onset of diarrhea, and had provided a fecal sample from which S. enterica var. Java was isolated. Seventy-five case-patients were identified: ages ranged from 1 month through 60 years (median age 2 years, 10 months.); 34 were female. Three children were admitted to a hospital for 1–2 days; none died.

All isolates were sensitive to ampicillin, streptomycin, tetracycline, chloramphenicol, sulfathiazole, and spectinomycin. Results of phage typing by using standard techniques (7) were available for 74 isolates; 54 were classified as phage type Dundee, 19 as a uniform “reactions do not conform,” which closely resembled Dundee, and 1 as untypeable. Seventy-two isolates underwent multilocus variable number tandem repeat analysis (MLVA) typing (8); 69 were classified as 1-(12-17)-0-0-493 and 3 as distinctly different types. This MLVA type was unique to case-patients from this outbreak; it was not seen in isolates from other parts of New South Wales.

After an extensive investigation involving case-patient interviews and food and environmental sampling during 2007 and early 2008, exposure to playground sand at public parks and childcare centers was identified as the likely immediate source of the outbreak. S. enterica var. Java was isolated from 50 of 207 sand samples taken from 39 locations; no other Salmonella serotypes were detected. All 19 playgrounds with sandboxes from within the local government area were sampled, regardless of whether they were linked to case-patients. All 35 playground isolates came from 6 playgrounds that had received sand from a central depot within the past 12 months. Salmonella spp. were isolated from surface and deep (as far as 50 cm below the surface) sand samples. Despite multiple samples being taken, no isolates were obtained from the depot. Antimicrobial drug sensitivity testing, phage typing, and MLVA typing of isolates produced results indistinguishable from those of the outbreak strain. One contaminated playground was closed to human access, left undisturbed, and sequentially sampled every 3 months. Nine months passed before all samples taken from this playground were clear of the bacterium.

Figure 1. . . Number of cases of Salmonella enterica variant Java infection and month of onset in children playing in sandboxes, Australia, 2007–2009.

To confirm the hypothesis that sand from playgrounds contaminated with S. enterica var. Java was the immediate source of the outbreak, we performed an age-matched case–control study of case-patients 1 month to 4 years of age involving 16 case-patients and 32 controls during May 2008. Controls were selected from the registers of 2 local community child-health clinics. Exposure to playgrounds with contaminated sand within 7 days of symptom onset was associated with illness (matched odds ratio 3.7, 95% CI 1.1–12.1). In May 2008, the local authority began closing sandboxes, replacing the sand, and reopening. A substantial reduction in the number of case-patients reported occurred (Figure 1), although new case-patients continued to be reported throughout the study period. 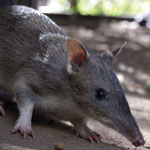 To better characterize the distribution of the bacterium in the local ecosystems, we collected fecal and cloacal samples from 261 free-ranging animals of various species (Table). Thirty-four isolates of S. enterica var. Java were identified: most were from a marsupial species native to the local area, the long-nosed bandicoot, Perameles nasuta (Figure 2). Phage and MLVA types were indistinguishable from human and environmental isolates. The Australian Registry of Wildlife Health had no recorded evidence of disease associated with the isolation of S. enterica var. Java from long-nosed bandicoots (K. Rose, Taronga Conservation Society Australia, pers. comm.).

The isolation of S. enterica var. Java from playground sand with the same phage type, MLVA pattern, and antibiogram as that of human isolates supported the hypothesis that ingestion of sand from playgrounds was the human exposure pathway for this outbreak. The case–control study found an association between infection in humans and exposure to at least 1 playground where an S. enterica var. Java isolate was found in the sand; these findings confirmed sand as the immediate source of infection. Although sand from the central depot was a common factor in all contaminated playgrounds where case-patients contracted the illness, the infection source for this facility remains unknown. It was located in a wild bushland setting, and it is feasible that transmission of the bacterium from local wildlife occurred.

Native animals and wildlife have been implicated in previous community-wide outbreaks of salmonellosis (9,10). The isolation of S. enterica var. Java of common phage and MLVA types from human, animal, and environmental samples implies that the organism can survive within multiple ecosystems. The organism probably has multiple transmission pathways, involving interactions among humans, animals, and the environment. The persistence of the bacterium in playground sand for up to 9 months demonstrates that the organism can survive for a relatively long period in this environment and might provide information about the natural history of the bacterium and how it can infect humans.

We detected S. enterica var. Java with the outbreak phage type and MLVA typing in cloacal swab specimens from 31% of native long-nosed bandicoots sampled (Table); illness in the animals was not apparent. It is unclear whether the bacterium has a predilection for this species or whether the bandicoot exhibits a particular behavior that predisposes it to being colonized. Further research is merited.

The study identifies accidental sand ingestion as a previously unrecognized pathway for humans acquiring illness caused by S. enterica var. Java and provides further evidence for the need to manage this medium in playgrounds to protect public health. The emergence of human disease caused by S. enterica var. Java from this environmental source and the local colonization of wildlife with the same bacterium highlights the consequences of the interface between human and wildlife health. Further research and a more extensive systematic sampling program that includes the local government area that was the focus of this study are required to better understand the ecology of S. enterica var. Java and the potential role of wildlife in sustaining human disease outbreaks. Ultimate control of the outbreak might require a strategy that involves altering human behavior, the environment, and wildlife habitat.

Dr Staff is a physician for the public health system of New South Wales, known as NSW Health, Sydney, and a clinical senior lecturer at the University of Sydney. His research interests include the public health aspects of communicable disease control and environmental health.

We thank the staff of the Microbiological Diagnostic Unit, University of Melbourne, for phage and MLVA typing of sand samples and phage typing human isolates; the staff of the Institute for Clinical Pathology and Medical Research, Westmead for MLVA human isolate typing; the Public Health Unit and Public Health Officer training staff for performing case-patient follow-up and interviews of controls; Taronga Wildlife Hospital for conducting preliminary microbial culture of many of the wildlife samples, and Jane Hall for her attention to detail in collating animal records; Ben Hope, Rachel Miller, Geoff Ross, and Ron Haering from New South Wales Office of Environment and Heritage for organizing the trapping of bandicoots in state parks; and the Australian Biosecurity Intelligence Network, for wildlife health information management and communication systems that contributed to this research.