Trends in Meningococcal Disease in the United States Military, 1971–2010 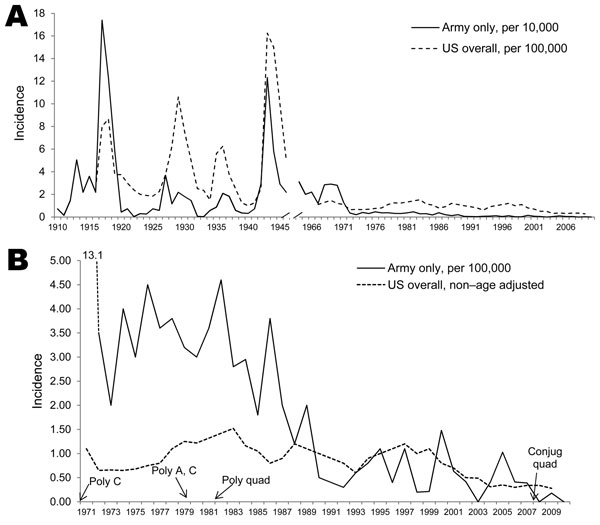 Figure 1. . . . Timeline showing 100 years of meningococcal disease incidence in the US population compared with members of the US Army (A) and effects of introduction of meningococcal vaccines (B; years in which the vaccine types were introduced into the military indicated by arrows). Rates are unadjusted for age matching. Data for the US Army and the general population for 1910–1946 from Brundage and Zollinger (2). General population data for 1967–1977 from Brundage and Zollinger (2) and for 1978–2009 from the Centers for Disease Control and Prevention (3). US Army data for 1964–1998 from Brundage et al. (1), 1999–2010 from personal communication with the Armed Forces Health Surveillance Center, and 2006–2009 from Naval Health Research Center Meningococcal Disease Surveillance. The incidence in the Army from 1982–1989 of 2.1 cases per 100,000 person-years was deduced from in Brundage et al. (1) by using the percentage of each military division’s percentage contribution to the total active-duty military populations during 1982–1989, with each year’s percentages estimated from those of the 1990–1992 average. These percentages were stable within ±2 percentage points during 1990–2006. Poly, polysaccharide; C, Neisseria meningitidis serogroup C; A, N. meningitidis serogroup A; quad, quadravalent (N. meningitidis serogroups A, C, W-135, and Y); conjug, conjugate.

Page created: August 15, 2012
Page updated: August 15, 2012
Page reviewed: August 15, 2012
The conclusions, findings, and opinions expressed by authors contributing to this journal do not necessarily reflect the official position of the U.S. Department of Health and Human Services, the Public Health Service, the Centers for Disease Control and Prevention, or the authors' affiliated institutions. Use of trade names is for identification only and does not imply endorsement by any of the groups named above.