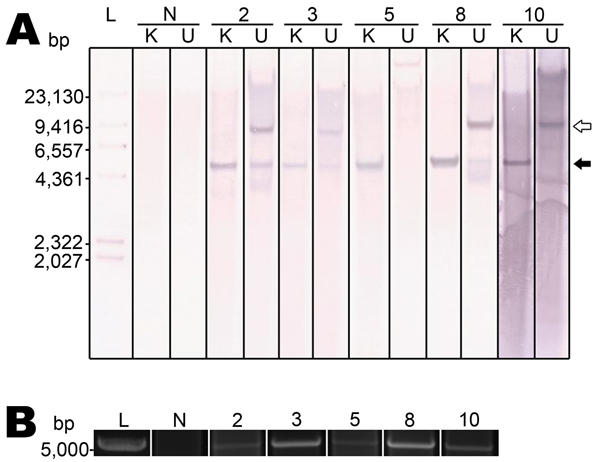 Figure 5. . Raccoon polyomavirus (RacPyV) is episomal in raccoon brain tumors as detected by Southern blot hybridization and rolling circle amplification. A unique KpnI site in viral protein 1 (Technical Appendix Figure 2) conserved across the viral genomes was predicted to linearize circular RacPyV DNA. Genomic DNA was KpnI digested and probed with a 799-bp probe designed to hybridize to large T-antigen (Technical Appendix Figure 3). A) Southern blot hybridization. DNA digested with KpnI (K) and undigested DNA (U) and hybridized with RacPyV_LT_Probe1 shows identical banding patterns in each tumor. In KpnI-digested samples, a single band appears at ≈5 kb (closed arrow), which is the expected position for linearized RacPyV genome. B) RCA applied to RacPyV DNA by using random hexamers was digested with KpnI. Amplification of the circular RacPyV genome occurred in the same cohort of samples that was successful for the Southern blot hybridization. L, DNA ladder; N, DNA extracted from a raccoon that did not have a brain tumor (i.e., normal raccoon).