To the Editor: Extraintestinal pathogenic Escherichai coli (ExPEC) bacteria have the ability to cause diverse and serious diseases, such as urinary tract infections (UTIs) and bacteremia (1–3); incidence of bacteremia is increasing globally (4). The emergence of multidrug resistance in E. coli is also becoming a global concern, with particular emphasis on E. coli sequence type (ST) 131, which is being increasingly reported in UTIs. Drug resistance is mediated by extended-spectrum β-lactamases (ESBLs), mainly of the CTX-M family, particularly CTX-M-15 and 14, and less frequently of the SHV and OXA families (5,6). Few studies are available regarding the characterization of E. coli strains causing bacteremia.

We characterized 140 E. coli isolates from bacteremia patients treated at Nottingham University Hospital (Nottingham, UK) over a 5-month period, with the aim of developing an epidemiologic profile of the population of ExPEC that causes bacteremia. For context, we compared the isolates with 125 E. coli isolates from urine samples collected during the same period. Cases were selected to include isolates from a diverse patient group: patient ages ranged from 1 month to 90 years; patient sex was evenly divided between male and female; infections were community- and hospital-associated; and suspected sources of infection varied. Antimicrobial drug susceptibility tests, PCR detection of ESBL genes, multilocus sequence typing using the Achtman scheme (http://mlst.ucc.ie/mlst/dbs/Ecoli), and virulence-associated gene (VAG) carriage screening by PCR were performed on isolates as described (7). 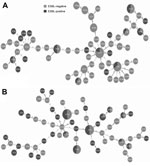 Figure. . . Minimum-spanning trees showing carriage of extended-spectrum β-lactamases (ESBL) in Escherichia coli isolates from urine samples (A) and samples from patients with bacteremia (B). Each circle represents 1 sequence type...

To investigate whether the differences in ST observations between bacteremia and urine isolates could be attributable to differences in virulence genes, VAGs of all isolates were screened by multiplex PCR. VAGs were found equally distributed across the 2 populations, with no statistically significant difference (p = 0.675). Comparison of serum resistance levels between urine and blood isolates also showed no phenotypic differences.

In conclusion, we found high levels of ESBL carriage and multidrug resistance in ExPEC isolates that cause bacteremia. A comparison with urine isolates provided evidence that ESBL-mediated drug resistance appears to be the selective pressure in the emergence of dominant STs in bacteremia. Future research should focus on identifying if prolonged antimicrobial drug treatment in bacteremia patients is leading to this selection.

We thank staff in the clinical microbiology laboratory at Nottingham University Hospitals for their assistance in isolate collection and Nicholas Gleadall and Kuan Min Chen for technical assistance in performing multilocus sequence typing PCRs.

This work was supported by a Kuwait Government and Kuwait Civil Service Commission scholarship awarded to F.A. and an East Midlands Development Agency iNET grant awarded to A.M. and M.D.

Page created: August 14, 2013
Page updated: September 16, 2013
Page reviewed: September 16, 2013
The conclusions, findings, and opinions expressed by authors contributing to this journal do not necessarily reflect the official position of the U.S. Department of Health and Human Services, the Public Health Service, the Centers for Disease Control and Prevention, or the authors' affiliated institutions. Use of trade names is for identification only and does not imply endorsement by any of the groups named above.