Although polio has not been reported from India since January 2011, spurts in the rate of nonpolio acute flaccid paralysis (AFP) are of concern. Therefore, other viral agents associated with AFP need to be identified, especially nonpolio human enteroviruses (HEVs), which are a major cause of neurologic illness.

The classic method for HEV serotypic identification requires virus isolation in susceptible cell cultures, followed by virus neutralization tests. However, the procedure is laborious, slow, and incapable of identifying new serotypes for which no reference antiserum is available (1). Nonpolio HEV typing based on viral protein (VP) 1 sequences has been developed and correlates well with antigenically defined serotypes (2).

Since 1998, we have been actively involved in polio surveillance and passively reporting nonpolio HEV activity in Uttar Pradesh State, northern India. Most nonpolio HEVs were isolated during the summer–autumn season and identified by using methods based on antigenic serotyping (3). We used a method combining a single cell culture passage with VP1 reverse transcription PCR (RT-PCR) and sequencing for rapid identification of nonpolio HEV serotypes. The predominant nonpolio HEV found was echovirus (E) 13, a serotype rarely isolated in India.

Nonpolio AFP case-patients showing signs of acute onset of focal weakness or paralysis characterized as flaccid (reduced muscle tone) and preceded by fever were considered for NPEV analysis. A total of 347 fecal specimens collected in Uttar Pradesh during March–August 2010 from children <15 years of age who had AFP symptoms were analyzed by using a modified World Health Organization (WHO) method (4,5).

Fecal specimens were processed according to the WHO protocol (4). Human rhabdomyosarcoma and L20B (mouse fibroblast cells expressing the poliovirus receptor) cell lines used for virus isolation were observed for cytopathic effect (CPE). The positive isolates with (enterovirus-like) CPE were tested by using pan-poliovirus and pan-EV RT-PCR (4). All poliovirus isolates characterized according to WHO algorithm were excluded from the analysis presented here. Viral RNA was extracted from the first-pass rhabdomyosarcoma cell suspension with the Viral RNA Mini Kit (QIAamp, QIAGEN, Hilden, Germany). Genotyping was done by RT-PCR of a portion of the VP1 gene and sequencing as described (2,6).

MEGA version 5.05 software (7) was used for phylogenetic analysis. Distance matrices of the nucleotide and amino acid sequences were analyzed with the MegAlign program in the Lasergene software package (DNASTAR, Madison, WI, USA).

E13 was the most common nonpolio HEV identified. Because E13 has rarely been isolated in India, we analyzed the Uttar Pradesh E13 isolates for March–August 2010 from 5 adjoining districts of western Uttar Pradesh (Lakhimpur-Kheri, Sitapur, Lucknow, Raebareli, and Hardoi). Clinical findings (Table 1) showed that 20 (67%) of the 30 patients had asymmetric paralysis at onset, including 3 AFP case-patients with fever at onset of paralysis and residual paralysis mimicking poliolike illness; however, when compared with other etiologies, no conclusion was inferred (Table 2). 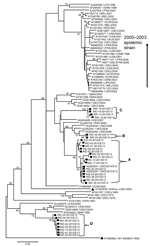 We demonstrated the utility of a modified WHO laboratory protocol by combining classical and molecular methods for rapid detection and identification of nonpolio HEV (2,4–6). Identifying the EV in mixed EV infections is challenging when this protocol is used, but on balance, pan-EV testing followed by VP1 RT-PCR and sequencing delivers rapid results and more efficient use of labor and resources than does the traditional method and enables identification of newer EV types.

We identified 8 nonpolio HEV serotypes (E4, E7, E13, E25, E33, EV75, CVB3, and CVB6). E13, the predominant serotype, has been isolated rarely (3,10); however, nonpolio HEVs have been reported from India in connection with sporadic and epidemic meningitis/encephalitis cases (11,12). A wide spectrum of illnesses have been reported with E13 (13), so finding E13-associated AFP cases mimicking poliomyelitis (14) is not surprising.

The global aseptic meningitis epidemic caused by EV13 during 2000–2003 was associated with a single E13 genotype (15); however, our findings indicate that several different and genetically diverse E13s have been cocirculating in India. The Uttar Pradesh E13 partial VP1 gene sequences are most closely related to recent E13 strains from central and southern Asia. The high genetic diversity among the Uttar Pradesh E13 isolated from patients in a local area over 6 months implies a continuous pattern of circulation. High-density human populations, immunologically susceptible cohorts, and nonhygienic environmental conditions probably facilitated the E13 genetic heterogeneity in our study.

Although we report a high prevalence of E13 infection in AFP case-patients, our study is restricted by the modest number of cases from a small geographic area sampled over a short period. The epidemiologic and nonpolio HEV genetic information gathered warrants further studies in larger groups of children to gain better insight into AFP caused by nonpolio HEV and to identify the etiologic nonpolio HEV type(s) associated with sporadic or epidemic AFP as India nears the goal of polio elimination.

Mr Maan is a research student at Sanjay Gandhi Postgraduate Institute of Medical Sciences. His research interests include the molecular detection and epidemiology of enteroviruses and emerging viral infections associated with AFP.

We thank the WHO Regional Polio Reference Laboratory at Sanjay Gandhi Postgraduate Institute of Medical Sciences, Lucknow, for AFP samples; and William Allan Nix for technical discussion and useful suggestions in the manuscript.

This work was supported by a grant-in-aid from the Indian Council of Medical Research, Ministry of Health and Family Welfare, Government of India, New Delhi, India (grant no. 3/1/JRF/69/MPD-2006 to H.S. M.).