To the Editor: Streptococcus suis, an opportunistic pathogen of swine, is an emerging zoonotic pathogen among humans (1). In Vietnam, S. suis is the leading cause of human acute bacterial meningitis (2). Infection in humans is associated with direct exposure to infected pigs or infected raw or undercooked pork products (3). Of the 35 S. suis serotypes, only a limited number are pathogenic for pigs, and clinical cases in humans have most frequently been attributed to serotype 2 (SS2) (1). In Vietnam during September 2006–November 2007, the carrier rate of S. suis among slaughterhouse pigs was 41% (222/542); SS2 was the most frequently identified serotype in 14% (45/317) of S. suis isolations (4).

Porcine respiratory and reproductive syndrome (PRRS) is a major disease affecting the swine industry globally; the severity of PRRS in pigs can be increased by co-infection with S. suis (5). In 2010, PRRS outbreaks in swine were reported in 49 of 63 Vietnamese provinces (Technical Appendix Figure) (6). To understand the potential implications of swine PRRS outbreaks for human S. suis disease, we investigated co-infections of S. suis and PRRS virus (PRRSV) in sick pigs in 3 provinces of Vietnam during the PRRS outbreaks in 2010 (Technical Appendix Figure).

We sampled 108 farms reporting pigs that had a clinical syndrome consistent with PRRSV infections in the provinces of Thai Binh (May), Tien Giang (July), and Soc Trang (July). Samples were blood from sick febrile pigs and postmortem tissue from freshly culled pigs. To confirm swine PRRS outbreaks, we performed reverse transcription real-time PCR on 1 randomly selected plasma sample from each farm (7). A total of 103 (95%) plasma samples from 103 farms tested positive for PRRSV (Chinese genotype). We additionally selected 3 PRRSV-positive farms per province for comprehensive PRRSV screening of all 42 sampled pigs; 100% of samples from the 9 farms were PRRSV positive. After swine outbreaks ended, blood samples from 52 healthy pigs from 10 farms that had no recent history of PRRS were collected from Tien Giang Province (March 2011). None of the 52 plasma samples from the 10 control farms tested positive for PRRSV.

We investigated the presence of SS2 in blood and tissue samples from pigs on PRRS- and non-PRRS–affected farms by bacterial culture (Technical Appendix Table). A total of 534 specimens from sick pigs yielded 9 (1.7%) SS2 isolates. One (2%) of 52 specimens from the healthy control pigs yielded a non-SS2 S. suis isolate. S. suis has been proposed to contribute to the spread of antimicrobial resistance genes to other human pathogenic streptococci (8). The antimicrobial susceptibility results of 9 SS2 isolates by disk diffusion (9) revealed a high prevalence (6/9, 66%) of resistance to tetracycline, tobramycin, enrofloxacin, and either marbofloxacin or chloramphenicol. 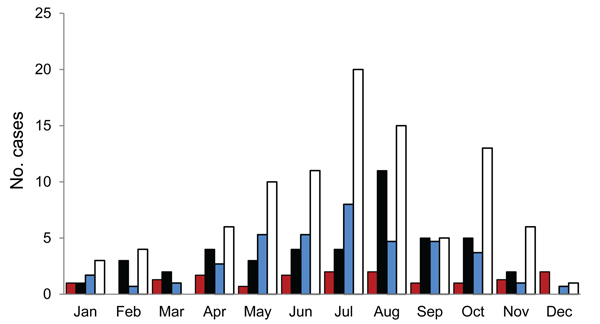 We demonstrated increased prevalence of systemic S. suis and SS2 infection in pigs co-infected with PRRSV during the 2010 swine outbreaks in Vietnam. The results indicate an increased risk for potential zoonotic transmission of S. suis to humans during outbreaks of PRRS in swine.

We thank the staff of the microbiology laboratory at the Oxford University Clinical Research Unit and Lam Tuan Thanh for their technical support; Nguyen Minh Le Hoa for monitoring sampling of the pigs in northern Vietnam; and technical staff from the Sub-Departments of Animal Health in Thai Binh, Tien Giang, and Soc Trang for sample collection.

This work was funded by an award to N.T.H. from the Department of Science and Technology in Ho Chi Minh City, Vietnam (226/HD-SKHCN), the European Commission (223498), the Li Ka Shing Foundation (China), and the Wellcome Trust (United Kingdom; VIZIONS strategic award 093724/Z/10/Z). S.B. was funded by Oak Foundation fellowship through Oxford University.