A new tentative lyssavirus, Lleida bat lyssavirus, was found in a bent-winged bat (Miniopterus schreibersii) in Spain. It does not belong to phylogroups I or II, and it seems to be more closely related to the West Causasian bat virus, and especially to the Ikoma lyssavirus.

Bats are the natural reservoirs for most lyssaviruses, and to our knowledge, only MOKV and IKOV have never been detected in bats. RABV is the only virus known to establish epidemiologic cycles in bats and carnivores, and it is responsible for most human infections, mainly transmitted by dogs. The genus Lyssavirus comprises at least 2 phylogroups: phylogroup I (RABV, DUVV, EBLV1–2, ABLV, ARAV, IRKV, BBLV, KHUV) and phylogroup II (LBV, MOKV, and SHIBV). Phylogroup III consists of WCBV (4). According to a recent phylogenetic reconstruction that included the novel IKOV and was based on a fragment of 405 nt from the nucleoprotein gene, IKOV has proven to be highly divergent (3) and probably also forms part of phylogroup III.

During 1977–2011 in Europe, 988 cases of bat rabies were reported to the Rabies Bulletin Europe. Bats of the species Eptesicus serotinus and E. isabellinus, which account for >95% of cases, are considered the major natural reservoirs of EBLV-1. Several bat species within the genus Myotis are reservoirs for EBLV-2, BBLV, and the central Asian lyssaviruses ARAV and KHUV (5). WCBV has been isolated in the common bent-winged bat Miniopterus schreibersii (6). Other bat species might act as eventual hosts, although in Spain, bat rabies has been declared only in E. isabellinus bats (7). The possibility of a wider host range has been suggested by some surveys on natural bat colonies of other bat species describing neutralizing antibodies and genomic fragments related to EBLV-1 (8).

In July 2011, a bat was found in the City of Lleida and taken to the Wildlife Care Center of Vallcalent (Lleida, Catalonia). The bat arrived lethargic and dehydrated, died soon after admission, and its carcass was frozen at −20°C. On March 12, 2012, as part of the rabies surveillance program in Spain, the bat carcass was received by the National Center of Microbiology, where rabies testing was conducted by 2 generic reverse transcription PCR (RT-PCR) methods for lyssavirus detection (9,10) and 2 commercial rabies antiserum assays (Bio-Rad Laboratories, Marnes La Coquette, France; and Fujirebio, Inc., Tokyo, Japan) for antigen detection by fluorescent antibody testing.

Brain smears were positive for lyssavirus by RT-PCR and fluorescent antibody testing, and an oropharyngeal swab sample was positive by RT-PCR. Further attempts to isolate the virus by tissue cultures were unsuccessful after 2 blind passages in BHK-21 and murine neuroblastoma cells. The negative results could be explained by the fact that the sample had been stored at −20°C for 8 months and had been frozen and thawed twice before cell culture testing; however, the possibility of the cell lines not being permissive for the virus cannot be excluded.

The bat was morphologically identified as a bent-winged bat (M. schreibersii) and genetically identified by cytochrome b sequencing (11). The genomic sequence of the corresponding fragment of the diagnostic RT-PCR on the conserved region of the nucleoprotein gene, determined by BLAST (http://blast.ncbi.nlm.nih.gov/), showed no substantial sequence similarity to previously known lyssaviruses. 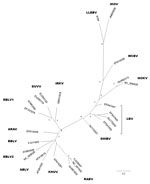 Figure. . Phylogenetic reconstruction based on the first 405 nt of the nucleoprotein gene, including all representative lyssaviruses. The tree was obtained by Bayesian inference, and the first 25% of trees were...

To determine the identity of the lyssavirus, we sequenced a larger fragment (565 bp), including the variable codifying region of the nucleoprotein gene (GenBank accession number submitted). We reconstructed an overall phylogeny of lyssaviruses by using a Bayesian Inference with the first 405 nt of the N-gene and MrBayes version 3.1.2 (http://mrbayes.csit.fsu.edu/). Two simultaneous runs of 106 generations were conducted, each with 4 Markov chains, and trees were sampled every 100 generations. The best-fit nucleotide model, GTR + I + G, available in MrBayes was selected according to the corrected Akaike information criterion. The phylogenetic reconstruction was based on a dataset representative of all known lyssaviruses, including the recently described IKOV. The topology obtained showed that this sequence is more closely related to IKOV and WCBV than to the lyssaviruses in phylogroups I and II (Figure). These results suggest that this sequence tentatively belongs to a new Lyssavirus species named after the location of collection, Lleida bat lyssavirus (LLEBV).

The lyssavirus-specific antigen reactivity and association with a genomic sequence found in a bent-winged bat in northeastern Spain could be derived from the tentative new virus LLEBV. According to our phylogenetic reconstruction, the virus does not seem to belong to phylogroup I, which comprises most bat lyssaviruses, or to the African phylogroup II. The evolutionary relationships between the LLEBV sequence with WCBV and IKOV sequences need to be clarified before it can be determined whether they form >1 different phylogroups.

Of note, the new LLEBV was detected in M. schreibersii bats, as was WCBV, the other European lyssavirus outside phylogroup I. The genus Miniopterus has traditionally been considered to belong to the family Vespertilionidae as do other bat genera linked to lyssaviruses in Eurasia (Eptesicus, Myotis, and Murina). However, recent molecular analyses have confirmed that the genus Miniopterus belongs to the family Miniopteridae (12). M. schreibersii bats are migratory, widely distributed across southern Europe and Eurasia. Large numbers (thousands) of these bats overwinter in caves and move in the spring to different and sometimes distant summer roosts for reproduction (13). These ecologic features make it relatively easy for an infectious agent to quickly spread out within and among the populations.

Consequently, it is difficult to imagine that WCBV or LLEBV are locally restricted; both could be located far from where they were found. Neutralizing antibodies against WCBV have been found in bats in Africa (14). The cumulative description of new bat lyssaviruses in recent years shows the convenience of always using generic amplification primers for rabies diagnosis based on RT-PCR to complement antigen detection.

No human exposure to the new virus has been reported. However, because of the divergence exhibited by LLEBV and IKOV, and the growing evidence of inadequate protection/cross-neutralization against viruses outside phylogroup I, the effectiveness of current rabies vaccines remains for these viruses a concern (15).

We thank the Genomics Unit of the Instituto de Salud Carlos III for the analyses of the genomic sequences.

This research was financially supported by project no. SAF 2009-09172 of the General Research Program of the Spanish Ministry of Science and Education. C.R.N. was supported by a research fellowship from the Universidad de Alcalá de Henares.