In recent years the prevalence of Bancroftian filariasis has increased dramatically in the Nile delta (1). The resurgence is believed to be associated with an increasing accumulation, in and near villages, of surface and subsurface water that serves as breeding sites for Culex pipiens mosquitoes. This water increase could be due to the growing number of irrigation channels and to more reliable water supply and distribution since the Aswan High Dam was completed in 1971.

A correlation between remotely characterized environmental features and the distribution of some “focal” diseases (2) has been suspected; however, no direct association has been reported. Intermediate factors affecting disease distribution, such as vector abundance (3,4) and risk for disease transmission (5), have been described. Recently, we examined diurnal temperature difference (dT) maps derived from the advanced very high resolution radiometer of the polar-orbiting National Oceanographic and Atmospheric Administration environmental satellite in relationship to the distribution of schistosomiasis in the Nile delta (6). dTs are derived from thermal scanning radiometry, and they indicate surface and subsurface moisture contained in the soil and plant canopy. The distribution of schistosomiasis has been stable for decades, which suggests that infection prevalence relates to intermediate host snail abundance which in turn is influenced by environmental moisture factors. Because dT values are associated with surface moisture and standing water, we hypothesized that those values should correlate well with the distribution of Bancroftian filariasis cases. We report here the initial test of this hypothesis. 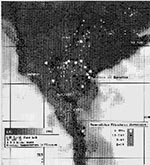 First, we determined the prevalence of Bancroftian filariasis between 1985 and 1993, by surveying 297 villages in the southern Nile delta (1). Prevalence was determined on the basis of microfilaremia diagnosis and on the presence of filarial antigenemia and clinical evidence of prior infection, or both. We grouped the prevalence data into four categories (0% to 1%, 2% to 9%, 10% to 19%, and 20+%), and used approximate village coordinates to plot the results on a map. Next, a more accurate version of this map (provided by one of the authors) was digitized to create a file of village latitude and longitude coordinates; this file was overlaid onto the dT map with TeraScan software (SeaSpace Corporation, San Diego, CA) (Figure).

Satellite image data from the advanced very high resolution radiometer from August 16, 1990, were analyzed by using TeraScan to determine dTs for the southern Nile delta. The time of data collection was approximately 01:00 and 13:00 hours, local time. Point dT values were averaged for 3 x 3 pixel areas (10 km2), centered on the latitude and longitude of each study site to reduce false precision of individual pixels. Digitized filariasis prevalence data were superimposed and assigned mid-point values for each of the four prevalence categories (0.5%, 5%, 15%, and 25%, respectively). The number of villages assigned to each of these categories, respectively, was 169, 74, 37, and 13. Four villages in the 0% to 1% prevalence category fell beyond the southern border of the computerized dT map.

Single factor analysis of variance between the four categories showed that for the four groups, values were significantly different (F = 5.42, p = .0012). Stepwise polychotomous logistic regression was used to model prevalence by using the dT value as the only predictor. The model that predicts prevalence showed significant improvement for each of the three prevalence levels over the (negative) reference category of 0.5% (improvement, X2 = 17.11, p = .002).

The high degree of correlation between the remotely sensed dT values and the “ground truth” filariasis prevalence data was unexpected, considering the low resolution of the data and the relative imprecision of the village coordinates. We are now gathering data on the precise numerical prevalence level for each village and are using a hand-held global position system receiver in the villages to obtain exact coordinates. Because the effect of random error due to the imprecision of the measurements can only diminish correlations, we anticipate that more precise data will result in even closer associations.

Our efforts are directed towards prospectively determining the predictive power of dT with respect to the village-specific prevalence of Bancroftian filariasis from adjacent parts of the Nile delta for which prevalence data are not yet available. Ultimately, we hope to determine the degree to which dT values, which are available for much of the earth's surface, can be used to signal the presence of Bancroftian filariasis in the Nile delta and perhaps in other disease-endemic regions.