Sentinel Surveillance for Yellow Fever in Kenya, 1993 to 1995 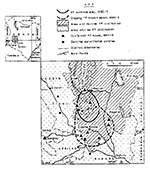 Yellow fever (YF) is an acute mosquito-transmitted viral infection, endemic and occasionally epidemic in many countries of Africa and South America. Periodic outbreaks of yellow fever in East Africa have been reported since 1940 (1,2) (Figure 1). The largest outbreak, an estimated 300,000 cases, occurred from 1960 to 1962 in Ethiopia (3). In 1966, YF reappeared in Arba-Minch, Ethiopia, east of Lake Abaya, in an area not affected by the outbreak of 1960 to 1962. During the 1966 outbreak, 2,200 cases (450 deaths) were reported (4). Despite the prevalence of anti-YF antibody in northern Kenya (up to 14%) (5,6), no outbreaks of YF were reported in Kenya until 1992 when epidemic YF emerged in Kenya for the first time, with at least 54 cases and 29 deaths (7). Cases of hemorrhagic fever were first reported in September 1992, from the southern parts of Keiyo (Kerio Valley), Baringo, and the Koibatek Districts (former Elgeyo-Marakwet and Baringo districts) in the Rift Valley Province, northwest Kenya (Figure 2). Of the 54 patients with hemorrhagic fever, 35 (67%) were male. Of the 48 patients whose definite age was known, 41 (85%) were 10 to 39 years old. Twenty-one (39%) of the 54 patients had serologic evidence of recent YF infection, and three of the 21 had cases confirmed by isolation of YF virus. The outbreak ended when the entire population of these districts was vaccinated. A surveillance system involving 13 sentinel sites was established 6 months after the epidemic was over. Six health facilities were located within the outbreak area of Keiyo, Koibatek, and Baringo districts. Seven facilities were situated in the surrounding areas of Nakuru, Nyandarua, Kericho, and the Uasin Gishu districts. In 1994, the number of sentinel sites was increased to 18. Sentinel facilities were provided with case investigation forms and equipment for blood collection and storage. Surveillance activities were ongoing, and supervisory visits were conducted once every 6 weeks.

In Kenya, there are three levels of health care delivery: hospitals, health centers, and dispensaries. In addition, missionary hospitals provide independent health services. Surveillance training candidates were selected from district hospitals, health centers, and mission hospitals. Training focused on case recognition, record keeping, use of a YF case investigation form, handling of serum samples, and obtaining exposure information. A field guide for YF surveillance was developed in collaboration with the World Health Organization (WHO) and the Centers for Disease Control and Prevention (CDC). A 1-day training workshop was followed by a visit to the collaborating surveillance centers. Medical staff at the health facility who could not attend the workshop received on-the-job training. A surveillance team consisted of a medical officer (or scientist from the Virus Research Centre), a laboratory technologist, the provincial public health officer from Rift Valley Province, and a driver. In October 1994, a second 1-day training workshop was offered for five additional sentinel health facilities. For surveillance purposes, a patient was considered to have a case of YF if two of the following symptom complexes were present: jaundice; hemorrhage; signs of encephalitis or renal involvement; a temperature >= 38°C.

Serum was separated from blood samples on the day of collection and stored frozen, until the serum specimens could be transported by the surveillance team. Vaccine carriers with ice packs were used to transport samples (along the surveillance route) to the Kenya Medical Research Institute (KEMRI). In 1994, a liquid nitrogen container was added for transporting samples. Samples were tested for YF antibodies by the IgM-capture enzyme-linked immunosorbent assay (MAC ELISA) (8) at the Virus Research Centre. Selected acute-phase surveillance samples were also subjected to virus isolation attempts, in which newborn mice and tissue cultures were used. All serologic results were confirmed by either CDC's laboratory in Fort Collins, Colorado, or the Institute Pasteur, Paris. Persons whose illness met the surveillance case definition were considered positive for recent YF infection if YF-specific IgM antibody was present in acute-phase serum samples by MAC ELISA. Samples that were borderline positive by IgM MAC ELISA were tested for neutralizing antibody by the plaque reduction neutralization test with YF virus. Results of this sentinel surveillance from October 7, 1993, to December 31, 1995, are reported here.

Timely reporting of disease emergencies is not feasible through the existing health information system in Kenya. When YF emerged there in September 1992, disease investigation was delayed, and the diagnosis was not confirmed until January 1993. In the case of a limited health information system, sentinel surveillance for YF, with active follow-up by collaborating centers, seems appropriate for monitoring disease after an epidemic.

Most patients surveyed had fever and jaundice. All patients with confirmed YF cases had jaundice, and 50% hemorrhaged from the nose and gums. Mild, nonspecific, and nonfatal clinical forms of yellow fever may have gone unnoticed as they did during the 1992 to 1993 epidemic when YF virus was isolated from a 12-year-old girl, who had fever, headache and joint pains but no jaundice or signs of hemorrhagic illness. (Outbreak of YF in Kenya, 1992-1993 Epidemiological Investigations, Sanders et al., in preparation).

The continued low-level of transmission of YF virus would likely have gone unnoticed if the enhanced surveillance and diagnostic capacity instituted by the government of Kenya after the 1992-93 epidemic was not in place. When cases of YF were confirmed from an area not known to have been affected during the outbreak, the Kenya Ministry of Health quickly recognized the problem and resumed vaccinations (9,10).

Operational costs of the field visits to 18 sentinel sites are relatively high. Since nine (90%) of the confirmed cases of YF were recognized by three hospitals, which had cared for YF patients during the previous epidemic, limiting the number of sentinel sites may be considered. Distributing materials to obtain blood from persons with suspected cases does not seem feasible countrywide.

The WHO initiative to create a global surveillance program for recognition of and response to emerging diseases emphasizes that a critical element of surveillance includes a network of reference centers that assist national services in disease diagnosis and investigation (11). In Kenya, the first steps have been taken to establish such a reference center at KEMRI in Nairobi. In 1994, two technologists were trained for an extensive period at CDC's laboratory in Fort Collins, Colorado, in the diagnosis of YF and other arboviral diseases. An epidemiologic support unit was established at the KEMRI laboratory to provide the link between possible disease occurrences in the field and the diagnostic facilities at the distant laboratory.

Will this effort ensure that future epidemics will be recognized? It is often argued that the critical element of surveillance is disease recognition by front-line health-care providers, subsequent investigation, sample collection, and the forwarding of samples to available diagnostic facilities. In Kenya there is no focus on what diseases should be reported immediately (monthly disease reporting at district level requires health care workers to compile information on 37 diseases). Communication between the field and laboratory is often difficult. Once a specimen is forwarded, results often do not reach the clinician who submitted the sample in a timely fashion. Separate disease monitoring systems have been initiated by different health programs, but they rely on the same district officers to fill out the forms. Admittedly, sentinel surveillance for YF has not been integrated into one of the existing disease control programs, and its sustainability as anything more than a research program is questionable.

Hemorrhagic fever surveillance can be improved by 1) arranging sentinel sites according to the presumed southward extension of the YF-endemic area, 2) managing supervision of the sentinel sites at provincial level, 3) integrating disease reporting for YF in the surveillance system for EPI target diseases, 4) clearly defining which diseases need to be actively monitored by health care providers, 5) instituting improved diagnostic capabilities, and 6) forming a disease outbreak team.

Transmission of YF poses a potential threat for the largely unvaccinated population of Kenya and other East African countries, especially since the YF-endemic area appears to be expanding (12). YF vaccination appears to be the only practical public health intervention. Vaccination of children 6 months of age and older in the YF-endemic districts (Keiyo, Marakwet, Baringo, and Koibatek) should be continued. Districts adjacent to the disease-endemic area (Uasin Gishu, Kericho, Nandi, and Nakuru) should be included in the vaccination program.

We thank our colleagues at the Centers for Disease Control and Prevention (CDC) and at the Institute Pasteur for confirming our preliminary serologic results; the medical staff at the sentinel surveillance facilities, the Kenya Ministry of Health, and the Kenya Medical Research Institute (KEMRI) for their continued support for this program. Special thanks go to Dr. Duane Gubler and his staff at the CDC laboratory in Fort Collins, Colorado, for training two of KEMRI's senior technologists during a 4-month period in 1994.

Sentinel Surveillance for Yellow Fever in Kenya, 1993 to 1995