We observed an increase in the ratio of pathogenic Babesia microti to B. odocoilei in adult Ixodes scapularis ticks in Maine. Risk for babesiosis was associated with adult tick abundance, Borrelia burgdorferi infection prevalence, and Lyme disease incidence. Our findings may help track risk and increase the focus on blood supply screening.

Babesiosis caused by Babesia microti is a potentially life-threatening parasitic infection transmitted by Ixodes scapularis, the deer, or black-legged, tick; it is of increasing concern as a transfusion-acquired illness (1,2). Since its recognition on Nantucket Island and Cape Cod, Massachusetts, USA, during the 1970s (3), human babesiosis from B. microti infection has become a public health threat in an increasing number of foci in the northeastern and upper midwestern United States (1). Risk for infection by B. microti remains geographically more localized than for other pathogens transmitted by I. scapularis ticks, such as Borrelia burgdorferi (4–6). This localization may be associated with dense populations of I. scapularis ticks and high prevalence of B. burgdorferi in ticks (6,7). Therefore, entomologic data may help predict risk for human babesiosis (6).

The presence of B. microti–infected ticks in Maine was first documented in 1995 from a town in which Lyme disease was endemic (7,8). The first case of human babesiosis reported in Maine occurred in 2001, 15 years after the first case of Lyme disease occurred in the state (8,9). A transfusion-associated case of babesiosis in2007 originated from a blood donor in Maine (10). We report on the geographic and temporal expansion of babesiosis in Maine, entomologic correlates of its emergence, and the seroprevalence of Babesia spp. in blood donors from the 2 southernmost coastal counties. 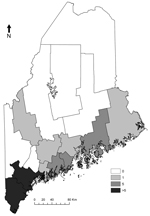 We obtained the number of human cases of babesiosis and Lyme disease cases per year and county during1995–2011, from the Maine Center for Disease Control (Table 1) and obtained census data (http://quickfacts.census.gov/qfd/states/23000lk.html) for the years 2000 and 2010. We calculated incidence (cases/100,000 population) using the census for the year 2000 for 1995–2004 and the 2010 census for 2005–2011 (Table 1). Early (2001–2004) babesiosis cases occurred in the 2 southernmost coastal counties, but since 2005, cases have been reported in 8 additional counties, including 2 noncoastal counties (Figure 1). In addition to treatment with antiparasitic drugs, several severely ill patients underwent exchange transfusion. No deaths were reported.

For the period of 1995–2001, we reviewed published and unpublished data regarding presence of Babesia spp. in ticks tested by endpoint PCR (n = 1,433) (7–9) (Table 2). We examined data from all towns sampled, but to minimize spatial bias, we also examined data only from the town of Wells, from a site sampled in each study. Host-seeking adult ticks made up 66% of the samples, and fed nymphs made up the remainder (8) (Table 2). We tested for Babesia spp. in ticks using Feulgen stain (7–9), PCR (7–9,11), or both (Table 2). In Maine, I. scapularis ticks are known to harbor 2 Babesia spp: B. odocoilei (a deer parasite, presumed to be nonpathogenic to humans) and B. microti (7). However, 18s rRNA sequences (GenBank accession nos. AF028346, AF028343, respectively) to differentiate the species were difficult to obtain because of low DNA concentrations in some samples. Thus, for each study, we calculated the proportion of B. microti to B. odocoilei as the number of B. microti–positive ticks divided by the number of ticks positive for either B. microti or B. odocoilei (Table 2). Analyzing data from all towns sampled or only Wells, we observed an apparent increase in the ratio of B. microti to B. odocoilei over time that corresponded with the 2001 appearance of and subsequent increase in reported cases of babesiosis (Table 1). B. microti was documented in ticks only from the 2 southernmost counties. 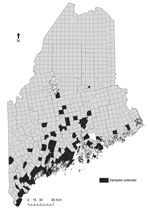 Mather et al. (5) used logistic regression to demonstrate that abundance of questing nymphal I. scapularis ticks (nymphs per hour) of 19–135/hour in wooded areas predicted a ≥20% probability of human babesiosis cases in Rhode Island. Using SAS 9.2 (SAS Institute Inc., Cary, NC, USA), we examined the 20% probability of a babesiosis case as a function of adult ticks collected per hour, B. burgdorferi infection prevalence in adult ticks, or Lyme disease incidence.

With approval from the Maine Medical Center Institutional Review Board, and in collaboration with Coral Blood Services, Inc., (Scarborough, ME, USA) blood samples from healthy donors were de-identified and screened for Babesia antibodies during July–December 2010. Using postal codes, we selected 311 donors from the 2 southernmost Maine counties (Cumberland and York) where I. scapularis ticks are more abundant than elsewhere in the state (13). Samples were tested via indirect immunofluorescent antibody (IFA) tests as per Krause et al. (14) by using serum diluted 1:64. Of 311 blood samples, 10 (3.2%) tested positive for Babesia antibody (IgG), which is in the middle of the range for blood donors in the northeastern United States (0.2% in areas where babesiosis is not endemic to 7.3% in highly disease-endemic areas [15]). When serum samples were IFA-positive, DNA was extracted from the corresponding whole blood sample at the Yale University School of Public Health laboratory for real-time PCR (Peter Krause, proprietary protocol). B. microti DNA was not detected in any of the 10 antibody-positive serum specimens.

Early studies revealed a higher ratio of presumed nonpathogenic B. odocolei to B. microti in areas where these species co-exist. The observed temporal shift to B. microti in questing adult and fed nymphal I. scapularis ticks in this review could be related to ecologic change, or to sampling bias (7). Adult I. scapularis tick abundance, B. burgdorferi infection prevalence among these ticks, and Lyme disease incidence may assist in the prediction of human babesiosis risk. The association observed between number of babesiosis cases and adult I. scapularis tick abundance was on a scale similar to that found by Mather et al. (5), although that study used nymphal tick abundance. IFA positivity for Babesia spp. IgG antibody at >1:64 has a high specificity (90%–100%) (14), but its predictive value is uncertain because disease prevalence is unknown for healthy blood donors. As human babesiosis emerges in Maine, refined models correlating babesiosis cases with tick abundance or Lyme incidence, or both, may help track geographic risk and permit targeted screening of the blood supply.

Dr Smith is Program Director of Infectious Disease at the Maine Medical Center, co-director and co-principal pnvestigator of the Vector-borne Disease Laboratory at the Maine Medical Center Research Institute, and Clinical Professor of Medicine at Tufts University School of Medicine. He has a long-standing interest in the epidemiology and ecology of vectorborne diseases.

We thank numerous volunteers and technicians who collected ticks in the field, and scientists who tested ticks in several laboratories. We thank Jacquelyn Hedlund of Maine Center for Cancer Medicine and Bruce Cahill of the Maine Medical Center; the staff of Coral Blood Services, Inc. (formerly of Scarborough, Maine); Anne Breggia, Elizabeth McMenamin, and Ellen McMonagle of the Maine Medical Center Research Institute Research Laboratory Services Core Facility; Diane Caporale of the University of Wisconsin-Stevens Point; Peter Krause and Lindsay Rollend of the Yale University School of Public Health, and Carol Mariani of the DNA Analysis Facility at Yale University. We thank the Maine Center for Disease Control for data and Linda B. Turcotte for administrative support. We also thank the numerous private landowners, land trusts, and town governments, and the Wells National Estuarine Reserve and the State of Maine for access to private and public lands for field collections. The Mentored Research Committee of the Maine Medical Center Research Institute provided financial support for portions of this study.