Bartonellae are vector-borne gram-negative, aerobic, intracellular bacteria with a tropism for erythrocytes and endothelial cells (1). These bacteria, many of which are zoonotic, infect a wide range of domestic and wild animal species, causing a spectrum of disease manifestations and pathologies (2). Bartonellae, especially Bartonella vinsonii subsp. berkhoffii (B. v. berkhoffii), cause valvular endocarditis, especially of the aortic valve in mammals, including humans, dogs, cats, and cattle (1,3). Fleas and possibly ticks can vector B. v. berkhoffii (4). Bartonella species, typically observed in 5- to 7-year-old mid-sized to large dogs, account for ≈28% of endocarditis in dogs (3,5). Bartonellae, including B. v. berkhoffii, account for ≈3% of human endocarditis cases (1,6). In dogs and humans, these bacteria appear to have a specific tropism for aortic and mitral valves (1). Similar to lesions that develop with Coxiella burnetii endocarditis (7), valvular vegetative lesions can result from chronic Bartonella infection.

In California, coyotes (Canis latrans) are a major reservoir for B. v. berkhoffii (8). Natural Bartonella reservoir hosts are often asymptomatic, but to our knowledge, the possible role of Bartonella-induced endocarditis in coyotes has never been investigated. We hypothesized that B. v. berkhoffii or other Bartonella species could cause endocarditis in coyotes. We also hypothesized that bartonellae might preferentially localize to the aortic and/or mitral valves before vegetative lesions develop. Hence, coyotes served as a naturally occurring epidemiologic and physiologic sentinel model for studying infection kinetics and pathology induced by this bacterium in a reservoir host (coyotes).

During the early 2000s, a total of 70 coyotes trapped in 9 northern California counties as part of a depredation control program were assessed for zoonotic heartworm (Dirofilaria immitis) disease (9). Coyote hearts and spleens were collected at that time and stored at –70°C in a manner to avoid DNA carryover during handling, storage, and processing. In 2012 and 2013, the hearts were dissected for macroscopic evidence of aortic and mitral valve vegetative endocarditis lesions. A board-certified veterinary pathologist examined possible valvular lesions or thickened regions; however, because the samples had been frozen, microscopic histopathologic examination was not conducted. We extracted DNA from aortic and mitral valves and spleens using DNeasy Blood and Tissue Kits (QIAGEN, Hilden, Germany). B. v. berkhoffii–spiked rabbit blood was the DNA extraction positive control. We tested extracted samples by PCR for Bartonella DNA targeting the citrate synthase gene (gltA) (10). PCR of spleen tissue was a substitute for blood culture detection of bacteremia. B. henselae DNA and distilled water were PCR-positive and -negative controls, respectively. Partial gene sequencing was performed on PCR-positive tissues. Nineteen aortic valve, mitral valve, and splenic DNA samples from 14 coyotes (B. v. berkhoffii PCR-positive animals by gltA PCR and sequencing) were genotyped by using primers targeting 16–23S intergenic transcribed spacer (ITS) region, as previously described (11) with minor modifications in annealing temperature (68°C for 15 s) and extension (72°C for 18 s). We conducted statistical analysis for differences in tissue tropism using Epi Info version 6 (Centers for Disease Control and Prevention, Atlanta, GA, USA). 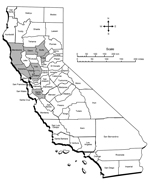 Figure. Molecular prevalence of Bartonella species in 70 coyotes from 9 counties, California, USA. Shaded areas are counties where coyotes were trapped during the early 2000s. Bartonella-positive coyotes were identified from the...

We found no gross vegetative aortic or mitral valvular endocarditis lesions. Fifteen (21%) coyotes tested positive by PCR for Bartonella gltA gene. Overall, 8 aortic valves, 5 mitral valves, and 4 spleens were PCR positive. Aortic and mitral cardiac valves of 1 coyote (no. 93) tested positive by PCR for B. v. berkhoffii, and the aortic valve and spleen of another coyote (no. 110) were PCR positive (Table). Although a higher percentage of positive cardiac valves were aortic (53%) than mitral (33%), the difference was not significant. However, when we compared the number of Bartonella-infected cardiac valves (11 valves) with Bartonella-infected spleens (3 spleens), we found that Bartonella DNA was amplified 4.16 times (95% CI 1.02–24.12) more often from cardiac valves than from spleens.

Our study documents the presence of 3 zoonotic Bartonella species in heart valves and/or spleen of free-ranging coyotes from northern California. Despite the absence of gross vegetative endocardial lesions, Bartonella DNA was amplified and sequenced from >20% of the coyotes, mainly from cardiac valves; only 4 (6%) coyotes had PCR-positive spleens, compared with 12 (17%) coyotes with PCR-positive cardiac valves. We hypothesize that Bartonella in the spleen indicated early or ongoing bacteremia, whereas bartonellae in the heart valves, in their absence in the spleen, indicated valvular bacterial localization, possibly facilitating persistent infection that could evolve through time to endocarditis. This evolution has been observed for C. burnetii infection in humans (12), for which the mean reported interval from illness onset to endocarditis diagnosis is 12–24 months (7). Bartonella endocarditis is usually seen in middle-aged dogs (mean age 6.3 years ± 2.8) (3,5) and in adult humans (mean age 54 years ± 16) (6). Because 93% of the PCR-positive coyotes were <3 years old, they were very likely too young for vegetative endocarditis to have developed.

Nevertheless, the fact that ≈20% of the cardiac valve tissues were PCR positive for Bartonella perhaps indicates that the bacteria had localized to the valves of infected coyotes. B. v. berkhoffii can induce vasoproliferative lesions in animals (13); thus, cases of Bartonella endocarditis might represent only a small fraction of infected animals that have chronic cardiac valvular localization. All 3 B. v. berkhoffii genotypes identified in these coyotes have been previously involved in humans or dogs with endocarditis (14,15). To our knowledge, B. henselae and B. v. berkhoffii genotype III have not been previously identified in coyotes; thus, these mammals can be added to the list of susceptible species. Coyotes might be a natural reservoir for B. v. berkhoffii genotype III, which so far has been mainly described in California gray foxes (14).

Mr Kehoe is a fourth-year veterinary student at the University of California, Davis. His primary research interests include zoologic and wildlife medicine and health and emerging zoonotic infections.