To the Editor: The teratogenic Schmallenberg virus (SBV) (genus Orthobunyavirus) was detected in bovine semen in a recent German field study (1). Vector-borne transmission by Culicoides spp. biting midges is most common (2), but venereal transmission of SBV might contribute to the spread of this virus to previously unaffected regions. We investigated the infectivity of SBV RNA–positive semen by experimental subcutaneous injection of cattle and interferon α/β receptor–deficient (IFNAR−/−) mice (3). 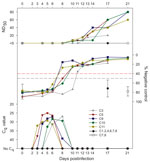 Commercially produced semen straws with egg yolk–based diluent were used for the injection of 6- to 9-month-old heifers. The straws originated from 6 semen batches (quantification cycle [Cq] values 26.4–36.4) collected from 6 bulls (designated A–C and E–G) during August and September 2012 (1). To increase the probability of SBV infection of injected cattle, 5 straws of semen (≈220 µL each) from 1 batch from an individual bull were pooled and diluted in minimal essential medium with antibiotics to 4 mL. Six cattle (C1–6) were subcutaneously inoculated, each with a pool from 1 of the 6 bulls. To investigate the infectivity of a single insemination dose (1 straw), 5 cattle (C7–C11) were subcutaneously injected with single straws from bull F that had been confirmed to contain infectious SBV. Serum samples were obtained on several days (Figure), and clinical signs and rectal body temperatures for the injected cattle were monitored daily.

In addition, 20 SBV RNA–positive semen batches (Cq 25.9 to 36.5) collected from 11 bulls (A–K) during August–November 2012 (1) were subcutaneously injected into 40 IFNAR−/− mice (4–6 weeks old). For each batch, 2 mice were each injected with half of a semen straw (80–120 µL). All mice were monitored clinically and weighed daily. Samples of serum, liver, and spleen were harvested immediately after euthanasia at 22 days postinjection (dpi).

SBV infection was confirmed in 5 of 11 injected cattle: C3, C5, and C9–C11. SBV RNA (Cq 25.0–29.3) was first detected in serum at 3 to 6 dpi and persisted for 2–4 days. Seroconversion occurred at 8–12 dpi (Figure). None of the SBV-infected animals showed obvious clinical signs or fever; this finding is in accordance with reports of subclinical SBV infection in adult cattle (5–7). Samples from the other 6 cattle and all IFNAR−/− mice had negative results (data not shown).

The 2 infectious semen batches contained moderate (Cq 26.4) or low (Cq 34.2) viral loads of SBV RNA, indicating that a high sensitivity is required for reliable SBV RNA detection in semen samples (1). The onset of SBV infection in the 3 animals injected with single semen straws ranged from 3 to 5 dpi, and not every straw was infectious, although biologic and technical replicates of straws from 1 semen batch showed similar PCR results (data not shown) (1). Possible explanations for differences in the infectivity of individual straws are that the viral RNA load of an SBV-containing straw does not necessarily correlate with infectivity or that the infectivity of 1 straw is lower than the minimal cattle infectious dose for SBV. Cattle might be more susceptible than IFNAR−/− mice to infection, particularly when SBV titers are low or borderline (7, 8). Therefore, we cannot exclude the possibility that the semen batches tested only in IFNAR−/− mice might be infectious for cattle or that semen samples with higher SBV titers might be infectious in the mice.

We used subcutaneous injection of SBV RNA–positive semen to demonstrate infectivity because this transmission route has a high sensitivity for proving infectivity of SBV-containing samples (7). However, the possibility of intrauterine SBV infection of dams is unknown. Oro-nasal inoculation of 2 calves did not result in SBV infection of the animals (5), which suggests that mucosal in utero infection with SBV-containing semen is unlikely. In contrast, viremia was detected in most cows that were artificially inseminated and simultaneously inoculated in the uterus with cell culture–passaged Akabane virus, a teratogenic orthobunyavirus closely related to SBV (9). Intrauterine lesions caused by insemination or breeding might therefore increase the risk for SBV infection.

In conclusion, we demonstrated that SBV RNA–positive bovine semen could contain infectious SBV. However, the actual risk for transmission of SBV by insemination of dams with SBV-containing semen remains to be evaluated. Although SBV infection of the developing embryo is unlikely, venereal transmission would lead at worst to viremia of the dam, facilitating vector transmission. To prevent venereal SBV transmission, sensitive PCR testing of semen batches from SBV-infected bulls is the method of choice (1,10).

We thank Patrick Zitzow and Susanne Zahnow for excellent technical assistance and the staff of the Biosafety Level 3 facility at Friedrich-Loeffler-Institut for their dedicated animal care.

The animal experiments were approved by an independent ethical committee (LALLF 7221.3-1.1-004/12 and LALLF M-V TSD/7221.3-2.5-005/12). This study was supported by the German Federal Ministry of Food, Agriculture and Consumer Protection and the European Union, as outlined in Council Decision 2012/349/EU concerning a financial contribution by the Union for studies of Schmallenberg virus.

Page created: January 08, 2014
Page updated: January 08, 2014
Page reviewed: January 08, 2014
The conclusions, findings, and opinions expressed by authors contributing to this journal do not necessarily reflect the official position of the U.S. Department of Health and Human Services, the Public Health Service, the Centers for Disease Control and Prevention, or the authors' affiliated institutions. Use of trade names is for identification only and does not imply endorsement by any of the groups named above.