An urban epidemic of dengue in Senegal during 2009 affected 196 persons and included 5 cases of dengue hemorrhagic fever and 1 fatal case of dengue shock syndrome. Dengue virus serotype 3 was identified from all patients, and Aedes aegypti mosquitoes were identified as the primary vector of the virus.

Dengue is an arboviral disease transmitted by Aedes spp. mosquitoes and caused by 4 serotypes of dengue virus (DENV): DENV-1, DENV-2, DENV-3, and DENV-4. DENV belongs to the family Flaviviridae, genus Flavivirus (1). More than 2.5 billion persons worldwide are considered at risk for dengue (2); the number of dengue infections per year has been estimated at 390 million, although only 96 million are symptomatic (3).

Figure 1. . . Geographic distribution of patients with confirmed dengue in the region of Dakar, Senegal. Number of patients is shown in parentheses. Inset shows location of Dakar in Senegal and in...

Most dengue infections occur in urban areas in tropical and subtropical regions, but imported cases have been reported in nontropical regions. During October 2009, imported DENV-3 infections were diagnosed in Turin, Italy (4), and Marseille, France (5), from patients returning from the Louga and Thies regions in Senegal (Figure 1). DENV-specific IgM and/or RNA were also detected in 5 persons living in Dakar, Senegal, who were suspected to have dengue. We report results from investigation of the 2009 dengue epidemic in Senegal.

In conjunction with human testing, mosquito sampling was performed during December 2009 in households with confirmed dengue cases, and entomologic risk indexes (i.e., Breteau and container indices [6]) were evaluated. DENV isolation and identification was performed on homogenized mosquitoes and human serum samples injected into mosquito cell lines, as described (7).

The fatal case was in a 71-year-old Lebanese woman hospitalized in a private clinic in Dakar on October 30 with a 4-day history of fever; she had severe thrombocytopenia and elevated transaminase levels. Despite treatment (voluven and adrenaline), she died of cardiac arrest. Disseminated intravascular coagulation was probably responsible for the hemorrhagic syndrome.

Of the 5 other patients (4 Lebanese and 1 Senegalese) who had hemorrhagic manifestations, all had fever, epistaxis, and melena (5/5) associated with thrombocytopenia (platelet count 50–90 × 109/L) and leukopenia (leukocyte count 2.5–3.5 × 109 cells/L); 4 reported headache, and 3 reported myalgia/arthralgia. All 5 patients were hospitalized and received transfusions of fresh frozen plasma, platelet concentrates, and other supportive treatments. Dengue-specific IgM and/or RNA were detected in serum samples collected 2 or 8 days after the onset of symptoms. All patients recovered and were discharged from the hospital after 8 or 10 days. 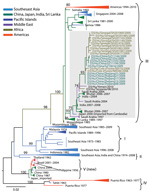 Figure 2. . . Maximum-likelihood phylogenetic tree of dengue virus serotype 3 (D3) sequences from Senegal compared with other sequences. The tree was constructed on the basis of an 885-bp segment of the...

Using mosquito continuous cell lines, we recovered 49 DENV-3 isolates from confirmed case-patients. Phylogenetic analysis of sequences from mosquito and human samples revealed that DENV-3 genotype III closely related to isolates circulating in Côte d’Ivoire (2008) and China (2009) was circulating during the Senegal outbreak (Figure 2). Dates of illness onset of confirmed cases indicated that the outbreak started in late September 2009, peaked in mid-November, and declined in mid-December.

The entomologic investigation found high epidemic risk in all localities infested with DENV vectors. The Breteau index ranged from 6.6 to 195.2 in Dakar, 1.6 to 32.7 in Louga, and 1.1 to 14.9 in Thies, whereas the container indices ranged from 15 to 63.2 in Dakar, 5.3 to 15.2 in Thies, and 14.3 to 64.2 in Louga. A total of 5,730 mosquitoes were collected; these belonged to 8 species: Aedes aegypti, Anopheles gambiae, Culex quinquefasciatus, Cx. tigripes, Cx. tritaeniorhynchus, Cx. antennatus, Cx. ethiopicus, and Cx. nebulosus. Most mosquitoes were collected as adults, but 1,675 emerged from larvae that were collected in the field. Cx quinquefasciatus mosquitoes predominated, but Ae. aegypti mosquitoes, the only dengue vector collected, were found in all sites. DENV-3 was detected from 3 pools of mosquitoes collected in 2 neighborhoods of Dakar: Plateau (2 pools) and Parcelles Assainies (1 pool).

An epidemic of DENV-3 occurred in Senegal during September–December 2009; of the 196 laboratory-confirmed cases, most (193) occurred in Dakar. This finding could indicate that transmission rates were higher in this urban area but may have been the result of bias in sample collection; dengue surveillance was less active at health facilities in in other regions, which provided only 277 (39%) of the 696 samples collected from persons who were suspected to have dengue. Fever, headache, myalgia, vomiting, thrombocytopenia, and leukopenia were the most frequent signs and symptoms among patients with confirmed dengue, as described (9).

The proportion of DHF cases in this outbreak seemed to be high at 3% when compared with previous reports in the Americas from the 1980s through 2007, in which DHF rates ranged from 1.3% to 2.4% (10). However, our sample size was limited and lacks confirmatory power.

Ae. aegypti mosquitoes were the most likely vector of DENV-3 transmission during this epidemic, given their association with DENV and the overlap of their distribution and abundance with the locations of dengue confirmed cases. Ae. aegypti mosquitoes are known to be a competent vector for DENV in West Africa (11) and could maintain DENV-3 through vertical transmission in Senegal, as described (12). The absence of suspected or confirmed dengue cases in Louga, despite the high density of Ae. aegypti mosquitoes, suggests that the first reported case-patient contracted the DENV infection elsewhere, possibly in Dakar, which he had visited several times.

The phylogenetic analysis of DENV-3 strains isolated during the outbreak suggests that they belong to genotype III and are closely related to DENV-3 isolated from Côte d’Ivoire and China in 2008 and 2009, respectively (13). Hence, the strain responsible for this outbreak may have been introduced into Senegal by travelers from Asia or from Côte d’Ivoire.

Dr Ousmane Faye is a virologist and specialist in acarology who works at the Arbovirus and Viral Haemorrhagic Fever Unit, Institut Pasteur de Dakar, Senegal. His primary research interests include the vectorial transmission of arboviruses and viruses causing hemorrhagic fevers.

We thank Magueye Ndiaye, Modou Diagne, Carlos Fortez, Moussa Dia, and Oumar Ndiaye for excellent technical assistance with laboratory diagnosis and field investigations. We also thank the authorities and the field agents of the Ministry of Health of Senegal for facilitating the investigation of this outbreak.

This work was supported by grants from the Institut Pasteur de Dakar, Senegal; the Ministry of Health of Senegal; and the US National Institutes of Health (grant AI069145).

Page created: January 24, 2014
Page updated: January 24, 2014
Page reviewed: January 24, 2014
The conclusions, findings, and opinions expressed by authors contributing to this journal do not necessarily reflect the official position of the U.S. Department of Health and Human Services, the Public Health Service, the Centers for Disease Control and Prevention, or the authors' affiliated institutions. Use of trade names is for identification only and does not imply endorsement by any of the groups named above.