We used molecular methods to identify Rickettsia raoultii infections in 2 persons in China. These persons had localized rashes around sites of tick bites. R. raoultii DNA was detected in 4% of Dermacentor silvarum ticks collected in the same area of China and in 1 feeding tick detached from 1 patient.

Rickettsia raoultii was first detected in Rhipicephalus pumilio and Dermacentor nuttalli ticks from the former Soviet Union in 1999 and initially named RpA4, DnS14, and DnS28 (1). In 2008, it was identified as a novel Rickettsia species on the basis of its genetic and serologic characteristics (2). Since its emergence, R. raoultii has been found to be associated with Dermacentor ticks throughout Europe (3) and in some parts of Asia, including Mongolia (4) and China (5,6).

A D. marginatus tick detached from a patient in France with tick-borne lymphadenopathy/Dermacentor tick–borne necrosis erythema and lymphadenopathy was positive for R. raoultii, suggesting its pathogenicity for humans (2). Seven additional R. raoultii–infected cases were later diagnosed in France (7). We report 2 cases of R. raoultii infection in northeastern China.

On May 15, 2012, a 67-year-old man came to Mudanjiang Forestry Central Hospital in Mudanjiang, China, with an attached tick on his left shoulder. The feeding tick was detached in the outpatient department and subsequently identified as D. silvarum by an entomologist. Four days later, a painful erythematous rash developed around the site of the tick bite, and the patient returned to the hospital for treatment. The rash was irregular, round, and ≈1.5 cm in diameter. No other symptoms and signs were found.

On May 21, 2012, a 30-year-old man came to the same hospital with asthenia, anorexia, nausea, and a painful rash on his abdomen. He had been bitten by a tick 4 days before onset of symptoms. Physical examination identified a 20 × 5 cm erythematous rash on his abdomen around a tick-bite eschar. Vesicles were seen surrounding the site of the tick bite. Lymphadenopathy was not observed.

Routine laboratory and hematologic assays for blood and serum samples from both patients showed standard results. Because rashes were found during physical examinations and infection with spotted fever group rickettsia was suspected, oral doxycycline (100 mg, twice a day for 2 weeks) was then prescribed. The infections of the 2 patients were successfully treated at home and did not recur. 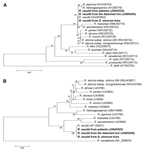 DNA was extracted from anticoagulated blood samples by using a Blood DNA Extraction Kit (QIAGEN, Germantown, MD, USA) according to the manufacturer’s instructions. PCRs specific for the conserved citrate synthase gene (gltA) and spotted fever group–restricted outer membrane protein A gene (ompA) were conducted as described (8) and followed by sequencing. Both partial gltA (341 bp) and ompA (325 bp) sequences from the 2 patients were identical to each other and to those of R. raoultii (Figure).

PCR results for other tick-borne pathogens, including Anaplasma phagocytophilum, Ehrlichia chaffeensis, Babesia spp., Francisella tularensis, and Borrelia burgorferi sensu lato, were negative. Serum specimens were tested by indirect immunofluorescence assay for IgM and IgG against R. heilongjiangensis, which was a known Rickettsia species circulating in the study area (9). IgM titers of 64 and 128, respectively, were observed in serum samples obtained 3 days after disease onset from both patients. The IgG titer was 64 for both patients.

A feeding D. silvarum tick detached from the first patient was positive for rickettsial gltA and ompA by PCR. Sequences were identical to those amplified from the 2 patients (Figure). We used primers CS2d-CSend and Rr190.70-Rr190.602 to amplify longer fragments of gltA (1,150 bp) and ompA (530 bp), respectively (8). Analyses showed that these sequences were identical to corresponding sequences of R. raoultii identified in a tick detached from a French patient (2).

To identify local natural foci, host-seeking ticks were collected by dragging a fabric flag over vegetation in the area where the 2 patients lived. An entomologist identified all ticks by morphologic features to the species level and developmental stage. DNA was extracted from ticks by using a Tissue DNA Extract Kit (Tiangen Biotechnique Inc., Beijing, China) following the manufacturer’s instructions. PCR was performed to amplify rickettsial gltA and ompA fragments, and sequencing was performed (8). R. raoultii was identified in 3 (4%) of 75 adult D. silvarum ticks and 0 of 453 Ixodes persulcatus ticks tested (Figure).

Eight cases of human infection with R. raoultii have been reported in France. All patients had tick-borne lymphadenopathy/Dermacentor tick–borne necrosis erythema and lymphadenopathy, which was defined as the association of a tick bite, an inoculation eschar on the scalp, and cervical lymphadenopathies (10).

Isolation in cell cultures is the ultimate diagnostic method for rickettsial infections, but it is available only in biosafety level 3 laboratories (9). However, serologic tests are useful tools, and indirect immunofluorescence assay is considered the reference method. PCR, followed by sequencing is mainly used to detect and identify Rickettsia species and is also an effective diagnostic method (9,12).

Of the 8 cases of human infection with R. raoultii in France, 4 were identified by PCR amplification from ticks detached from patients, and 4 were identified by rickettsial-specific serologic assays (2,7). In contrast, we identified 2 cases of human infection with R. raoultii in China by molecular detection and sequence determination of the pathogen in blood samples and from a tick detached from 1 of the patients. Although only acute-phase (3 days after disease onset) serum samples were available, the presence of IgM and IgG against R. heilongjiangensis supported the diagnoses (12).

R. raoultii has been detected in Dermacentor spp. ticks, such as D. silvarum, D. nuttalli, D. reticulatus, and D. marginatus (1,2), and infection rates in Europe range from 2% to 80% (13). R. raoultii was also found in 4% of D. silvarum ticks collected in the same area of China. We previously identified a novel rickettsial agent identical to DnS14 from D. silvarum ticks, which was later named R. raoultii, in Jilin Province neighboring this study site (6). D. silvarum ticks are distributed over a wide area in northeastern China, parasitize many domestic and wild animals, and readily feed on humans as alternate hosts. Extended investigation and tick surveillance are required to understand the distribution of R. raoultii in this region.

The current recommended therapeutic regimen for rickettsiosis is administration of tetracyclines; doxycycline is the preferred agent because of its dosage (twice a day) and better patient tolerance. The 2 patients received doxycycline treatment at home and had uneventful recoveries. These findings indicate that doxycycline should be administrated as soon as possible to patients who have been exposed to ticks and have clinical manifestations suggestive of rickettsiosis.

Dr Jia is a scientist at the Beijing Institute of Microbiology and Epidemiology, Beijing, China. Her research interest is tick-borne diseases.

We thank Yu-Dong Song, Nan-Nan Yao, and doctors and nurses in the Department of Tick-borne Infectious Disease in Mudanjiang Forestry Central Hospital for help with sample collection, and Bo-Hai Wen and Xi-Le Wang for technical support with serologic testing.