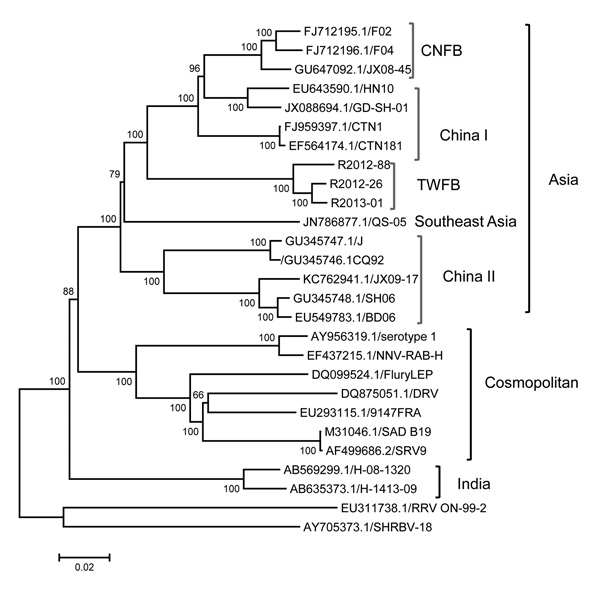 Figure 2. Phylogenetic relationships of 27 rabies virus (RABV) genomes constructed by maximum-likelihood methodNumbers close to the nodes were from 1,000 bootstrap replicationsThe tree was rooted with RABV from bats and raccoonsThree major groups, Asia, Cosmopolitan, and India, are strongly supported, as indicated (17)There are 4 major lineages within the group from Asia, including previously recognized China I, China II (16), Southeast Asia, and RABV from Taiwan ferret badgers (TWFB)RABVs derived from Chinese ferret badgers (CNFB) are clustered with China I, indicating that RABVs of TWFB and CNFB are of independent originScale bar indicates nucleotide substitutions per site.

1Joint senior authors who contributed equally to this article.

Page created: April 16, 2014
Page updated: April 16, 2014
Page reviewed: April 16, 2014
The conclusions, findings, and opinions expressed by authors contributing to this journal do not necessarily reflect the official position of the U.S. Department of Health and Human Services, the Public Health Service, the Centers for Disease Control and Prevention, or the authors' affiliated institutions. Use of trade names is for identification only and does not imply endorsement by any of the groups named above.