To the Editor: The genus Henipavirus (family Paramyxoviridae) contains 3 established species (Hendra virus, Nipah virus, and Cedar virus) and 19 newly identified species, including 1full-length sequenced virus, Bat Paramyxovirus Eidhel/GH-M74a/GHA/2009 (1,2). The zoonotic pathogens Hendra virus and Nipah virus have been associated with lethal neurologic and respiratory diseases in humans, horses, and pigs (3–5). The known natural reservoirs of henipaviruses are fruit bats (1,3); these viruses have not been reported in other wild animals. We report on a novel henipa-like virus, Mojiang paramyxovirus (MojV), in rats (Rattus flavipectus) in China.

All samples were processed by using a virus particle–protected nucleic acid purification method, followed by sequence-independent PCR amplification of extracted RNA and DNA (6). The amplified viral nucleic acid libraries were then sequenced by using an Illumina Genome Analyzer II (Illumina Trading, Beijing, China) for a single read of 81 bp. All raw reads were then aligned to the nonredundant protein database of the National Center for Biotechnology Information (www.ncbi.nlm.nih.gov/RefSeq/) by using BLASTx (http://blast.ncbi.nlm.nih.gov/Blast.cgi) after filtering reads as described (6). The taxonomy of the aligned reads was parsed by using the MEGAN4 MetaGenome Analyzer (7).

On the basis of the nonredundant protein alignment results, we identified 38 sequence reads that were classified as Henipavirus spp. However, the sequences shared low nucleotide and amino acid identities with known henipaviruses. The reads were then used for reads-based PCR to identify the partial genome of this virus. The remaining genomic sequences were determined by using genome walking. The 5′ and 3′ untranslated regions were obtained by nested PCR with combined specific primers and henipavirus-specific degenerate primers as described (8), and the exact sequences of the 5′ and 3′ genome termini were determined by rapid amplification of cDNA ends. 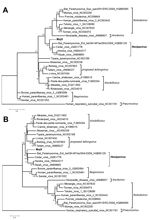 Figure. Phylogenetic trees based on the nucleocapsid proteins (A) and large proteins (B) of Mojiang paramyxovirus (MojV) and other previously reported paramyxovirusesBold font indicates MojV and Henipavirus sppScale bars indicate nucleotide substitutions...

The nucleotide identities of predicted MojV genes exhibited similarity with genes of known henipaviruses: N (53.0%–57.0% identity), phosphoprotein (37.8%–43.0% identity), matrix (59.5%–63.4% identity), fusion (47.5%–51.4% identity), attachment glycoprotein (36.6%–41.8% identity), and L (55.9%–58.6% identity) genes. Using MEGA5 (10), we used the phylogenetic trees based on N and L proteins to describe the evolutionary relationships between MojV and members of the family Paramyxoviridae (Figure). MojV clustered with the 4 members of the genus Henipavirus and was distant from other clusters. Thus, considering the similar genome features between MojV and other henipaviruses, we confirmed that MojV could be classified as a new species closely related to Henipavirus spp.

Our study showed the presence of a rodent-origin, henipa-like virus, MojV, in China. R. flavipectus rats are the natural reservoir of MojV. This finding and its context indicate that Henipavirus spp. viruses might infect more mammalian hosts than previously thought and that bats may not be the only hosts of henipaviruses.

This work was supported by a National S&T Major Project (China Mega-Project for Infectious Disease; grant no. 2011ZX10004-001) from the People’s Republic of China, and by a Basic Research and Operating Expenses grant (no. 2013IPB301) from the Institute of Pathogen Biology, Chinese Academy of Medical Sciences and Peking Union Medical College.