To do this, we assessed the B. miyamotoi infection rate of ticks that had bitten humans. Earlier studies included ticks collected through flagging an area (1,2); our study provides specific information about the infection rate of ticks feeding on humans. The ticks were collected from persons who reported their tick bites on the website http://www.tekenradar.nl. After removal of the ticks from the skin, the ticks were submitted to the National Institute of Public Health and the Environment. For 1,040 ticks gathered during April–June 2012, we determined tick species, stage of development, and gender by microscopic examination.

We defined the degree of engorgement in 4 categories from unengorged (score 0) to fully engorged (score 3), as visually determined. To isolate DNA, we boiled the ticks with engorgement scores of 0­–1 in ammonium hydroxide (6); for ticks with engorgement scores of 2–3, we used the QIAGEN (Valencia, CA . USA) blood and tissue DNA-extraction kit (7). We used a B. miyamotoi–specific real-time PCR based on the flagellin gene for detection of the bacteria (5). Quantitative PCR-positive tick lysates were tested with a conventional PCR, which amplifies a fragment of glycerophosphodiester phosphodiesterase (glpQ) gene, to confirm the outcome (5). These PCR products were sequenced and were identical to B. miyamotoi sequences filed in GenBank (AB824855). We determined the presence of B. burgdorferi DNA with a duplex quantitative PCR using fragments of the outer membrane protein A gene and the flagellin B gene as targets (7).

All 1,040 ticks were identified as Ixodes ricinus, the most common tick that transmits B. burgdorferi in northern Europe (8). We detected B. miyamotoi DNA in 37 ticks (3.6%) using real-time PCR targeting the flagellin gene, which was confirmed for 32 ticks (3.1%) in the conventional PCR targeting the glpQ gene. (Technical Appendix Table). In 9 of the 37 ticks positive for B. miyamotoi, B. burgdorferi was also detected. Similar to B. burgdorferi, the risk of transmission of B. miyamotoi is likely to become higher if ticks become engorged with blood; 23 of the 37 (62.2%) B. miyamotoi–infected ticks were somewhat engorged (score 1–3) and thus had such an increased risk for transmission. All glpQ sequences of the detected B. miyamotoi isolates were identical to the sequence detected in the sample from the patient reported in the Netherlands this year by Hovius et al. (5). B. burgdorferi DNA was detected in 190 ticks (18.3%) compared with 11.8% detected in a study that included ticks collected through flagging (9). 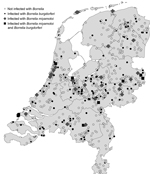 Figure. Locations of ticks collected through the website http://www.tekenradar.nl in the Netherlands during summer 2012,Ticks included in the study were submitted from all parts of the country; ticks positive for Borrelia...

Figure shows that ticks included in the study were submitted from all parts of the country; B. miyamotoi– and B. burgdorferi–positive ticks were found in almost every region. Of the ≈1 million tick bites per year in the Netherlands (10), an estimated 36,000 were by ticks that were infected with B. miyamotoi, and 183,000 were by ticks infected with B. burgdorferi. This substantial human exposure to B. miyamotoi and the reported cases in Russia, the United States, and, recently, the Netherlands (3–5) raises the question to what extent exposure to B. miyamotoi leads to human disease in the general population? These results call for the development of sensitive and specific serologic and molecular tests for B. miyamotoi to identify possible patients, which will lead to a better understanding of the clinical spectrum of B. miyamotoi–induced disease.

This study was financed by the Ministry of Health, Welfare and Sport, the Netherlands.

Page created: June 18, 2014
Page updated: June 18, 2014
Page reviewed: June 18, 2014
The conclusions, findings, and opinions expressed by authors contributing to this journal do not necessarily reflect the official position of the U.S. Department of Health and Human Services, the Public Health Service, the Centers for Disease Control and Prevention, or the authors' affiliated institutions. Use of trade names is for identification only and does not imply endorsement by any of the groups named above.