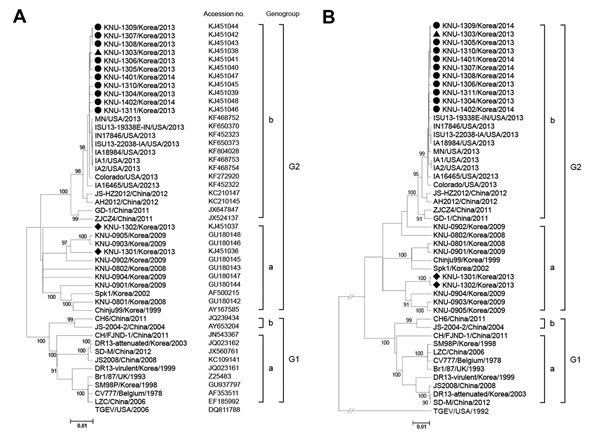 Figure 1. Phylogenetic analyses based on the nucleotide sequences of the spike gene (A) and S1 portion (B) of porcine epidemic diarrhea virus (PEDV) strainsA putative similar region of the spike protein of transmissible gastroenteritis virus (TGEV) was included as an outgroup in this studyMultiple-sequencing alignments were performed by using ClustalX (http://www.clustal.org/), and the phylogenetic tree was constructed from the aligned nucleotide sequences by using the neighbor-joining methodNumbers at each branch represent bootstrap values >50% of 1,000 replicatesNames of the strains, countries and years of isolation, GenBank accession numbers, and genogroups and subgroups proposed in this study are shownSolid circles indicate the strains from South Korea from this study that are similar to US PEDV strains; solid triangle indicates the early 2013 strain that is similar to the US PEDV strains; solid diamonds indicate the early 2013 strains that are similar to the previous PEDV strains from South KoreaScale bars indicate nucleotide substitutions per site.