During the 2013–14 influenza season, we assessed characteristics of 102 adults with suspected influenza pneumonia in a hospital in Mexico; most were unvaccinated. More comorbidities and severity of illness were found than for patients admitted during the 2009–10 influenza pandemic. Vaccination policies should focus on risk factors.

Beginning December 5, 2013, admissions of adults with acute respiratory infections increased at Hospital Central “Dr Ignacio Morones Prieto” (Hospital Central), in San Luis Potosí, Mexico; 102 persons were admitted with suspected influenza pneumonia. A high proportion of patients required mechanical ventilation (MV) and intensive care. The number of acute respiratory infection–associated admissions of young children and older adults did not increase. This pattern, occurring nearly 5 years after the initial influenza A(H1N1)pdm09 outbreak, resembles that of the initial outbreak in San Luis Potosí in April 2009 (6). This raises questions regarding possible changes in the viral strain or the presence of large numbers of susceptible persons not exposed to, or vaccinated against, this virus. We analyzed characteristics of 102 patients with confirmed or suspected influenza pneumonia admitted during a 2-month period and compared them with those of 100 patients with confirmed A(H1N1)pdm09 infection hospitalized during the 2009–10 pandemic.

During December 5, 2013–February 7, 2014, 102 patients, 17–79 years of age, were admitted to Hospital Central with acute onset of cough or rhinorrhea plus dyspnea, fever, and radiographic evidence of pneumonia and were considered to have possible influenza pneumonia. We compared data for the 2013–14 cohort with data from patients 15–71 years of age with confirmed influenza A(H1N1)pdm09 infection admitted to Hospital Central during the 2009–10 pandemic (7). Patients were evaluated according to a clinical questionnaire (6,7); blood samples (laboratory tests and cultures), sputum samples or tracheal aspirates (Gram stain and culture), and chest radiographs were also evaluated. Nasopharyngeal or tracheal samples were analyzed to detect influenza virus by using real-time reverse transcription PCR (Laboratorio Estatal de Salud Pública, Servicios de Salud del Estado de San Luis Potosí) or sequence-specific primer PCR (Universidad Autónoma de San Luis Potosí) with previously reported primers (8). Empiric treatment (ceftriaxone and clarithromycin or ceftriaxone and levofloxacin) was administered, and a course of oseltamivir was started within 6 hours after admission at doses of 75–150 mg 2× daily.

Influenza A(H1N1)pdm09 virus was detected in 47 patients and influenza A (not subtyped) in 8 patients; samples were not submitted for virologic testing for 8 patients. In 28 (71.8%) of 39 patients with negative results by real-time and sequence-specific primer reverse transcription PCR, samples were collected >5 days after onset of symptoms or patients had received oseltamivir during >1 day at the time of sample collection; therefore, test results for those patients were not conclusive, and the patients were included in the cohort. Signs and symptoms of the remaining 11 patients with negative results and of the 8 untested patients were suggestive of influenza infection; therefore, they were included in the cohort.

Mean age of the 102 patients was 44.6 years; 52 (51%) were female, and 82 (80.4%) had risk factors for complications. The most common concurrent health conditions were obesity (63[62%]) and diabetes mellitus (23 [23%]). Eight (8%) patients had been vaccinated for 2013–14 seasonal influenza. Radiologic manifestations were bilateral ground glass opacities and consolidations. Most patients had severe illness; mean partial pressure arterial oxygen and fraction of inspired oxygen ratio on admission was 175.6 (reference value 400; SD 74.4); 52 (50.9%) patients required MV. 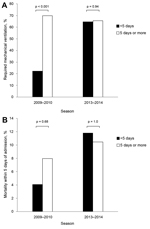 Figure 2. A) Proportion of patients with confirmed influenza pneumonia that required mechanical ventilation according to the duration of symptoms on admission (0–4 days versus >5 days) during the 2009–10 pandemic and 2013–14...

In Mexico, the first 3 influenza A(H1N1)pdm09 waves were characterized by a high proportion of hospitalizations among persons 5–59 years of age (1,9); in the fourth wave, the proportion of hospitalizations increased in young children and older adults (2). The 2013–14 influenza season data resemble those of the initial A(H1N1)pdm09 outbreak in the high number of severe cases among adults <80 years and, although this observation has been described in other pandemics (10), possible explanations for this epidemiologic pattern should be analyzed. The following characteristics of the 2013–14 influenza season cohort could explain this demographic situation: 1) low vaccination coverage of high-risk populations; 2) differences in the size of the high-risk susceptible population; 3) high prevalence of diabetes mellitus and obesity; 4) antigenic drift; and 5) unusually low environmental temperatures during the 2013–14 winter season. The severity of pneumonia cases among adults <80 years of age during the 2013–14 influenza season, characterized by MV requirement, low lymphocyte counts, and high C-reactive protein and lactate dehydrogenase concentrations, could be explained by a high prevalence of concurrent health conditions (especially obesity), delay in health care access, or a change in virulence of the current influenza strain.

Because of the high number of unvaccinated patients in this study cohort, the need to modify the intended population for influenza vaccination policies should be assessed. The vaccination rate was substantially lower among patients who required MV compared with those who did not; the overall vaccination rate among hospitalized patients contrasts with the high vaccination rates reported recently in Mexico for high-risk groups (71.7%–101.9%) (11,12). The association between severe influenza infection and obesity has been increasingly documented since the 2009 pandemic (13). Therefore, this group should be included among persons at high risk for influenza complications and the BMI range of subjects that require vaccination should include not only those with morbid obesity, but also those weighing >30 kg/m2.

To improve outcomes, additional measures could be implemented such as campaigns and educational programs for the public and physicians that advocate early diagnosis, treatment, and identification of influenza-associated complications. In summary, to establish appropriate preventive measures, the epidemiologic characteristics of influenza outbreaks should be used to identify risk factors for severe infections.

Dr Gómez-Gómez is a pulmonologist at Hospital Central “Dr Ignacio Morones Prieto” in San Luis Potosí. His research interests include respiratory infections with a focus on influenza and tuberculosis.