Urethritis Caused by Novel Neisseria meningitidis Serogroup W in Man Who Has Sex with Men, Japan

To the Editor: We report a case of urethritis caused by a novel multilocus sequence type (ST), 10651, of the ST11/electrophoretic type (ET)–37 complex Neisseria meningitidis serotype W. The patient was a man who has sex with men. We also report on the patient’s male partner, who was colonized with the same bacteria.

In March 2013, a 33-year-old Japanese man sought medical care at Shirakaba Clinic (Tokyo) after experiencing a urethral discharge for 4 days. The man was HIV positive (CD4 count 649 cells/μL) but was not receiving antiretroviral therapy. Physical examination showed a mucous urethral discharge. Gram staining of a sample revealed many gram-negative diplococci phagocytosed by polymorphonuclear leukocytes. Eleven days before seeking care, the patient had oral and anal intercourse with his male partner. A diagnosis of suspected urethritis caused by Neisseria gonorrhoeae was made, and a sample of the urethral discharge was sent for culture and testing (Strand Displacement Amplification) for N. gonorrhoeae and Chlamydia trachomatis. The patient was intravenously administered a single dose of ceftriaxone (1 g) (intramuscular administration of ceftriaxone is not approved in Japan). He was also given a single dose of azithromycin (1g orally) for possible C. trachomatis urethritis (1).

The 33-year-old male partner of the case-patient was originally from the United States and had been living in Japan for 4 years. Because of his history of sexual contact with the case-patient, he was advised to undergo a screening test for HIV and N. meningitidis. The man underwent a physical examination at our clinic 40 days after the case-patient received treatment; findings were unremarkable, and the result for HIV testing done 2 days earlier was negative. Throat and urine samples were obtained for culture, and the man was intravenously administered ceftriaxone (1 g). The urine sample culture was negative, but the throat sample culture was positive for N. meningitidis. The throat culture result was negative 10 days after the patient’s treatment. 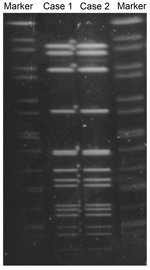 Figure. Pulsed-field gel electrophoresis (PFGE) patterns for N. meningitidis strains isolated from a man with urethritis (case 1) and his male sex partner (case 2), Japan. PFGE was performed with the restriction...

We performed cultures and tests to identify N. meningitidis, and we conducted multilocus sequence typing (MLST), serotyping, PorA typing, and pulsed-field gel electrophoresis (PFGE) as described elsewhere (2). Isolates from both men were identified as serotype W and PorA type P1.5, 2. MLST showed that the strains were ST10651 (genes analyzed: aroE:3, adk:4, fumC:3, gdh:8, pdhC:4, pgm:6, and abcZ:662). Although abcZ:662 was a novel allele, ST10651 belongs to the ST11/ET37 complex (3). We used PFGE with restriction enzyme NheI to compare the N. meningitidis strains from the case-patient and his partner; the isolates had the same PFGE pattern (Figure). Both isolates were confirmed to be a novel multilocus ST, 10651, of the ST11/ET37 complex; however, novel MLST types frequently occur. By using the E-test (Sysmex bioMérieux, Tokyo, Japan), we determined that the 2 isolates required the same minimum inhibitory concentrations (MICs) for the following antimicrobial drugs: penicillin (MIC 0.125 mg/L), ceftriaxone (MIC 0.004 mg/L), ciprofloxacin (MIC 0.004 mg/L), and azithromycin (MIC 0.25 mg/L) (4).

Chemoprophylaxis is indicated for persons who have close contact with someone with invasive meningococcal infection (9), but there is uncertainty regarding the treatment of asymptomatic persons who have contact with someone with N. meningitidis urethritis. To avoid a reinfection cycle between the men in this study, we treated the asymptomatic, N. meningitidis–colonized male partner.

Since the early 2000s, and especially since 2012, outbreaks of invasive serogroup C, ST11/ET37 complex meningococcal disease causing high rates of death have been reported among MSM in the United States and Europe (10). These outbreaks have raised policy questions concerning vaccination recommendations for HIV-infected persons and for the MSM population (10). In Japan, meningococcal vaccination has not been officially approved, and neither of the men in this study had been vaccinated against N. meningitidis.