Genetic Diversity of Enterovirus A71, India

We have identified circulation of 3 genogroups of enterovirus (EV) A71 in India. A new genogroup (proposed designation G) was discovered during this study. We isolated genogroups D and G in wide geographic areas but detected subgenogroup C1 only in 1 focus in western India. A systematic nationwide search for EV-A71 is warranted.

Enterovirus A71 (EV-A71; enterovirus species A, genus Enterovirus, family Picornaviridae) was first isolated in 1969 from the cerebrospinal fluid of a patient with encephalitis in California, USA. EV-A71 is known to cause encephalitis; meningitis; hand, foot and mouth disease (HFMD); and acute flaccid paralysis (AFP) (1,2). EV-A71 epidemic activity has increased substantially throughout the World Health Organization South-East Asia and Western Pacific Regions since the 1997 outbreak of HFMD with severe neurologic complications and high case-fatality rates reported in Sarawak and peninsular Malaysia (3). In many countries, EV-A71 circulated for several years before large-scale outbreaks were reported (4). In China, several hundred thousand cases of HFMD have been reported in recent years (5). In India, the epidemiology of EV-A71 has remained largely unexplored. A small outbreak of HFMD in Kerala in 2003 and 36 (42%) of 87 encephalitis cases reported in western Uttar Pradesh during July 2004–November 2006 were attributed to EV-A71 infections only on the basis of serologic evidence (6,7). Isolation of EV-A71 from a patient with AFP in India was reported for the first time in 2001 (8). Recently, 2 research groups have reported frequent isolation of EV-A71 from persons with AFP in Uttar Pradesh, Karnataka, and Kerala (9,10).

EV-A71 strains isolated worldwide are classified into 4 genogroups: A–D (11). Genogroups B and C have been differentiated into subgenogroups B0–B5 and C1–C5 (11). Bessaud et al. proposed 2 new genogroups in sub-Saharan Africa (genogroup E) and Madagascar (genogroup F) (12). Other new subgenogroups proposed recently include C4a, C4b, C6, C7, and B6 (9,13). We detected 14 EV-A71 among nonpolio enterovirus (NPEV) isolates from persons with AFP, HFMD, and encephalitis reported in Mumbai and surrounding areas during 2008–2012. The objective of this study was to evaluate the phylogenetic relationship of the Indian EV-A71 strains in the global context.

Median age of patients from whom the EV-A71 strains were isolated was 28 months; 10 (56%) were girls (Table 1). Three EV-A71–positive patients reported in Mumbai had lived in Uttar Pradesh. EV-A71–positive HFMD cases were non-neurologic, and the encephalitis patient recovered completely without neurologic deficit. Medical examination results 60 days after onset were not available for the AFP patients. 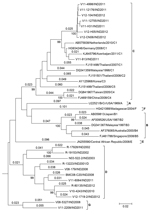 Nine isolates clustered with the strain R-13223-IND-01 (GenBank accession no. AY179600) (Figure 1), which was the only representative of EV-A71 genogroup D. A mean genetic distance of 11% and presence of multiple clusters within this genogroup indicated continuous evolution of genogroup D viruses over several years. Eight isolates (5 from AFP patients, 2 from HFMD patients, and 1 from an encephalitis patient) clustered with subgenogroup C1. Sequence similarity of >99% of 6 of the 8 isolates indicated a focal outbreak caused by C1 subgenogroup. Clustering of the subgenogroup C1 isolates with those from Germany, the Netherlands, and Azerbaijan suggested an epidemiologic link with the EV-A71 circulating in the European Region. V08–5327 and V11–2209 had sequence similarity of 89.5% between them and >18% divergence from all other known EV-A71 genogroups. We propose a new genogroup G designation for EV-A71 isolates V08–5327 and V11–2209. Table 2 shows estimates of evolutionary divergence of genogroup G in global context. 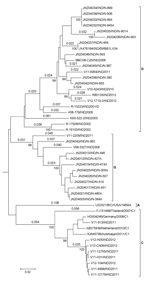 To study the genetic diversity among EV-A71 strains isolated in India, we extracted partial VP1 nucleotide sequences of various lengths from GenBank. We detected 50 EV-A71 strains among NPEV isolates from AFP patients in Uttar Pradesh, Kerala, and Karnataka during 2007–2009 (9). Four EV-A71 isolates were reported from AFP patients from Uttar Pradesh studied during 2009–2010 (10). We used 21 sequences of isolates from Rao (9) and 1 of Laxmivandana (10) for determining the genetic relationship of EV-A71 isolated in India. Neighbor-joining tree using partial VP1 (707 nt) sequences (Figure 2) showed that 11 EV-A71 strains assigned to genogroup F by Rao et al. actually clustered within isolates of genogroup D, and the remaining 10 EV-A71 strains clustered within the new genogroup G. None of the EV-A71 isolates of Rao et al. (9) clustered in the subgenogroup C1 (Technical Appendix).

Bessaud et al. very recently reported (12) that 20 partial sequences reported by Rao et al. did not cluster into any known subgenogroup, which suggests more genogroups in India. Our current study confirms that some of them cluster within genogroup G. The remaining sequences from the study of Rao et al. need further analysis on the basis of longer nucleotide sequences.

Our study reports the discovery of a new genogroup G of EV-A71 in India. Genogroups D and G may be endemic in India because they were isolated from AFP patients in wide geographic areas; however, these genogroups have not been implicated in any specific outbreaks. Moreover, the 2 genogroups appear to be indigenous to India because they have not been detected in any other country. EV-A71 strains of subgenogroup C1 were isolated only in 2011–2012, indicating very recent circulation. Subgenogroup C1 was associated with time- and space-clustered cases of AFP, HFMD, and encephalitis. Multiple genogroups and high sequence divergence within genogroups D and G showed that EV-A71 has been spreading across the country. Therefore, systematic efforts should be made to understand the impact of the virus on public health in India.

We thank Uma Nalavade for the NPEV used in this study. We also thank the 2 anonymous reviewers for suggestions that led to substantial improvement of the manuscript.

This study was supported by intramural funds from the Indian Council of Medical Research, New Delhi, India.

Genetic Diversity of Enterovirus A71, India