No Geographic Correlation between Lyme Disease and Death Due to 4 Neurodegenerative Disorders, United States, 2001–2010

Lyme disease is a complex, multisystem tickborne illness caused by the spirochete Borrelia burgdorferi (1). Each year in the United States, >30,000 cases are reported, but the actual number of infections may be 10-fold higher (1,2). Lyme disease cases are most commonly reported from the Northeast, mid-Atlantic, and upper Midwest regions of the United States (3). Central nervous system infection resulting in early neurologic Lyme disease, and more rarely late neurologic Lyme disease, is well documented (4,5). Because of the neurotropism of Lyme disease, speculative websites and articles and even peer-reviewed journals have purported causal associations between Lyme disease and several neurodegenerative disorders, including Alzheimer disease, amyotrophic lateral sclerosis (ALS), multiple sclerosis (MS), and Parkinson disease (6–11). Researchers have critically evaluated these proposed biologic associations between Lyme disease and Alzheimer disease, ALS, MS, and Parkinson disease, but none have found evidence of an association (12–21). We hypothesized that, if there is a link between B. burgdorferi infection and subsequent development of Alzheimer disease, ALS, MS, or Parkinson disease, the geographic distribution of these neurodegenerative disorders should correlate with that of Lyme disease. To determine if such a correlation exists, we compared the distribution of confirmed cases of Lyme disease in the United States with the distribution of deaths due to these 4 neurodegenerative disorders.

We used the Moran’s I test for spatial autocorrelation to assess geographic clustering of state incidence rates of Lyme disease and of death rates for the 4 neurologic disorders by using ArcGIS 10.1 (ESRI, Redlands, CA, USA). Geographic correlation between Lyme disease incidence and death rates for each of the other conditions was assessed by using the Spearman rank correlation (rs) to compare pairwise state rates. A subanalysis comparing pairwise state rates by sex was similarly performed. Rates for male patients who died of MS in Hawaii and the District of Columbia were not included in the analysis because of CDC WONDER data use restrictions. Analyses were conducted by using SAS version 9.3 (SAS Institute, Inc., Cary, NC, USA). Because this analysis used publicly available data, human subjects research approval was not sought. 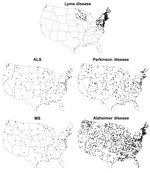 During 2001–2010, a total of 256,373 confirmed Lyme disease cases were reported in the United States. The median age of patients was 42 years; 137,377 (55%) patients were male. As expected, Lyme disease cases were concentrated in the Northeast, mid-Atlantic, and upper Midwest. Standardized state-specific Lyme disease incidence rates ranged from <1 case per 100,000 person-years for 34 states to 19–73 cases per 100,000 person years for 13 high-incidence states in the Northeast, mid-Atlantic, and upper Midwest (overall median incidence 0.4 cases/100,000 person-years) (Figure).

As for ALS and Parkinson disease, Lyme disease patients are more commonly male; MS and Alzheimer disease patients are more commonly female (3,22–25). It is conceivable that variations between states in sex distribution of the population could contribute to the lack of observed correlation between Lyme disease and the 4 neurodegenerative disorders. However, even when we examined sex-specific, age-adjusted rates by state, no correlation was identified between the geographic distribution of Lyme disease and any of the 4 neurodegenerative disorders. This finding suggests that differences in the distribution of the sexes by state did not affect the lack of correlation that we observed.

In conclusion, although associations between Lyme disease and Alzheimer disease, ALS, MS, and Parkinson disease have been proposed by writers of speculative websites and articles, supportive evidence for such an association is lacking. The absence of a positive correlation in the geographic distributions of these conditions provides further evidence against an association between Lyme disease and deaths from these 4 neurodegenerative conditions.

We thank Brad Biggerstaff for assistance with the statistical analysis.

Dr. Forrester completed this work while serving as an Epidemic Intelligence Service Officer in the Division of Vector-Borne Diseases, National Center for Emerging and Zoonotic Infectious Diseases, Centers for Disease Control and Prevention, Fort Collins, Colorado. He is currently a general surgery resident at Stanford University. His primary research interests include surgical infectious diseases, global public health, and vectorborne diseases.

No Geographic Correlation between Lyme Disease and Death Due to 4 Neurodegenerative Disorders, United States, 2001–2010