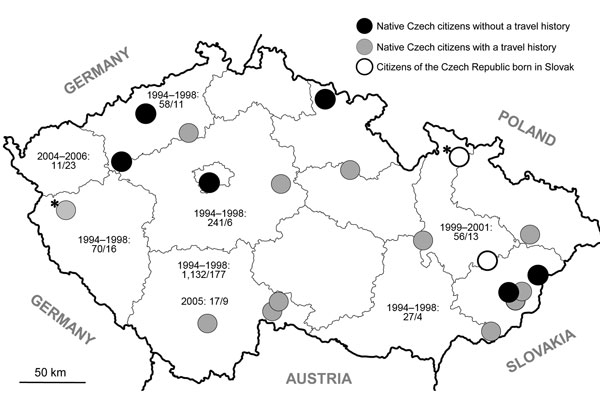 Figure. Distribution of human alveolar echinococcosis (AE) in the Czech Republic during 2007–2014, according to the site of residence of 20 case-patients, including their travel history. Asterisks (*) indicate AE cases already published (6,7). Six patients reported no travel outside the country; 2 patients were born in Slovakia and lived in the Czech Republic for 5 and 14 years before the time of initial AE diagnosis; the remaining patients traveled from the Czech Republic to various countries, including those to which AE is endemic. Nonperiodic examinations of red foxes (4,9) revealed the presence of Echinococcus multilocularis in the country. Date ranges indicate the period of examination; numbers separated by virgules indicate the number of foxes examined and those that tested positive, respectively.