Mycobacterium bovis infection of cats is exceedingly rare in regions where bovine tuberculosis is not endemic. We describe the diagnosis and clinical management of pulmonary M. bovis infection in 2 indoor-housed cats and their association with at least 1 M. bovis–infected human in Texas, USA, in September 2012.

Before implementation of bovine tuberculosis control programs and wide-scale pasteurization of milk, alimentary tract disease was the most common form of tuberculosis in cats (7); today, lymphadenopathy and cutaneous forms are more common (4). Diagnosis is based on clinical examination, imaging, biopsy with histopathologic examination, culture of aspirates or tissues, and specific immune-based blood assays (4,8,9). Intradermal skin tests are generally unreliable for diagnosing tuberculosis in cats (10). Client history is critical for determining the possibility for exposure of the cat to the pathogen, and zoonotic aspects should be considered (11). We describe the diagnosis and clinical management of pulmonary M. bovis infection in 2 indoor-housed cats and their association with at least 1 M. bovis–infected human in Texas, USA.

In September 2012, a 5-year-old female domestic cat (cat Y) was seen by a veterinarian for dyspnea, tachypnea, hyporexia, and lethargy. She lived indoors with 4 other cats and their female owner. The vague history provided by cat Y’s owner indicated that, ≈11 months earlier, her husband had died of tuberculosis only 6 weeks after diagnosis and initiation of directly observed antimycobacterial therapy. At the time the husband’s tuberculosis was diagnosed, the woman was Mantoux-test negative; ≈2 months after his death, she converted to skin-test positive but had normal findings on thoracic radiographs. She was subsequently treated with antimycobacterial drugs. The woman also reported that, in June 2012, another cat in the household was euthanized after clinical signs developed that were similar to those of cat Y; no necropsy was performed. Additional pertinent history included relocation of the deceased husband from Mexico to Texas 15 years earlier, frequent contact with recent immigrants from Central America and Mexico, and consumption of unpasteurized Mexican cheeses. 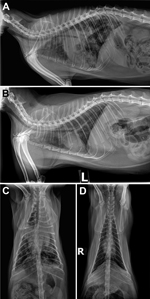 One month after cat Y was initially seen for care, all 5 cats in the household (cat Y, cats A–C, and cat G) were brought for screening thoracic radiographs and serology. Cats A–C and G exhibited no respiratory signs and appeared clinically healthy. Lung radiographs of cat G showed perihilar nodular changes and consolidation consistent with granulomas. The 5 cats were tested by 3 antibody-detection assays, MAPIA, TB STAT-PAK, and DPP VetTB (Chembio Diagnostic Systems, Inc., Medford, NY, USA), known to detect specific antibody in feline M. bovis or M. microti infection (8,12). Cats Y and G were seropositive by all 3 immunoassays upon initial testing; the other cats (cats A, B, and C) were seronegative (Figure 2). Serum from cats Y and G reacted with MPB70 and MPB83 antigens. Serum from cat G also reacted to ESAT-6 protein and its fusion with CFP10 (Figure 2, panel A). The feline antibody profiles were consistent with the known serologic immunodominance of these antigens in M. bovis infection reported for other host species (13). As with elephants (14), serum antibody levels in cats Y and G gradually declined after 1–3 months of antimycobacterial treatment (Figure 2, panel B). Cats A–C remained antibody negative in all 3 immunoassays during the same period (data not shown).

Given the clinical and serologic findings, the treating veterinarian contacted the appropriate public health authorities, and the owner was instructed to continue isolation of cats Y and G because of the clinical, serologic, and radiographic evidence suggestive of tuberculosis. Efforts to obtain her husband’s medical records to aid in the cats’ diagnosis had been refused until positive serologic test results for cats Y and G were produced (Figure 2), after which permissions from surviving family members were obtained. A local public health clinic, where the deceased husband had received diagnosis and treatment for pulmonary tuberculosis, provided results of sputum culture. These results showed that M. bovis had been isolated from his sputum; however, a previous investigation had not elucidated a definitive source of infection. After the cats’ veterinarian received this new information, bronchoalveolar lavages and gastric washes were performed on cats Y and G. AFB were detected in cat G’s gastric wash, and M. bovis was isolated by culture conducted at the National Veterinary Services Laboratories (Ames, IA, USA). No mycobacterial growth was obtained from cat Y, presumably because of the 7 weeks of antimycobacterial therapy before sampling. Antimycobacterial therapy (rifampin, marbofloxacin, and clarithromycin) was initiated for asymptomatic cat G. Whole-genome sequencing performed at the National Veterinary Services Laboratories revealed that the isolate from the husband and cat G were closely related but not identical; there were 8 single nucleotide polymorphisms (SNPs) between the 2 isolates (Table). As of April 8, 2014, all 5 cats and the owner remained clinically well.

Our findings highlight the possibility of M. bovis infection in an unlikely geographic locale (Houston, Texas) to which bovine tuberculosis is not endemic and an unlikely population (cats and humans living in the same household). The owners and their cats had no known contact with cattle or wildlife; however, the deceased husband had relocated to Texas from a country where bovine tuberculosis is considered endemic. The family also had frequent visitors and consumed unpasteurized dairy products from bovine tuberculosis–endemic countries. The cat that had died with signs consistent with pulmonary tuberculosis spent extended close contact with the owner, who died of pulmonary M. bovis infection. All cats in the household had close and frequent contact with both owners. Whole-genome sequencing indicated that the cat and human M. bovis isolates, although closely related, were either 3 or 5 SNPs from sharing a common ancestor. Previous research suggests variable SNP accumulations (0–2) per transmission event, which implies that direct transmission between the owner and cat G is unlikely (15). However, whether the isolates recovered reflect all the genotypes within the individual is unknown. A clinically relevant finding was the use of serologic testing to justify additional procedures necessary for isolating M. bovis and assisting with treatment monitoring. These findings highlight the complexity of diagnosing M. bovis infection in an unanticipated host and setting.

Dr. Ramdas is an associate veterinarian at Just Cats Veterinary Services in Houston. Her practice interests include infectious diseases, and geriatrics.

We thank Michael White for his help in following the human side of this event and facilitating communication with the appropriate public health channels. We also thank Denise Dunbar for providing the M. bovis isolate from the human.