To estimate the prevalence of bovine tuberculosis in the Alpine region, we studied the epidemiology of Mycobacterium caprae in wildlife during the 2009–2012 hunting seasons. Free-ranging red deer (Cervus elaphus) were a maintenance host in a hot-spot area, mainly located in Austria.

Bovine tuberculosis has one of the broadest host ranges of any known zoonotic pathogens. In addition to cattle, bovine tuberculosis affects many wild animal populations in North America, Europe, Africa, Asia, and New Zealand. Under certain conditions, wildlife play a role as reservoir and source of infection for domestic animals. Mycobacterium caprae has been isolated from cattle, domestic goats, domestic pigs, red deer (Cervus elaphus), and wild boar (1). Evidence is increasing that M. caprae is emerging in free-ranging red deer and cattle in the Alps (2,3).

To estimate the prevalence of bovine tuberculosis (which is caused by M. bovis and M. caprae) in wildlife in the Alps, we investigated 1,655 hunted red deer of both sexes and different ages in Austria, Germany, Switzerland (including the Principality of Liechtenstein), and Italy. The deer were hunted specifically for the study by trained hunters. A sampling/hunting plan was calculated in advance that indicated the number of animals needed in each sampling region to calculate prevalence estimates; the number was based on the red deer density of a region. The numbers of animals killed and sampled during 3 consecutive hunting seasons (2009–10, 2010–11, and 2011–12) coordinated nearly perfectly with the sampling plan that had been developed for each sampling area (Table 1). After pathomorphologic examination of carcasses (from Germany, Austria, Italy, Swiss Tessin) or samples (from Swiss St. Gall, Swiss Grisons, and Liechtenstein), we conducted microbiological analysis from sample material. Sample material included both medial retropharyngeal lymph nodes and tracheobronchial, mediastinal, and mesenteric lymph nodes and any other tissue with macroscopically visible lesions (Table 2). For bacteriologic cultivation the sample material was homogenized by using the IKA Ultra Turaxx Tube Drive System (Staufen, Germany), decontaminated with 1% N-acetyl-L-cystein solution and neutralized in phosphate buffer (pH 6.8) as recommended by the World Organisation for Animal Health (4). After sedimentation, inoculation was performed on 2 growth media: Stonebrink including PACT (polymyxin B, amphotericin B, carbenicillin, and trimethoprim) and Lowenstein-Jensen with glycerin and PACT (Heipha Diagnostika, Eppelheim, Germany). After 12 weeks’ incubation, a total of 82 bacterial cultures from 59 hunted red deer from Austria, Germany, and Italy were isolated (Tables 1, 2). All isolates were identified as M. caprae whether by reversed line blotting (Geno Type MTBC, HAIN Lifescience, Nehren, Germany) or by restriction fragment length polymorphism PCR of the gyrB gene, as previously described (5).

M. bovis infections of cattle or deer tonsils led to bacterial colonization in the medial retropharyngeal lymph nodes with subsequent lymphatic spread to pulmonary lymph nodes. Ingestion of the M. bovis bacteria led to lymphatic spread from the primary infection, the gut, to mediastinal or tracheobronchial lymph nodes, which explained the lesions in the mesenteric lymph nodes (6). M. bovis causing tuberculosis is proposed to be a lymphatic disease (6); we propose the same for M. caprae. 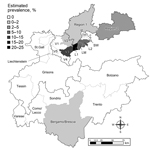 Figure 1. Study area in the Alpine region showing the 22 sampling regions and the estimated prevalences of Mycobacteria caprae. Prevalence ranges are classified into 6 intervals, wherein the upper bounds are not...

We calculated regional prevalence estimates with 95% CIs (Table 1; Figure 1). Prevalence estimates differed greatly among the sampling areas in Austria, Switzerland, Germany, and Italy. Moreover, a spatial cluster of positive samples (hot spot) around the Austrian sampling area Lechtal I was identified using point pattern analysis. The cluster comprised all positive animals from Lechtal I and the contiguous sampling areas of Lechtal Mitte, Regions 2 and 3 of Vorarlberg, and Region 1 of Bavaria (Germany) (p<0.001) (7–10). Consequently, this hot spot included 55 of the 59 positive samples detected in this study (Table 1; Figure 2).

Genotyping was performed from M. caprae isolates by spoligotyping (11) and by mycobacterial interspersed repetitive unit typing and variable number tandem repeat genotyping for 24 loci (12). All isolates in the hot-spot area and the 2 other isolates from Austria were of the Lechtal genotype. The single isolate in Italy, located >200 km from the hot spot, was also of the Lechtal genotype, and an association might exist between this case and cattle previously imported from Austria to Italy (13). By contrast, 2 isolates from Germany found in the Karwendel Mountains were of the Karwendel genotype. All other deer were negative for M. caprae and for M. bovis. After the transnational project, in the 2012–13 hunting season, the prevalence in Bavaria 1 (Germany) was 5.3%, indicating an expansion of or shift in the hot spot.

Our data indicate a localized bovine tuberculosis problem in wildlife in the Alps related to wildlife management strategies. Supplementary feeding is common in the hot-spot area to prevent migration and to keep red deer populations high (3). In the hot-spot area, the overall density is 5.6 animals/km2, but because of aggregation, which is considered the main cause of bovine tuberculosis maintenance in wildlife, winter habitats of red deer around feeding sites have up to 46.2 animals/km2 (Statistik Austria, http://www.statistik.at) (14). Low (0.5–2.5 and 2–4/km2) or medium densities (9.7 deer/km2) with prevalence estimates of 0% were found in Switzerland (Saint Gall, Liechtenstein, and Grisons, respectively) (14). Brescia, the only place in Italy where M. caprae was found in red deer, is considered a high-density region (16 animals/km2), but management strategies promoting aggregation are largely absent in Italy and Switzerland (13). Furthermore, red deer in the hot-spot area are a reservoir for bovine tuberculosis and are the source of M. caprae infections for domestic cattle grazing on Alpine pastures during the summer (3). Molecular-epidemiologic studies indicate that M. caprae isolates from red deer and cattle are of the same genotype (2). Our finding that retropharyngeal lymph nodes and mesenteric lymph nodes were often the primary site of infection suggests oral rather than aerosol transmission. Oral transmission does not require direct contact, either among red deer or between red deer and cattle.

Dr. Fink is a molecular biologist at the Austrian Agency for Health and Food Safety. Her primary research interests include epidemiology, emerging infectious disease, biosafety, and biosecurity.

We thank Michael Schwarz for providing the maps, Sabrina Scheriau for processing statistical data, Barbara Pohl for providing technical assistance, and Alessandra Gaffuri and Mario Chiari for providing logistical support of the project.

This work was funded by the Emerging and Major Infectious Diseases in Livestock Animals ERA-Net (European Research Area–Net) Project “Tuberculosis in Alpine Wildlife,” together with the national founders of this project: the Austrian Ministry of Health, German Ministry of Education and Research, the Swiss Federal Veterinary Office, and the Italian Ministry of Health.