We isolated Sindbis virus (SINV) from the enzootic mosquito vectors Culex torrentium, Cx. pipiens, and Culiseta morsitans collected in an area of Sweden where SINV disease is endemic. The infection rate in Cx. torrentium mosquitoes was exceptionally high (36 infections/1,000 mosquitoes), defining Cx. torrentium as the main enzootic vector of SINV in Scandinavia.

In Sweden, Finland, Russia, and South Africa, Sindbis virus (SINV; family Togaviridae, genus Alphavirus) is an etiologic agent for outbreaks of rash and long-lasting polyarthritis (1). Ecologically, SINV is a zoonotic mosquitoborne virus that naturally circulates in bird populations but only incidentally infects humans (1). Previous detections and isolations of SINV from field-collected mosquitoes identified the ornithophilic mosquitoes Culex pipiens/Cx. torrentium and Culiseta morsitans as possible enzootic vectors of SINV and the generalist mosquitoes Aedes cinereus and Ae. rossicus, which feed on birds and humans, as potential bridge vectors for transmission of the virus from viremic birds to humans (2,3; J.C. Hesson, J.O. Lundström, unpub. data). However, female Cx. torrentium and Cx. pipiens mosquitoes are morphologically indistinguishable, so all previous virus isolates from these species were from pools that may have contained both species. The distinction between Cx. torrentium and Cx. pipiens is necessary because vector competence experiments show great differences between the capacities of the 2 species to become infected with and to transmit SINV (4,5). Cx. torrentium is highly superior to Cx. pipiens as a vector of SINV in the laboratory (4,5), but the extent to which the 2 species are infected in nature is unclear.

We determined the natural SINV infection rates (IRs) in Culex mosquitoes, which were identified by using a newly developed molecular method for reliable identification of Cx. torrentium and Cx. pipiens mosquitoes (6). We also studied the simultaneous occurrence of SINV in Cs. morsitans mosquitoes.

Every 2 weeks during July 13–September 13, 2009, we collected adult female mosquitoes by using 35 miniature light traps from the US Centers for Disease Control and Prevention (Atlanta, GA, USA) baited with carbon dioxide; the traps were set within the regular mosquito surveillance area of the River Dalälven floodplains in central Sweden (7). Mosquitoes were kept cold on a chilled table during morphologic identification and stored at −80°C. Legs were removed from mosquitoes morphologically identified as Cx. pipiens/Cx. torrentium and used for DNA extraction, enabling identification of the individual specimens to species by using a previously described molecular method (6).

RNA was extracted from 668 mosquito bodies without legs (301 Cx. torrentium, 367 Cx. pipiens) and from 74 pools of mosquitoes pooled by collection trap and week (290 Cs. morsitans); pool sizes ranged from 1 to 19 mosquitoes. The mosquitoes were processed for RNA extraction, real-time reverse transcription PCR (rRT-PCR), and virus isolation on Vero cells as previously described (3). 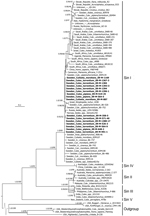 SINV was successfully isolated from all 16 rRT-PCR–positive mosquito samples (Table 2). Part of the SINV E2 envelope glycoprotein gene was sequenced as previously described (8). The phylogenetic analysis included all genomic sequences obtained in this study together with previously published sequences for 63 other virus strains (8). The results showed that all new strains belonged to the SINV-I genotype and have close relationships with strains from Europe, the Middle East, and South Africa (Figure).

The observed SINV-I IRs are very high for both species, and the IR for Cx. torrentium is among the highest ever reported for mosquitoes. This could partly be attributed to the fact that single mosquitoes were analyzed, as compared with the more common technique of pooling. This higher IR would have remained undetected if only pooled mosquitoes were analyzed, even though our original pools consisted of only 10 individual mosquitoes. Cx. pipiens mosquitoes are generally considered a secondary enzootic vector of SINV because, as in Sweden, they are less frequently found infected in nature in South Africa, Israel, and Saudi Arabia, where Cx. univittatus mosquitoes are the main SINV vector (9–11).

Dr. Hesson is a researcher at Uppsala University in Sweden. Her primary research interests are mosquito-borne human pathogens, especially the effect of mosquito ecology on virus transmission.

We are grateful to Pernilla Wahlqvist for collecting and identifying mosquitoes and to the Royal Swedish Academy of Sciences and the Zoological Foundation for financial support.