In 2014, novel highly pathogenic avian influenza A H5N2, H5N5, H5N6, and H5N8 viruses caused outbreaks in Asia, Europe, and North America. The H5 genes of these viruses form a monophyletic group that evolved from a clade 2.3.4 H5N1 variant. This rapid emergence of new H5Nx combinations is unprecedented in the H5N1 evolutionary history.

A highly pathogenic avian influenza (HPAI) A(H5N1) virus (A/goose/Guangdong/1/1996) was first detected in China in 1996. Multiple clades, defined by phylogenetic characterization of the H5 hemagglutinin (HA) (1), have evolved and spread across Asia, Africa, and Europe, causing enormous losses to the poultry industry. A total of 694 human infections (death rate 58%) were recorded during 2003–2014 (2).

During the evolution of HPAI H5N1 viruses, reassortment events involving the 6 internal gene segments have often been detected (reviewed in [3]), but novel subtypes (i.e., combinations of HPAI H5 with other N subtypes) have rarely been isolated. In 2014, a novel highly virulent reassortant HPAI H5N6 virus (4) caused multiple outbreaks in Southeast Asia and 1 lethal human infection, which led the Food and Agricultural Organization of the United Nations to issue a warning (5). Outbreaks of novel HPAI H5N8 virus in South Korea (6,7), China (8), and Japan raised further concern, and in November 2014, this subtype emerged outside Eastern Asia, causing outbreaks in poultry farms in Germany, the Netherlands, the United Kingdom, Canada, and the United States.

To determine the evolutionary history of the HA proteins of these novel HPAI subtypes, we collected all HPAI H5 coding region sequences for all subtypes, except H5N1, and then aligned them with 850 H5N1 HA sequences representing all HPAI H5N1 clades (selected from ≈5,000 total sequences) and constructed a phylogenetic tree (Figure 1). Reassortment events leading to the generation of novel H5Nx subtypes are almost uniquely restricted to a single branch of the tree; the branch contains all isolates of the recent HPAI H5N2, H5N5, H5N6, and H5N8 outbreaks. The only other H5Nx reassortants that have been identified are a limited number of H5N2 subtype isolates that are present in 5 other branches of the tree. 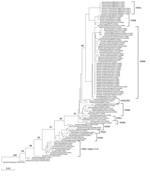 A more detailed analysis (Figure 2) revealed that the monophyletic H5 clade harboring all the recent novel H5Nx reassortants evolved from early members of H5N1 clade 2.3.4 (a group of highly similar H5N1 viruses isolated in China in 2005). On January 12, 2015, the World Health Organization recommended designation of the novel H5 clade as 2.3.4.4 in anticipation of a revised H5 nomenclature (11). A previously described (12) H5N5 virus (A/duck/Guangdong/wy24/2008) is the first detected reassortant subtype within this clade; the donor of the NA segment of this virus could not clearly be identified (13). Subsequent reassortment events between viruses harboring an HA segment originally derived from the novel H5N5 viruses and a range of other avian influenza viruses have generated the H5N2, H5N6, and H5N8 subtypes.

The H5N8 and the H5N6 viruses have segregated into 2 branches. Analysis of the N6 proteins (data not shown) indicates that the H5N6 viruses (all from southern China) are the result 2 independent reassortment events with avian H6N6 strains. Unfortunately, sequences from the recent H5N6 outbreaks in Vietnam (5) are not yet present in the databases. The 2 different H5N8 virus clusters most likely evolved from a single H5N8 reassortant virus (A/duck/Jiangsu/k1203/2010) that was isolated in China in 2010 (13). Both clusters were identified in Korea in 2014, whereas members of the most evolved cluster were detected later in 2014 in Japan, Germany, the Netherlands, and the United Kingdom.

Since 1996, reassortment events involving H5N1 HPAI viruses have, as far as detected, only rarely led to the generation of new H5Nx subtypes. The 2008 generation of an H5N5 reassortant virus (prototype A/duck/Guangdong/wy/24/2008) represents the creation of a new HPAI virus that has led to the generation of a range of novel H5Nx reassortants that acquired novel NA proteins (H5N2, H5N6, and H5N8). The H5N6 reassortant became of particular concern after spreading over a wide geographic area in Southeast Asia and causing a fatal human infection in China (5). Meanwhile, the H5N8 subtype spread to Europe in November 2014, resulting in large economic losses in the poultry industry. On the basis of reports from the World Organisation for Animal Health, H5N8 and H5N2 viruses were detected in Canada and the United States in December 2014.

In this study, we exclusively focused on the unique occurrence of new HA–NA combinations. Recent publications have already described the reassortment events of the internal gene segments of several of the viruses mentioned above (6–8,11–14). In contrast to novel HA–NA combinations, novel constellations of internal gene segments are far from unique and have frequently been observed for HPAI H5N1 viruses (3). Our analysis indicates that new HPAI viruses have emerged that carry H5 proteins capable of matching with multiple NA subtypes. Whether the formation of new HA–NA combinations confers a selective advantage that contributed to the emergence of these novel subtypes is not known and requires elaborate research. However, the balance between HA (receptor binding) and NA (receptor cleavage) protein activities is known to be critical to cell entry and host tropism and may be an important factor that lead to the emergence of new HA–NA combinations. In contrast to HPAI H5N1, the novel clade 2.3.4.4 viruses, excluding H5N6 viruses, have not caused human infections. However, it is unknown to what extent the repeated acquisition of a new NA proteins could enhance the rate of evolution of the HA protein. Obviously such changes could further affect host and tissue specificity, potentially having serious consequences. Therefore, surveillance is required to monitor further spread, evolution, and potential changes in host range.

We gratefully acknowledge the authors and originating and submitting laboratories of the sequences from the GISAID EpiFlu Database, on which part of this research is based. All submitters of data may be contacted directly via the GISAID website (http://www.gisaid.org).