Figure 1. The lifecycle of the Taenia solium cestode parasite.

Neurocysticercosis is a leading cause of acquired epilepsy in the developing world (1,2). The disease occurs when larvae of the pork tapeworm, Taenia solium, encyst in the human brain; this process causes a broad range of neurologic signs and symptoms, including seizures, headache, obstructive hydrocephalus, encephalitis, stroke, and cognitive and other mental health disorders (3,4). Neurocysticercosis is endemic in poor rural communities in Latin America, sub-Saharan Africa, and Asia, where pigs can access and ingest human feces (Figure 1). However, the disease is also of increasing public health concern in the United States, especially in the immigrant population and among persons who have traveled to regions where cysticercosis is endemic (5).

The World Health Organization designates cysticercosis as a neglected tropical disease (NTD) and has called for international efforts to strengthen surveillance (6–8). The disease remains neglected partly because the scale of the problem has not been well defined (2). In most disease-endemic regions, population-level data are sparse because surveillance for neurocysticercosis is nonexistent and diagnostic neuroimaging is typically unavailable. In the United States, there is an opportunity to collect population-based data on neurocysticercosis because of the large immigrant population at risk for infection, the widespread availability of neuroimaging, and the well-established disease surveillance infrastructure. However, only Alaska, Arizona, California, New Mexico, Oregon, and Texas require reporting of neurocysticercosis.

We analyzed hospital discharge data contained in the Nationwide Inpatient Sample (NIS) for 2003–2012 (10,11). The NIS, a stratified weighted sample of short-term and nonfederal hospitals, is designed to approximate a 20% sample of all community hospitals in the United States. As of 2012, 47 states participated in reporting discharge data to the NIS (only Alabama, Delaware, Idaho, and the District of Columbia had not participated), creating a sample representing 95% of the national population. The NIS is the largest collection of longitudinal inpatient care data in the United States and holds information on ≈8 million hospitalizations from >1,000 hospitals each year (10). NIS data are de-identified and include information on demographics, diagnostic and procedural codes, length of stay, discharge status, total charges, and expected payees associated with each hospitalization.

To account for the sampling design of the NIS, we analyzed all data by using the survey family of commands in Stata 13 (StataCorp LP, College Station, TX, USA). We applied hospital discharge weights provided in the NIS to estimate total national hospitalizations on the basis of the stratified sample. All sampled hospitals, regardless of whether they had a patient who was hospitalized with neurocysticercosis, were included for calculation of SEs and CIs. We examined neurocysticercosis hospitalizations by patient age, sex, race, place of service, discharge status, and length of stay; US region; associated diagnostic and procedural codes; and hospitalization charges. State-level assessment was not possible because of the sampling and stratification strategy used in the NIS. Mean annual hospitalization rates were calculated as the weighted number of hospitalizations per 100,000 population on the basis of the US Census Bureau data for each year during the study period (15). Age- and sex-adjusted rates were calculated by using the direct standardization method and the 2005 US Census population as the reference population.

We analyzed hospital charges that were billed to private insurance, Medicaid, Medicare, and other sources from the payer’s perspective. Charges represent the amount that hospitals billed for services, not the actual cost of providing these services. Generally, total charges did not include professional fees, noncovered charges, or charges incurred in the emergency department unless the patient was admitted directly from the emergency department into the hospital. We adjusted all charges for inflation by using the Consumer Price Index, setting the base year to 2012. 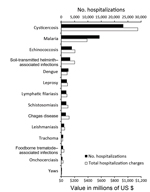 Figure 2. Frequency and total charges of hospitalizations in the United States during 2003–2012 for 13 of the World Health Organization (WHO)–designated neglected tropical diseases (NTDs) and malaria. Estimates were determined by using...

The study findings demonstrate that neurocysticercosis poses considerable health and economic problems in the United States, especially among the Hispanic population. Over the 10-year study period, >18,500 hospitalizations for neurocysticercosis occurred, totaling hospital charges of >US $908 million, of which 40% was billed to publicly funded insurance programs. Hospitalization stays were prolonged and expensive, reflecting the complicated nature of acute disease management. Hospitalizations and associated charges for cysticercosis exceeded the totals for malaria and for all of the other NTDs combined.

We report hospitalization diagnostic codes that may not represent the distribution of disease manifestations experienced by individual patients. For example, although a diagnostic code for headache was listed for 11% of hospitalized patients, only patients with headaches associated with underlying pathology requiring acute intervention, such as obstructive hydrocephalus, are likely to be admitted and therefore represented in this study. Even then, the diagnosis of headache may be underrepresented. There were twice as many hospitalizations with diagnostic codes for hydrocephalus and encephalitis than for headache, although both of these manifestations would be expected to be associated with headache (22). Similar caution is suggested in interpreting the frequency of other diagnoses presented here. It may seem contradictory that only 17% of hospitalizations had a procedural code for neuroimaging. However, because most imaging for neurocysticercosis would be expected to occur in the emergency department before admission, the infrequent coding for neuroimaging may reflect exclusion of these procedural codes from the hospital discharge summary.

The use of administrative databases, such as the NIS, to obtain data for this study does have drawbacks, including several limitations we already described. An additional drawback to using the NIS was the inability to identify multiple hospitalizations for a single person, which precludes the ability to estimate the prevalence or incidence of disease. Although the number of states participating in NIS has grown over the years, several states still do not participate in reporting hospital discharge data. In addition, the regional sampling structure of the NIS does not allow for accurate state-level estimates, limiting the ability to identify specific states whose populations are at increased risk for neurocysticercosis. Furthermore, the lack of in-depth demographic and clinical information in the NIS limits the type of questions that can be addressed. For example, knowing the country of birth or travel history of patients with neurocysticercosis could help understand their source of exposure.

Dr. O’Neal is an assistant professor of public health and preventive medicine at Oregon Health & Science University, Portland, Oregon, USA. His primary research interest is the epidemiology and control of Taenia solium infection.