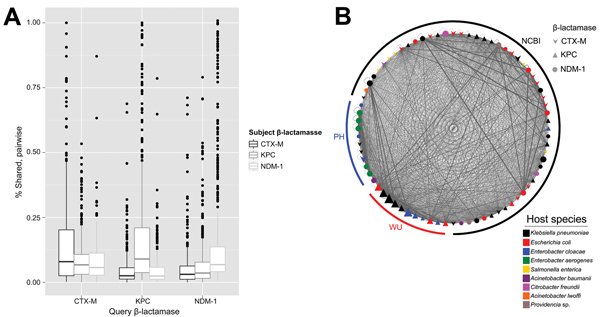 Figure 2. Pairwise BLAST identity (http://blast.ncbi.nlm.nih.gov/Blast.cgi) of all CTX-M genes, Klebsiella pneumoniae carbapenemase (KPC), and New Delhi metallo-β-Lacatamase-1 (NDM-1) plasmids from isolates collected in Pakistan and the United States plasmid preparations, and the National Center for Biotechnology Information database complete plasmids. An all-against-all plasmid BLAST was performed and plasmid interactions were defined by the percentage of the query plasmid conserved (at ≥99% identity) in the subject plasmid. A) Plasmid interactions collected based on the defining β-lactamase of their query and subject plasmids. Box and whisker plots represent the range of pairwise sharing values within this population of plasmids. Upper and lower boundaries of the box correspond to the first and thirds quartiles; whiskers (error bars) represent 1.5 times the interquartile range; points beyond the whiskers represent outliers. B) Network map in which nodes represent individual plasmids and lines represent regions shared between plasmids. Line width is proportional to the number of nucleotides contained in fragments >500 bp in length at >99% sequence identity. Genetic elements repeated within the same plasmid DNA are represented by lines that leave and return to the same node. Plasmid sequence origin is indicated in arcs around the network.