Influenza causes annual outbreaks that result in >200,000 hospitalizations and 3,300–49,000 deaths annually in the United States (1). Children <2 years of age, persons >65 years of age, pregnant women, and those with underlying health conditions are at greater risk for developing serious complications (e.g., pneumonia) from influenza and are at greater risk for hospitalization and death. Despite continuing vaccine and treatment interventions, the public health effects of annual influenza epidemics remain substantial.

Although patient-level risk factors for severity of influenza have long been identified, attention is being directed towards reporting neighborhoods and contextual and environmental characteristics that increase risk for adverse health outcomes and that are independent of patient-level attributes (2). Geographic-based measures include physical, social, and economic characteristics of neighborhoods, such as poverty level, education, residential segregation, psychosocial stress, unemployment, inadequate transportation, social networks, distance to medical facilities, access to prevention and treatment services, insurance status, environmental exposures, and housing and density characteristics. Disparities in health outcomes likely result from a combination of factors that influence an individual’s exposures, risk behaviors, susceptibility, treatment options, and social contextual factors (3–5). However, rarely are these measures collected through population-based surveillance systems. Previous work investigating influenza disparities showed a strong positive correlation between influenza hospitalization rates and geographic areas of high poverty and household crowding (6,7).

The Study Setting and Population

Using the Tennessee EIP Influenza Hospitalization Surveillance Network, we analyzed data collected during the 2007–08 through 2013–14 influenza seasons. As part of the Influenza Hospitalization Surveillance Network, the Tennessee EIP conducts population-based surveillance for laboratory-confirmed influenza hospitalizations in 8 counties located in Middle Tennessee, which includes the city of Nashville, located in Davidson County, and its bordering suburban and rural counties: Wilson, Rutherford, Williamson, Dickson, Cheatham, Robertson, and Sumner (Figure 1). The population size of the catchment area is ≈1,557,000 persons.

Laboratory confirmation for influenza virus infection was determined by reverse transcription PCR, viral culture, direct or indirect fluorescent antibody staining, or rapid antigen testing. Influenza testing was ordered at the discretion of the treating clinicians. Those hospitals without onsite PCR capacity were encouraged to send specimens to the Tennessee Department of Health Laboratory Services for reverse transcription PCR confirmation. Surveillance for laboratory-confirmed influenza hospitalization was reviewed and determined to be exempt by the Human Subjects Review Board at the Centers for Disease Control and Prevention and by the Human Research Protection Program at the Vanderbilt University School of Medicine.

Information about demographic characteristics, underlying conditions, clinical outcomes, and antiviral treatment was collected from medical record review by trained reviewers who used a standard questionnaire. Surveillance was conducted annually during the influenza season (October–April). During the influenza A(H1N1) pandemic of 2009–10, surveillance continued throughout the summer. We included race in the analysis but did not stratify by ethnicity because of low numbers identified as Hispanic ethnicity.

Each participant’s home address was geocoded to a latitude and longitude point by using ArcMap version 10.0 (10). Most (94%) addresses were geocoded successfully; those that could not be geocoded to rooftop accuracy were excluded. Each home address was assigned to a Tennessee census tract on the basis of location.

We used the assigned census tracts to extract data from the 2010 US Census and from the 2007–2011 American Community Survey. For each tract, census data included tract population, percent below poverty, health insurance status, education, employment, and percentages of female head of household and household crowding. We also calculated population density per square mile by using census population totals and areas calculated within ArcMap. When possible, we categorized sociodemographic variables according to previously published standards by the Harvard Geocoding Project (11). Table 1 shows the categorization of the major sociodemographic factors from the American Community Survey.

We calculated the average annual incidence of influenza hospitalizations per 100,000 person-years during the 7-year period as the proportion of persons hospitalized in the catchment area per 100,000 persons per year. We also calculated the age-standardized rate ratio (RR), rate difference (RD), relative index of inequality (RII), concentration curve (CC), and its associated concentration index (CIndex) for each census variable. The RII is used as a measure of the strength of the influence of SES on health inequality. RII is calculated as the exponent of the slope of a Poisson regression model by using incidence rate as the outcome variable and the proportion of the population in a socioeconomic group as the predictor variable. The RII can be interpreted similarly to an incidence RR by comparing those in the quantitatively highest category with those in the lowest category. For example, an RII of 2.9 would indicate a 190% increase in risk if those in the highest categorization are compared with those in the lowest. CCs were used to discern whether results were biased because of cutoffs used for variable categorization. The CC is a graph of the cumulative percentage of cases versus the cumulative percentage of the population distribution of the census tract variable. If no health disparities are present, the curve will fall on the diagonal. A curve above the diagonal indicates that patients are concentrated in the highest risk category. What is shown qualitatively by the CC can be summarized quantitatively by the CIndex. It is computed as twice the area between the curve and the diagonal line. A negative CIndex shows a disparity in influenza hospitalizations regarding levels of the census variable that indicate low SES (13). If no census variable-related inequality is present, the CIndex is 0. 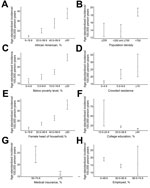 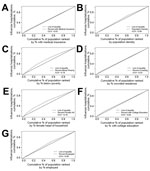 Although every variable showed some deviation from the line of equality (Figure 3), percent below poverty and percent female head of household each had a CIndex of −0.16 (Figure 3), indicating strong disparities. The percent employed variable also showed a disparity in hospitalizations with a CIndex of −0.08.

We calculated age-standardized incidence by race for selected characteristics (Table 2). A comparison of white patients residing in neighborhoods with >20% of persons living below poverty with those living in areas with <5% below poverty resulted in an RII of 2.5 (95% CI 2.0–3.1); the RII for the same comparison for African Americans was 3.3 (95% CI 2.2–4.8). Approximately two thirds of African Americans hospitalized with influenza during the study period resided in census tracts with the highest percentage of persons living below poverty (i.e., >20%). We also calculated incidence for age and race for household crowding and female head of household. The RII for African Americans by percentage of female heads of household was 3.6 (95% CI 2.5–5.1), compared with 2.4 for whites (95% CI 2.0–3.0). Overall age-standardized rates for household crowding were similar for each race group (Table 2).

Our findings that neighborhood SES disparities influence influenza hospitalizations rates extends conclusions found in other studies (3,6,7,15,16). Population-based influenza hospitalization surveillance data from Connecticut showed that increasing hospitalization rates for both adults and children were associated with decreasing SES measures and increasing household crowding (6,7). The similar findings in these 2 population-based surveillance systems in different US geographic locations, a highly populated state in the Northeast and a more rural state in the Southeast, support the robustness of these associations. Other studies have also identified neighborhood social and physical characteristics, including housing conditions and environmental exposures, as risk factors for asthma and influenza hospitalization (6,17–20). Charland et al. reported that communities with increasing prevalence of obesity, less physically active populations, and lower fruit and vegetable consumption had higher rates of influenza-related hospitalizations (21).

We incorporated 4 distinctive measures of socioeconomic disparities (RR, RD, RII, and CIndex) into the statistical analysis that builds on the work of Krieger (22) in measuring the effects of health disparities on influenza hospitalization in Tennessee health outcomes. We also constructed CCs, graphic representations of disparities. Although the RR and RD are traditionally reported in such analyses and are easy to interpret, they are sensitive to the values used in categorization of the socioeconomic variable. In contrast, the RII and CIndex are measures that reflect the experiences of the entire population and are sensitive to the distribution of the population across socioeconomic groups. Any CIndex with a value <0 indicates disparity (13).

Surveillance systems have usually not collected individual-level SES data but often use surrogate measures (e.g., race) to monitor health disparities. These surrogate measures have been inadequate to quantify SES inequalities in health. Area-based measures are the only currently available means to understand health inequities in population-based surveillance systems and may be uniquely relevant for monitoring the role of neighborhood in SES health inequities. Furthermore, the geospatial distribution of infectious diseases and area-based risk factors might be used to design, target, monitor, and assess public health programs, including prevention interventions for influenza. Age and underlying conditions of persons are currently used as the basis for targeted vaccination strategies. However, because area-based measures are strong risk factors for severe influenza, neighborhoods may become major targets for future preventive interventions.

This study has several limitations. First, data from population-based influenza hospitalization represent those who sought care and were tested for influenza by their clinician, and testing practices likely varied across hospitals in the catchment area. However, these data are consistently used each year by the Centers for Disease Control and Prevention to evaluate the severity of influenza and to determine persons at risk in real time during the influenza season. Second, we did not assess differences in influenza vaccination status among patients because data on vaccination coverage by census tract were not available, and the number of reported vaccinations on EIP case report forms was very low. Finally, neighborhood SES may not apply to specific individual-level SES characteristics and may not be the same for different persons. That is, neighborhood characteristics evaluated in this study may not well characterize individual persons living in those neighborhoods. However, these variables offer insight into the role of neighborhood in determining influenza health outcomes. We have defined neighborhoods as census tracts, although nearby neighborhoods may also influence health outcomes and disparities.

In summary, increasing rates of hospitalizations in Middle Tennessee were associated with increasing percentages of the population living below poverty, having female heads of households, living in densely populated areas, and living in crowded household conditions. Decreasing hospitalization rates were seen in areas with increasing percentages of the population with health insurance, college education, and employment. The well-tested procedures for incorporating neighborhood-level data into health studies described by the Harvard Geocoding Project (11), along with the application of infrequently used. CIndexes and CCs implemented in this study have shown the importance of measuring neighborhood-level SES disparities in determining health outcomes, such as incidence of influenza hospitalization. These population-based data from Tennessee reinforce the association of area-based measures of SES with incidence of influenza hospitalization and emphasize the important role that neighborhood socioeconomics play in explaining rates described here. The study also suggests that, because neighborhood characteristics are strongly associated with hospitalization rates, they should be considered when designing targeted prevention strategies such as vaccination programs.

Dr. Sloan is an assistant professor in the Department of Health Science at Brigham Young University. Her primary research interest is the spatial epidemiology of both chronic and infectious respiratory diseases.

We thank Karen Leib and Katie Dyer for their contributions to Influenza Hospitalization Surveillance Network.

This analysis was supported by Cooperative Agreement 5U50CK000198-03 from the Centers for Disease Control and Prevention, Atlanta, GA, USA.