In the United States, community-associated (CA) methicillin-resistant Staphylococcus aureus (MRSA) infections in otherwise healthy persons in the community, first reported in the late 1990s (1), have reached epidemic dimensions (2). Despite considerable research efforts, the molecular underpinnings of the epidemiologic success of CA-MRSA are still not completely understood. Most typically connected with CA-MRSA is Panton-Valentine leukocidin (PVL). However, the role of PVL in CA-MRSA infection is controversial, primarily because of contradictory results from studies of animal infection models (3). A common belief is that if a clone from a patient with CA–S. aureus infection is positive for PVL, the S. aureus is probably a more dangerous clone and the patient would require specific care (4).

In the United States, virtually all CA-MRSA infections are caused by a PVL-positive clone of pulsed-field type USA300 (5). CA-MRSA infections with USA300 have also occasionally occurred outside the United States and adjacent regions. However, according to a recent study, they are derived from multiple importation events, suggesting that further spread in those locations is unlikely (6). Rather, global CA-MRSA infections are caused by geographically divergent clones that are unrelated to USA300. Like USA300, most of them contain PVL genes (2), although PVL is extremely rare in hospital-associated MRSA clones. This epidemiologic correlation is the predominant basis of the notion that PVL is causally associated with the enhanced virulence potential of CA-MRSA clones (7). Of note, despite generally enhanced virulence in animal models at levels similar to that of USA300 (8), the number of infections caused by global CA-MRSA clones remains limited (9,10). This situation raises the question of whether non-USA300 global CA-MRSA lineages have the potential to further intensify infection frequency and severity, and if so, whether PVL would be a necessary factor in such a scenario.

The CA-MRSA lineage that predominates in China and many other parts of Asia, thus threatening the largest global population, is sequence type (ST) 59 (10). Recent studies performed in Taiwan and northern Vietnam found a correlation between a PVL-positive subset of ST59 (Taiwan clone) and infection, but PVL-negative ST59 (Asia–Pacific clone) was found to be a largely noninfectious colonizer (11,12). Therefore, a causal relationship between PVL and infection has also been proposed for that CA-MRSA lineage.

We studied S. aureus isolates collected over 10 years (2005–2014) at Shanghai Renji Hospital, Shanghai, China, a large teaching hospital at which ≈10,000 patients from the entire Shanghai metropolitan area are admitted each day. We obtained 2,048 infectious S. aureus isolates and characterized them by multilocus sequence and spa typing, antibiotic resistance profiling, determination of the staphylococcal cassette chromosome (SCC) mec type (encoding methicillin resistance), and analytical PCR to determine presence of the lukSF genes encoding PVL. For isolates obtained during 2005–2010, we investigated randomly selected subsets (100 isolates/year); for isolates obtained during 2011, 2012, and 2014, we investigated all isolates. No isolates were collected in 2013. CA–S. aureus was defined as an isolate obtained from either an outpatient or an inpatient (including from general and urgent care and emergency rooms) <24 h after hospital admission, who lacked risk factors (contact with the hospital environment in the 6 months preceding the culture, S. aureus infection history, residence in a long-term care facility in the 12 months before culture, presence of a central vascular catheter at the time of infection, or recent use of antimicrobial drugs). These data were obtained by a review of medical records. The study was approved by the ethics committee of Renji Hospital, School of Medicine, Shanghai Jiaotong University, Shanghai (protocol RJ-H-2015–0221). 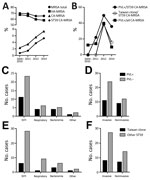 The ST59 CA-MRSA isolates were genetically heterogeneous and belonged to 7 spa types, predominantly t437 (31/56; 55%), t216 (12/56; 21%), and t441 (6/56; 11%). This finding is in contrast to the scenario described for USA300 CA-MRSA isolates, which are closely related (14), and suggests independent acquisition of SCCmec elements by genetically divergent parental ST59 methicillin-sensitive S. aureus strains.

CA-MRSA infections caused by a non-USA300 clone increased significantly in a highly populated area in China. Whether our findings are representative of all of China and adjacent countries remains to be addressed. Our findings do not support the previously indicated correlation of the PVL-positive ST59 subset (Taiwan clone) with infection (11,12). Thus, our study provides epidemiologic evidence challenging the widespread notion about a significant role of PVL in CA-MRSA dissemination in the ST59 lineage and in general. Inasmuch as our findings underscore the idea that the development of CA-MRSA clones is less limited to specific genetic backgrounds than previously thought, they underscore that novel successful CA-MRSA clones will probably continue to emerge.