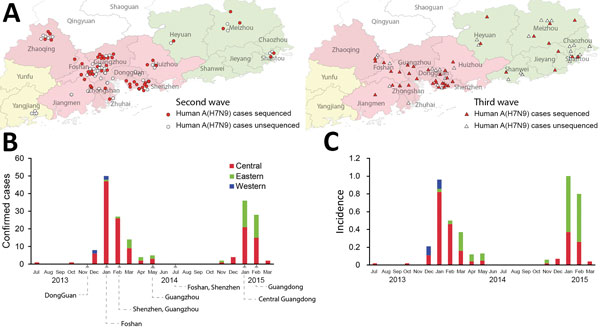 Figure 1. Avian influenza A(H7N9) infection in humans, Guangdong, China, 2013–2015. A) Geographic distribution of H7N9 in humans during the second (June 2013–May 2014) and third (June 2014–May 2015) waves. Confirmed cases in humans identified during the second wave are marked with circles and during the third wave with triangles. H7N9 isolates newly sequenced in this study are highlighted in red. Pink and green shading indicates city prefectures in central and eastern Guangdong Province, respectively. B) Numbers of human H7N9 infections in different regions of Guangdong Province during 2013–2015. Arrows indicate the dates at which live-poultry markets were closed in epicenter cities. No infections were reported during April–October. C) Incidence (human H7N9 infections/1 million population) in each region.