To the Editor: The first case of human infection with highly pathogenic avian influenza A(H5N1) virus in Vietnam was reported in December 2003 (1), and >120 human cases were confirmed through 2013, with a high case-fatality rate (2). In 2013, clade 2.3.2.1a/c H5N1 viruses circulated widely in poultry across the country, although clade 1.1.1/1.1.2 H5N1 viruses predominated in poultry from the Mekong Delta region to central Vietnam (3,4).

In 2014, two cases of human infection with A(H5N1) virus were identified in southern Vietnam. One case was associated with a clade 1.1.2 reassortant virus, A/Vietnam/14012902/2014 (Global Initiative on Sharing All Influenza Data [GISAID; http://www.gisaid.org] accession nos. EPI624919–EPI624926), which had been previously detected in Cambodia and Vietnam (5,6). We isolated the virus from the other case, performed phylogenetic analysis to identify the clade of this virus, and identified a novel virus that had undergone gene reassortment.

By gene sequencing analysis, A/Vietnam/14011801/2014 was found to have the multibasic cleavage site of hemagglutinin (HA) protein, which indicates highly pathogenic avian influenza A(H5N1) viruses, and was shown to predict binding specificity to an avian α2,3 sialic acid receptor. The neuraminidase gene possessed no amino acid substitutions associated with decreased antiviral activity, nor did the virus have amino acid substitutions associated with increased adaptation, virulence, infectivity, or transmissibility in mammalian hosts, including the E627K and D701N mutations in polymerase basic protein 2 (7).

Phylogenetic analyses of the 8 viral genes of A/Vietnam/14011801/2014 were performed by using databases (GISAID and the Influenza Virus Resource, National Center for Biotechnology Information, Bethesda, MD, USA; http://www.ncbi.nlm.nih.gov/genomes/FLU/FLU.html) that contained complete sequences of viral genomes belonging to clades 1.1.1, 1.1.2, and 2.3.2.1 a/b/c, most of which were collected in Vietnam, particularly after 2012. Neighbor-joining and Kimura 2-parameter methods were implemented by using MEGA version 5.0 software (http://www.megasoftware.net). Reliability of the phylogenetic analysis was tested by using 1,000 bootstrap replications. Lineages of the HA gene were defined by using previously described criteria (8). Lineages of the other 7 genes were defined by using criteria and nomenclature of Nguyen et al. (9). 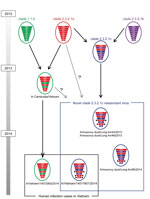 As multiple clade viruses co-circulate, reassortment events occur frequently in Vietnam. Continuous surveillance of avian influenza A(H5N1) viruses, not only in humans but also in poultry and wild birds, is needed for infection control measures during epidemics of these viruses.

This study was partially supported by Grants-in-Aid for Emerging and Reemerging Infectious Diseases from the Ministry of Health, Labour and Welfare, Japan.