The hyper-virulent emm59 genotype of invasive group A Streptococcus was identified in northern Arizona in 2015. Eighteen isolates belonging to a genomic cluster grouped most closely with recently identified isolates in New Mexico. The continued transmission of emm59 in the southwestern United States poses a public health concern.

Several cases of invasive group A Streptococcus (GAS) disease were detected in January 2015 in a northern Arizona hospital. A substantive percentage of the cases were associated with a homeless shelter and a local jail; outbreak case-patients were predominantly male and Native American. Other studies have shown an increase in infection risk for invasive GAS in Native American/First Nations populations (1,2), and outbreaks within this population in Arizona have been previously documented (3). Whole genome sequence analysis determined that the hypervirulent subtype emm59 was present among the first cases analyzed in early 2015. emm59 is known to have caused a nationwide outbreak of invasive GAS in Canada during 2006–2009 (4,5), and cases and outbreaks have been reported in the United States (6–8).

We identified isolates for sequencing from 29 invasive GAS cases diagnosed in patients in a northern Arizona hospital during January–July 2015 and randomly selected an additional 99 GAS isolates from a repository of >2,000 Arizona GAS isolates collected during 2002–2006 (no isolates from patients in Arizona were available for 2007–2014). Four additional isolates from central Arizona identified in 2015 were included in the analysis (Technical Appendix Table). All isolates were grown on 5% sheep blood tryptic soy agar plates (Hardy Diagnostics, Santa Maria, CA), and incubated at 37°C with 5% CO2. DNA was extracted by using a DNeasy Blood and Tissue Kit (QIAGEN, Valencia, CA, USA) following manufacturer’s protocol. Genomic DNA libraries were prepared by using the Nextera XT library prep kit (Illumina, San Diego, CA) and sequenced with paired-end reads (250 bp) on an Illumina MiSeq instrument, as previously described (9). The finished genome of the emm59 Canadian clone MGAS15252 (GenBank accession no. CP003116) and high-quality publicly available sequence-read data from 44 US isolates, from NCBI short read archive (BioProject #PRJNA194066), were included in the subsequent phylogenetic analyses. The final core genome (all nucleotide loci found in all genomes) for single-nucleotide polymorphism (SNP) detection was 1,636,024 bp (98.6% of reference).

The 18 Arizona emm59 cases occurred during January–July 2015 (Table). An emm59-only phylogenetic analysis demonstrated the apparent presence of multiple lineages of emm59 in the 2015 Arizona isolates (Figure 1). A distinct clone consisting of 14 of the 18 emm59 isolates were separated from each other by only 0–4 SNPs, genomically supporting the presence of an ongoing outbreak; >8 of these patients were epidemiologically linked to physical contact, cohabitation, or both with 1 other person (data not shown). The additional emm59 isolates make up additional lineages separated from one other by 8–28 SNPs. No recombination was identified among the Arizona isolates. A relatively large number of SNPs and indels were seen within an approximate 23-kilobase region (Figure 1). This region has been previously reported to contain mutational hotspots associated with virulence (12,13). Considering the presumptive positive selective force on this region, SNPs within the region were not included in the final phylogenetic analysis. 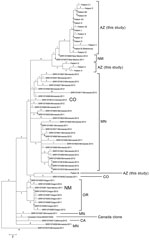 When compared with all other publicly available US emm59 isolate genomes, nearly all the genomes identified in the United States were closely related to each other and to the Canadian clone MGAS15252; individual isolate SNP branch lengths ranged from 0 to 10 (Figure 2). The Arizona outbreak isolates were separated from 2 New Mexico isolates by 4 and 5 SNPs each; these isolates fell within the overall Arizona clade and were subsequently included in the Arizona-only phylogenetic analysis (Figure 1). Conversley, the isolate from patient M appears more distant from the larger Arizona population. The Arizona clades, with the exception of that of the isolate from patient M, all appear to arise from the large Minnesota polytomy. The previously estimated 1.3–2.1 SNPs/year mutation rates for GAS (14,15) further support the Arizona outbreak as being caused by a single clone, likely originating from New Mexico and being spread over 6–12 months.

The emm59 subtype of GAS, the etiologic agent of a substantial nationwide outbreak of invasive GAS in Canada during 2006–2009 (4), is now present in Arizona, causing at least 1 outbreak of epidemiologically and genomically linked cases and several additional epidemiologically unrelated cases. The lack of emm59 in background isolates in Arizona from the previous decade, along with its low genetic diversity, suggests that emm59 emerged recently in Arizona. Following the emm59 epidemic in Canada, this subtype was subsequently seen in a few US states; a retrospective analyses of the Centers for Disease Control and Prevention Active Bacterial Core surveillance (ABCs) system (http://www.cdc.gov/abcs/reports-findings/survreports.pdf) identified 40 US emm59 isolates during 2000–2009 (6) and an additional 67 isolates during 2010–2012 (7). Of note, only 5 (of the 40 emm59 isolates from 2000–2009 (2 from Minnesota, 2 from California, and 1 from Oregon) appeared to be closely related to the Canadian clone (defined by the authors as being separated by <16 SNPs) (6); in contrast, all of the strains from the 2010–2012 survey appeared to be more closely related to the Canadian clone. The more recent ABCs analysis identified an increasing number of southwestern isolates, including 4 from Colorado and 6 from New Mexico (7), although no outbreaks were specifically described in these states (Arizona is not included in the ABCs system). Similar to this outbreak study, Olsen et al. (7), in an analysis of 60 MN emm59 isolates from case-patients with identified race, determined that 25 (42%) were from Native Americans; of 5 isolates from New Mexico in that study, 3 were from Native Americans.

Given the apparent distal nature of the Arizona/New Mexico isolates to the Minnesota population in our study, it is reasonable to propose an unidentified epidemiologic relationship between these case populations. However, caution must be used in drawing conclusions regarding the relationships of isolates from disparate geographic regions because only limited comparable sequence data from previous emm59 studies in the United States (7) were publicly available to compare to the Arizona isolates. Epidemiologic investigations, along with healthcare provider and patient education activities, are ongoing in Arizona to further determine the extent of the current outbreak and the associated risk factors and to help mitigate effects and limit or prevent further spread to at-risk populations.

Dr. Engelthaler is an associate professor with the Translational Genomics Research Institute in Flagstaff, AZ. His research interests are in advancing epidemiology and clinical response through applied infectious disease genomics.