During 2011–2013, a nationwide outbreak of chikungunya virus infection occurred in the Philippines. The Asian genotype was identified as the predominant genotype; sporadic cases of the East/Central/South African genotype were detected in Mindanao. Further monitoring is needed to define the transmission pattern of this virus in the Philippines.

Chikungunya fever is a mosquitoborne infection that causes large outbreaks mainly in tropical and subtropical countries. The causative agent is chikungunya virus (CHIKV), an enveloped, single-stranded positive-sense RNA virus (family Togaviridae, genus Alphavirus). Phylogenetic analysis of the E1 gene of CHIKV revealed 3 genotypes: West African, East/Central/South African (ECSA), and Asian (1). In 2005, large outbreaks occurred in the islands in the Indian Ocean and India that were caused by the Indian Ocean lineage (IOL) virus, which newly emerged from the ECSA genotype (2). More recently, the emergence and potential spread of ECSA and Asian genotypes in the Americas have been major public health concerns in the region. (3).

In the Philippines, CHIKV was first isolated in 1965 (4). Since then, sporadic cases have been reported, including those among US Peace Corps volunteers stationed in the islands of Mindanao, Cebu, and Masbate in 1986 (5), and a local community outbreak in Cavite, Luzon Island, was reported in 1996 (6). However, the first nationwide CHIKV outbreak was identified starting in 2011 (Philippines Department of Health, unpub. data). Previous studies of chikungunya fever in the Philippines focused on clinical and serologic analyses (7), and recent reports on the molecular surveillance of CHIKV in the country were limited and analyzed only samples collected in 2012 (8,9). We conducted genetic analysis to characterize recent CHIKV infections that caused a large nationwide outbreak in the Philippines during 2011–2013.

Serum samples were collected through the chikungunya fever surveillance under the Philippine Integrated Disease Surveillance and Response of the Department of Health Epidemiology Bureau from different provinces in the Philippines during 2011–2013. Samples were collected from patients suspected to have chikungunya fever manifesting with symptoms such as fever, rash, and arthralgia. Samples were sent to the Research Institute for Tropical Medicine, which serves as the National Reference Laboratory for Dengue and Other Arboviruses. We screened serum samples were screened by using CHIKV IgM-capture ELISA (NovaLisa, NovaTec Immundiagnostica GmbH, Dietzenbach, Germany). We extracted viral RNA using the QIAamp Viral RNA kit (QIAGEN, Hilden, Germany) according to the manufacturer’s instructions and amplified the partial E1 gene using 1-step reverse transcription PCR followed by direct Sanger sequencing with primers as previously described (10,11). We conducted phylogenetic analysis using the maximum-likelihood method as implemented in MEGA 6 software (http://www.megasoftware.net/). Molecular clock analysis and Bayes factor calculation were performed using BEAST software 1.8.0 (http://beast.bio.ed.ac.uk/) to select the best migration event model of CHIKV among countries. Bayes factor analysis was used to test phylogeographic hypothesis whether posterior migration rate between locations in whole evolutionary history was significantly higher than the expected prior migration rate, assuming truncated Poisson probability (12).

A total of 5,729 serum samples were collected from persons suspected to have chikungunya within 5 days after symptom onset. Fever, rash, and arthralgia were the most common symptoms (53%, 47%, and 34% of patients, respectively). Of the 5,729 serum samples, 2,891 were IgM positive by ELISA. We conducted reverse transcription PCR on 382 representative samples among IgM-negative patients in accordance with the CHIKV outbreak surveillance strategy of the Philippines, of which 131 samples tested positive. Partial E1 gene sequence (733 nt) was obtained from 31 samples. Sequences were submitted to GenBank (accession nos. LC064714–LC064744). 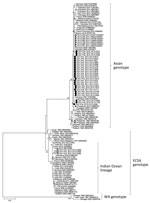 Figure 1. Phylogenetic analysis of partial (733 nt) E1 gene of 31 CHIKVs detected in the Philippines in this study during 2011–2013 compared with 77 global strains. The tree was constructed using maximum-likelihood... 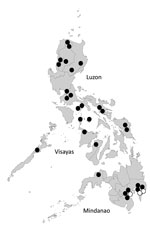 Figure 2. Geographic distribution of CHIKV genotypes in the Philippines. The location of samples collected in this study are indicated by circles; 1 circle represents 1 sample. Black circles indicate Asian genotype; white...

The 3 ECSA genotype viruses were detected in the Davao Del Sur and Davao Oriental in Mindanao Island in 2012 and 2013, and all were clustered into IOL (Figure 1,2). This finding indicates that the 2 genotypes co-circulated in the island during the outbreak. ECSA genotype viruses in the Philippines were closely related to the Indonesian viruses (GenBank accession no. KC862329) detected in 2010. Sequencing analysis showed that all Philippine ECSA viruses possess the alanine to valine substitution (A226V) in the E1 gene (Technical Appendix Tables 1, 2).

We also detected IOL of ECSA genotype, which possesses the E1-A226V substitution, and its co-circulation with the Asian genotype in the Philippines. However, the geographic distribution of ECSA genotype in 2012 and 2013 was limited to southern provinces in Mindanao. After the large outbreak in the Indian Ocean region in 2005, IOL of ECSA genotype rapidly spread to Asian countries and then co-circulated with the endemic Asian viruses, then eventually became the predominant genotype (13). However, this circulation pattern differs from what we observed in the Philippines. Until the early 2010s, most of the viruses circulating in the Philippines and Indonesia were still Asian genotype, and ECSA genotype viruses had been reported in West Kalimantan, Indonesia, in 2011 (14) and in the Philippines in 2012 several years after the large outbreak in the Indian Ocean region (2). The movement of persons near the border of these countries might play a key role in CHIKV transmission.

We have demonstrated that the Asian genotype CHIKV, which is closely related to the Indonesian viruses, was identified in Mindanao in 2011 and spread to other regions in 2012 and 2013. Like the Asian genotype, ECSA genotype virus was first detected in Mindanao in 2012. Mindanao might play a key role for the introduction of the CHIKV into the Philippines. Further monitoring is necessary to define the transmission pattern of CHIKV, including cross-border transmission.

Ms. Sy is a senior science research specialist and technical supervisor of the National Reference Laboratory for Dengue and Other Arboviruses, Virology Department, Research Institute for Tropical Medicine, Philippines. Her research interests include epidemiology and diagnosis of arboviral infections.

We thank the staff of the Epidemiology Bureau, Department of Health, Philippines, for the epidemiologic information about the samples. We also thank the staff of the Department of Virology and the Molecular Biology Laboratory, Research Institute for Tropical Medicine, Department of Health, Philippines, and staff of Tohoku–Research Institute for Tropical Medicine Collaborating Research Center on Emerging and Re-emerging Infectious Diseases for their excellent laboratory work.

This study was funded by the Epidemiology Bureau and the Disease Prevention and Control Bureau of the Department of Health, Philippines, and the Japan Initiative for Global Research Network for Infectious Diseases (J-GRID).