We investigated a dengue outbreak in Dar es Salaam, Tanzania, in 2014, that was caused by dengue virus (DENV) serotype 2. DENV infection was present in 101 (20.9%) of 483 patients. Patient age and location of residence were associated with infection. Seven (4.0%) of 176 patients were co-infected with malaria and DENV.

Data are scarce on seroprevalence of dengue virus (DENV) in Tanzania. Cross-sectional studies conducted during 2007–2014 indicated that DENV seroprevalence ranged from <2% to >50%, depending on geographic area and epidemiologic characteristics of patients (1–6). Aedes aegypti mosquitoes, the main vector of DENV, are present throughout Tanzania (7), and the clinical course of DENV infection is greatly affected by previous exposure to different DENV serotypes (8). Investigation of DENV outbreaks might serve to define circulation of different serotypes and the best strategy to manage future outbreaks.

In 2014, a large dengue outbreak occurred in Dar es Salaam, Tanzania (8). We report the main findings of a study conducted there during the outbreak. 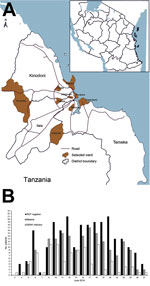 Figure 1. Geographic and clinical details of dengue outbreak, Dar es Salaam, Tanzania, 2014. A) Location of 3 districts investigated. *Districts with no health facility available during the study. Outpatient departments were not... 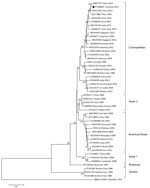 Virus RNA was extracted and 2 real-time reverse transcription PCRs (RT-PCRs), one specific for DENV serotypes 1, 2, and 3 and one for DENV serotype 4, were performed on dRDT-positive serum samples as described (10,11). For identification of DENV serotypes, a fragment spanning the E–NS1 gene junction was amplified as described (12). A complete envelope (E) gene sequence was obtained by using a One-Step RT-PCR Kit (QIAGEN, Hilden, Germany) and primers (primer sequences available on request). Sanger sequencing and phylogenetic analysis based on the nucleotide sequence of the E–NS1 region and a complete E gene sequence (Figure 2) were performed. A multiple logistic regression model with a backward procedure was used to determine a cutoff level of p = 0.10.

Sequence analysis of NS1–E junction gene fragments of DENV was performed for 8 randomly selected RT-PCR–positive samples (GenBank accession nos. KT288895–KT288902). Phylogenetic analysis of all sequences grouped them in a monophyletic cluster in the DENV serotype 2 cosmopolitan genotype. Further sequencing of the complete E gene was performed for 1 isolate (GenBank accession no. KT288902). Clustering with the DENV serotype 2 cosmopolitan genotype was confirmed (Figure 2). This analysis showed similarity of DENV in Tanzania with those from Asia isolated since 2001 and a strong phylogenetic relationship (99.8% identity) with a DENV variant isolated in Guangzhou, China, in 2013 (GenBank accession no. KJ807797).

We report DENV serotype 2 (Cosmopolitan genotype) as the causative agent of the dengue outbreak in Dar es Salaam in 2014. Sequence analysis showed that this virus from Tanzania had a strong phylogenetic relationship with virus strains from China, India, East Timor, and Singapore. These results indicate that the virus could have been recently introduced into Tanzania by travelers from Asia. This hypothesis is supported by the phylogenetic relationship with sequences obtained from isolates in Asia since 2001 and by reports of DENV-3 detection in the previous years in Zanzibar (4,5).

The incidence of DENV infection in Dar es Salaam (20.9%) is higher than incidences reported in recent studies of household participants in Angola (9% of recent infections) (13) and Kenya (13% of recent/current infections). This discordance might be related to different designs of these 2 studies. Our study was conducted with febrile patients attending health facilities and not in households. Moreover, the dRDT used in our study has a lower specificity than that of tests used in Angola and Kenya.

External validity of our results should be evaluated according to potential limitations of the study. First, the study used passive recruitment, which might have resulted in potential selection bias (only sicker patients who came to selected health facilities were analyzed). Second, the study had virtually no follow-up, which precluded any inferences about clinical outcomes of patients with severe dengue.

Despite these limitations, our study provides useful information on an underreported disease and on the molecular epidemiology of largest dengue outbreak reported in Tanzania. Results of our study can improve awareness of healthcare providers and demonstrate the feasibility of interventions to enhance diagnostic testing capabilities and specific surveillance systems. Resurgence of dengue in Tanzania should prompt implementation of population-based studies on differential diagnosis of acute febrile illness and surveillance systems based on syndromic approaches.

We thank the commissioners and medical officers of Ilala, Temeke, and Kinondoni Districts for their cooperation; the medical officers in charge of health facilities for providing technical and logistic support; the director general of the National Institute for Medical Research for providing permission to publish this article; the World Health Organization (Tanzania Country Office) for providing dengue rapid diagnostic tests; the National Health Laboratory Quality Assurance and Training Center for providing technical support for sample separation and storage; Carolyn Riwa, Serena Quartu, Paola Zaccaro, Maria Kelly, Solomon Mwakasungula, and Alfred Mwenda for processing and storing samples; and Alessandro Pandolfo, Onesmo Kateule, and Neema Camara for providing support during recruitment of patients and collection of samples at health facilities.