Borrelia miyamotoi is a newly recognized human pathogen in the relapsing fever group of spirochetes. We investigated a case of B. miyamotoi infection of the central nervous system resembling B. burgdorferi–induced Lyme neuroborreliosis and determined that this emergent agent of central nervous system infection can be diagnosed with existing methods.

The tickborne relapsing fever spirochete Borrelia miyamotoi was described in 1994 but only recently was recognized as a human pathogen (1). This spirochete is present in Ixodes ticks across the Northern Hemisphere, comparable to the distribution of B. burgdorferi sensu lato, but reported cases are still rare (2,3). Thus far, only 2 cases of central nervous system infection have been reported, both with a chronic course and both in immunocompromised persons (4,5). We investigated a case of B. miyamotoi infection that was initially diagnosed as seronegative early Lyme neuroborreliosis (LNB) that could be attributed to B. miyamotoi only by molecular–biological methods.

On July 31, 2015, a 74-year-old woman with a history of non-Hodgkin lymphoma (follicular type, stage IV) came to the Burgenlandkreis Hospital (Naumburg, Germany). She reported dizziness, vomiting, and a headache of 5 days’ duration. She had been treated for her lymphoma with cyclophosphamide, doxorubicin, vincristine, and prednisone with rituximab during May–August 2012. Thereafter, she received rituximab maintenance therapy (375 mg/m2 every 8 weeks) until November 2014. The monoclonal antibody rituximab that targets the CD20 antigen expressed by B cells leads to anti-CD20–mediated B cell depletion. This treatment, together with the underlying hematologic disease, resulted in an immunocompromised condition. The patient reported 2 tick bites while in Elsteraue municipality (Saxony-Anhalt, Germany) during June and July 2015 but had no recent travel history. On examination, she had slight neck stiffness but no other notable findings.

A lumbar puncture was performed to assess the patient for viral or lymphomatous meningitis. Cerebrospinal fluid (CSF) showed a pleocytosis of 70 leukocytes/μL (reference 0–5 leukocytes/μL) and elevated protein at 1,718 mg/L (reference 150–400 mg/L); albumin quotient (Qalb) 34.8% (reference <9%), lactate 5.58 mmol/L (1.2–2.1 mmo/L), and glucose quotient 0.45 (>0.5); and an intrathecal IgM synthesis of 18%. The greatly elevated lactate and highly increased Qalb and protein made a viral cause unlikely. Pappenheim staining of a cytospin preparation of CSF revealed a mixed cell population (32% polymorphonuclear leukocytes, 61% lymphocytes, and 7% monocytes) with heterogeneous morphology of lymphocytes that did not suggest lymphomatous meningitis. Serum and CSF were negative for B. burgdorferi–specific antibodies by the chemiluminescent immunoassay LIASON (DiaSorin, Vercelli, Italy). However, because the CSF constellation was typical for LNB, including the slight intrathecal IgM synthesis (6), the patient was treated with 2 intravenous ceftriaxone (2,000 mg 1×/d for 3 wks).

To exclude early tuberculous meningitis, we examined the CSF for mycobacteria by PCR, culture, and staining. To further substantiate the LNB diagnosis, we determined the B-cell attractant chemokine CXCL13 from CSF. The measured value of 1,155 pg/mL was clearly higher than the minimum concentration of 250 pg/mL, indicating neuroborreliosis and thus supporting our working diagnosis of LNB (7). After 5 days of treatment, the patient recovered fully. A second lumbar puncture after 7 days of treatment revealed a stable count of 76 monomorphic lymphocytes/μL. In addition, protein, Qalb, and CXCL13 had decreased (Table). However, we remained unable to detect B. burgdorferi–specific antibodies in serum or CSF, and B. burgdorferi–specific PCR of the first CSF specimen showed no amplification product.

To conclusively identify the pathogen, we tested the first CSF and serum samples by PCR for panbacterial 16S rRNA, with a positive result from CSF only. Using the BLAST algorithm (http://blast.ncbi.nlm.nih.gov/Blast.cgi) in GenBank, we found, to our surprise, that the sequence was identical to that for B. miyamotoi. Moreover, sequences of 16S rRNA, flaB, and 6 housekeeping genes revealed the European type of B. miyamotoi (Figure 1; details of molecular phylogenetic analysis and GenBank accession numbers in Technical Appendix). 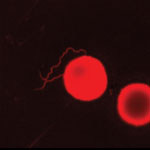 The genus Borrelia is divided into 2 groups: B. burgdorferi sensu lato, which causes Lyme disease, and a group of species that cause relapsing fever. B. miyamotoi belongs to the second group and was first described in 2011 as a human pathogen in several patients from Russia who had an unspecific febrile illness where few patients experienced febrile relapses, which is the typical sign for relapsing fever (1). B. miyamotoi was also reported to have caused meningoencephalitis in a patient from New Jersey, USA (4), and a patient from the Netherlands (5). As with the patient we report, these patients had a history of non-Hodgkin lymphoma with recent rituximab treatment. Because of the increasing indications for rituximab treatment (8) and a prevalence of B. miyamotoi in Ixodes ricinus ticks in Europe of up to 3.2% (2), clinicians should be aware that cases of B. miyamotoi neuroborreliosis may increase (4).

Detection of specific antibodies is a useful complementary diagnostic method. Only recently it was shown that assays based on the GlpQ protein, which is present in relapsing fever Borrelia but absent in B. burgdorferi sensu lato, might be useful in diagnosing B. miyamotoi infection (2,3). Moreover, up to 90% of PCR-confirmed B. miyamotoi infections were positive in a B. burgdorferi enzyme immunoassay, although only a few by 2-tiered testing (reviewed in 3). For the case we report, we had no access to a GlpQ assay, and the standard serologic tests for Lyme borreliosis were negative, as it was for the 2 published reports (4,5). However, a clinician relies on combining history, clinical examination, and routine CSF analyses. Clinicians should therefore be aware of possible B. miyamotoi neuroborreliosis, especially in patients who have a history of non-Hodgkin lymphoma and recent rituximab treatment. The clinical picture seems to be unspecific. Although the patient we report had acute symptoms (dizziness, vomiting, and headache) of short duration, the other published cases had decline in mental status (slow cognitive processing, memory deficits), and disturbed gait developing gradually over several months. All 3 B. miyamotoi cases had CSF pleocytosis with elevated CSF protein concordant with CSF changes found in LNB (Table). We even found slight intrathecal IgM synthesis, as is seen in 70% of patients with LNB (6). However, a viral cause must be excluded, especially when CSF protein is only slightly elevated.

In recent years, CXCL13 has been identified as a potentially sensitive and specific biomarker for diagnosing acute LNB. It was a useful indicator in our investigation and might be a suitable indicator for diseases caused by spirochetes in general, as was already shown for B. burgdorferi and Treponema pallidum (7). Furthermore, the amounts of this chemokine might be used to assess the success of therapy because it declined rapidly in the patient we report after therapy began (Table). In contrast to the lack of sensitivity of culture and PCR for detecting B. burgdorferi in CSF, B. miyamotoi, as a member of the relapsing fever spirochete group, was detectable by microscopy and by PCR in the CSF in this patient, as well as in the 2 previously reported (4,5). Darkfield microscopy or staining with acridine orange might be required to increase sensitivity. In all 3 cases, PCR targeting the panbacterial 16S rRNA followed by sequencing showed the causative species. Our report of B. miyamotoi infection in a patient from Germany indicates that this emergent agent of central nervous system infection can be diagnosed by using existing methods if clinicians are aware of it.

Dr. Boden is a physician at the University Hospital Jena and specializes in clinical chemistry, laboratory medicine, and medical microbiology. Her research interests include infectious diseases of the central nervous system and zoonotic pathogens.

We thank Christian Schmeer for his technical support concerning microscopy of the acridine orange slide and Clara Lettl and Cecilia Hizo-Teufel for excellent technical assistance.

S.L. managed the patient. K.B., B.H., and V.F. were involved in the diagnostic testing. G.M. performed the molecular biological investigations. All authors contributed to writing the article.