We identified Usutu virus (USUV) RNA in 6 pools of mosquitoes trapped in northern Israel during 2014–2015. These Israeli strains were most similar to strains identified in Senegal and Germany, which further elucidates common ancestry and evolutionary dynamics of USUV. Our findings suggest that human infection with USUV might occur in Israel.

Usutu virus (USUV) is a vectorborne flavivirus first isolated in South Africa in 1959 (1). The reservoirs for USUV, which are similar to those for West Nile virus (WNV), include numerous species of birds, and it is transmitted primarily by Culex spp. mosquitoes (2). Circulation of USUV has been reported in several countries in Africa, and 2 human cases of infection were identified in Africa in 1981 and 2004 (3). Since 1996, when USUV was first detected outside Africa in a blackbird in Italy, the virus has been identified in mosquitoes and birds in several countries in Europe (4). In recent years, there has been increasing evidence for human infection with USUV (4), and USUV antibodies and USUV RNA have been detected in blood donors (5,6).

A study published in 2016 characterized USUV phylogeny on the basis of available USUV strains from Africa and Europe (7). This study suggested that multiple introductions of USUV into central Europe from Africa could be confirmed and that Senegal was a possible origin for epizootics in central Europe.

WNV is the only flavivirus detected in Israel. WNV circulates in mosquitoes and birds in this country and was responsible for ≈1,400 cases of human infections during 2000–2012 (8). Because Israel is located on a central bird migration path between Africa and Eurasia (9), circulation of USUV in this area is also plausible. We used the WNV national mosquito surveillance system in Israel as a source for identification of USUV strains circulating in mosquitoes in Israel during 2014–2015. 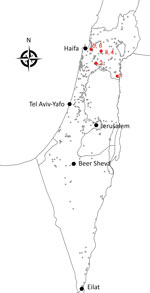 During 2014–2015, a total of 53,890 mosquitoes were trapped and grouped into 1,471 pools of <50 mosquitoes/pool. We tested RNA extracted from mosquito pools for USUV RNA by using quantitative reverse transcription PCR and specific primer–probe sets for the USUV nonstructural protein 5 (NS5) gene as described (10). We detected USUV RNA in 6 pools, 5 from 2015 and 1 from 2014. Although mosquito specimens were collected from trapping sites throughout Israel, all USUV RNA–positive pools were captured in northern Israel (Figure 1) and belonged to 3 mosquito species (Table). 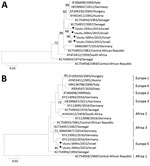 We then performed amplification of an 845-nt sequence containing part of the envelope, membrane, and premembrane genes of USUV as described (11). Phylogenetic analysis showed that sequenced USUV strains from Israel clustered with a USUV strain isolated from Cx. neavei mosquitoes in 2007 in Senegal (Figure 2, panel A).

We then performed phylogenetic analysis of part of the NS5 gene because a previous study showed that this sequence exhibits a phylogenetic signal similar to the complete genome (7), which enables rapid characterization of circulating virus strains. Results (Figure 2, panel B) showed that USUV sequences from Israel closely resemble sequences of a USUV strain isolated from a bird in Germany in 2016, which was recently shown to belong to a putative novel USUV lineage called Europe 5 (11).

Despite its identification in 1959, USUV was not considered a potential public health concern until the early 2000s, when the first large USUV outbreak in birds occurred in Austria (10). Since that time, several human cases were identified in Europe and showed a correlation with increasing numbers of birds infected with USUV (4). It is possible that, similar to WNV outbreaks in Europe, the United States, and Israel during 1990–2010, which were occasionally preceded by large numbers of WNV infections in birds (12), USUV detection in birds and mosquitoes might be the first indication of future USUV outbreaks in humans. In this study, we identified that USUV RNA is present in mosquitoes in Israel, which suggested that USUV infection in humans might also occur in Israel.

Recently, reconstruction of the evolutionary history and dispersal of USUV has identified 6 distinct lineages of USUV. Nevertheless, Engel et al. concluded that limited numbers of USUV isolates from Africa and lack of data for countries located between Africa and Europe might obscure additional spatial movements (7).

Our phylogenetic analysis of the NS5 gene (Table) showed that USUV strains detected in Israel belong to the USUV Europe 5 lineage, mostly resembling a strain isolated in Germany in 2016. However, phylogenetic analysis on the basis of part of USUV structural proteins (Figure 1) indicates that virus strains from Israel are similar to USUV isolated from mosquitoes in Senegal in 2007, which was shown to be part of the Africa 3 lineage (11).

Because Israel is located on a bird migration path between Africa and Eurasia, USUV strains isolated in Germany, which are part of the Europe 5 and Africa 3 lineages, might have arrived from Africa through Israel, thus explaining the relative similarity of the strains in Israel to both lineages. Identification of more isolates from the Middle East and in-depth sequence analysis are needed to examine the geographic spread of the virus and further decipher its evolutionary history.

Given the history of flaviviruses that were responsible for major outbreaks worldwide after decades of silent circulation, such as WNV and Zika virus, the accumulating evidence of increased activity of USUV in Europe is alarming. Therefore, investigation of USUV in mosquitoes in Israel is essential, not only because of public health concerns but also because of a need to understand the kinetics and penetration routes of USUV from Africa into Europe, Asia, and the Middle East.

Dr. Mannasse is a researcher at the National Zoonotic Viruses Reference Laboratory at the Ministry of Health, Tel Hashomer, Israel. Her research interests include clinical virology and phylogeny of arboviral diseases.