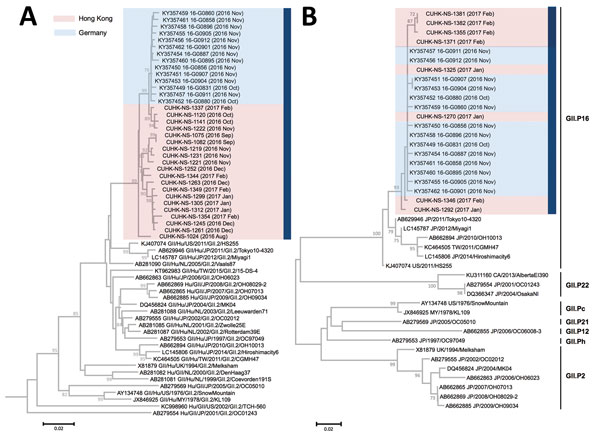 Figure 2. Neighbor-joining phylogenetic analysis of partial A) VP1 (1,322 nt) and B) RdRp (235 nt) gene sequences of norovirus genogroup II genotype 2 (GII.2) detected by molecular surveillance at a teaching hospital, Hong Kong, China, July 2016–February 2017. The trees were constructed by using Kimura-2-parameter distance method with 1,000 bootstrap replicates. Bootstrap values >70 (percentage) are shown at nodes. Blue bar indicates winter of 2016–2017. Pink shading denotes sequences obtained in this study. Blue shading denotes sequences from Germany during the same period. Year and month of strain collection are shown in parentheses. The VP1 tree is rooted to a genotype GII.5 strain (GII/Hu/GF/1978/GII.5/C15) (not shown), and the RdRp tree is mid-point rooted. Sequences shown in the RdRp tree were obtained from dual-typing of 8 single amplicons. All RdRp genotypes known to recombine with GII.2 VP1 are included in the RdRp tree. Scale bars are drawn to scale and indicate numbers of nucleotide substitutions per site. RdRp, RNA dependent RNA polymerase; VP1, viral protein 1.