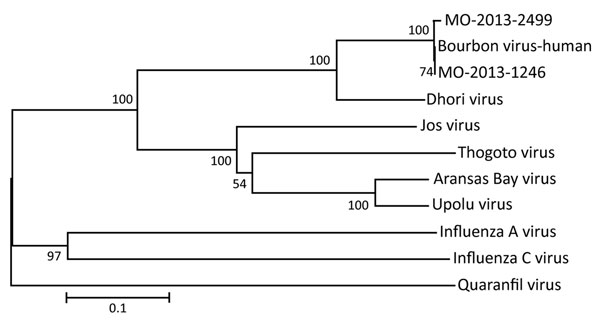 Figure 2. Phylogenetic analyses of partial basic 2 sequences of selected orthomyxoviruses. Bourbon virus sequences from 2 pools of Amblyomma americanum ticks (male adults, MO-2013-1246; nymphs, MO-2013-2499) collected in Missouri, USA, during 2013 grouped with the sequence of the original Bourbon virus isolated from a man who died in Bourbon County, Kansas, USA, during 2014. The evolutionary history was inferred using the neighbor-joining method with 2,000 replicates for bootstrap testing. The tree is drawn to scale, with branch lengths in the same units as those of the evolutionary distances used to infer the phylogenetic tree. The evolutionary distances were computed using the Poisson correction method. Scale bar indicates number of amino acid substitutions per site.