In support of improving patient care, this activity has been planned and implemented by Medscape, LLC and Emerging Infectious Diseases. Medscape, LLC is jointly accredited by the Accreditation Council for Continuing Medical Education (ACCME), the Accreditation Council for Pharmacy Education (ACPE), and the American Nurses Credentialing Center (ANCC), to provide continuing education for the healthcare team.

Medscape, LLC designates this Journal-based CME activity for a maximum of 1.00 AMA PRA Category 1 Credit(s)™. Physicians should claim only the credit commensurate with the extent of their participation in the activity.

All other clinicians completing this activity will be issued a certificate of participation. To participate in this journal CME activity: (1) review the learning objectives and author disclosures; (2) study the education content; (3) take the post-test with a 75% minimum passing score and complete the evaluation at http://www.medscape.org/journal/eid; and (4) view/print certificate.

Upon completion of this activity, participants will be able to:

•     Evaluate clinical features of cases of typhus group rickettsiosis (TGR) at a large, Houston-area pediatric hospital between 2008 and 2016, based on a retrospective medical record review

•     Compare epidemiological features of cases of TGR at a large, Houston-area pediatric hospital between 2008 and 2016, based on a retrospective medical record review

•     Assess the public health implications of cases of TGR at a large, Houston-area pediatric hospital between 2008 and 2016, based on a retrospective medical record review

An increase in typhus group rickettsiosis and an expanding geographic range occurred in Texas, USA, over a decade. Because this illness commonly affects children, we retrospectively examined medical records from 2008–2016 at a large Houston-area pediatric hospital and identified 36 cases. The earliest known cases were diagnosed in 2011.

Typhus group rickettsiosis (TGR) is a vectorborne zoonotic disease most commonly caused by the bacteria Rickettsia typhi, the etiologic agent of murine typhus. Since 2003, the annual incidence of TGR cases in Texas has increased and expanded geographically (1). Recently, a study conducted in Galveston County found that 7 of 18 persons with acute fever were positive for R. typhi (2). In the Houston/Harris County metropolitan area, which is adjacent to Galveston County, TGR was first reported to the Texas Department of State Health Services (TXDSHS) in 2007 (1). By 2013, 27 cases had been reported to the state. Because the highest attack rate occurs in children 5–19 years of age, we became concerned that children with possible R. typhi infection were brought to Texas Children’s Hospital (TCH), a large, 692-bed pediatric hospital system in Houston. To evaluate this recent emergence, we retrospectively searched the hospital diagnostic testing database to identify all TGR-positive patients.

When searching diagnostic laboratory orders for rickettsial IFA, we identified 425 test submissions. On the basis of diagnostic results and clinical compatibility, we identified 36 TGR cases: 18 confirmed, 13 probable, and 5 suspected cases. One case was additionally confirmed R. typhi–positive by PCR at the Centers for Disease Control and Prevention (Atlanta, GA, USA). Only 3 case-patients had convalescent specimens collected, and each yielded >4-fold increase in titer, thereby confirming infection.

Upon review of the medical records, nearly all case-patients (35/36; 97%) were febrile when they sought care (median temperature 103°F) (Table). Eleven (31%) case-patients had the classical triad for typhus of fever, rash, and headache. Other common symptoms included malaise, vomiting, anorexia, abdominal pain, lymphadenopathy, and conjunctivitis. Approximately one fifth had hepatosplenomegaly noted on physical exam. Most case-patients also had elevated transaminases (86%) and thrombocytopenia (61%). A median of 8 days elapsed between symptom onset and arrival at the hospital for medical care and 13 days from symptom onset to defervescence. Whereas the median time from symptom onset to initiation of treatment was 12 days, the median time from initiation of doxycycline treatment to defervescence was only 1 day.

Most case-patients (30/36; 83%) were admitted for hospitalization, with a median length of stay of 5 days. Of those, 7 (19%) required intensive care due to severity of illness. Hispanic patients were significantly more likely to be admitted to the pediatric intensive care unit (86% of these patients were Hispanic; odds ratio 12.7, 95% CI 1.2–612.3; p = 0.027 by 2-tailed Fisher exact test). No deaths occurred. 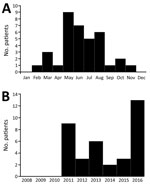 Figure 2. Spatial distribution of Rickettsia typhi–positive pediatric case-patients with no history of travel by location of residence around the Houston/Harris County, Texas, USA, metropolitan region.

Thirty (83%) case-patients resided in the Houston metropolitan area; cases were geographically clustered in western Houston (Figure 2). Of these case-patients, 26 (72%) had no history of travel. Three cases were within 70 miles of the Louisiana border. In Louisiana, TGRs are not reportable diseases (4).

Recently, we demonstrated evidence of TGR reemergence into new geographic areas of Texas, including Houston/Harris County, the third most populated county in the United States (1). Here we present the clinical findings of pediatric patients with TGRs in the Houston metropolitan area, starting in 2011. To track this evidence of emergence, it is critical to raise clinical awareness and encourage testing, diagnosis, and public health reporting of new cases.

Rickettsial infections are reportable in Texas, with cases passively reported by medical care providers. In working with TXDSHS, we cross-referenced our patient list with the public health surveillance database and found only 15 (48%) of the 31 confirmed or probable cases were reported, highlighting a critical gap in passive surveillance. Reporting did improve over time, with 71% (10/14) of 2015–2016 cases reported to TXDSHS, compared with only 29% (5/17) of 2011–2014 cases. Barriers to reporting could be related to low awareness of reporting requirements, complexity of patient care, and the inherent delays in receiving testing results, typically after discharge. Public health surveillance is critical for disease tracking, prevention, and control efforts; therefore, further work is needed to optimize public health reporting of rickettsial infections.

Approximately one third of the pediatric TGR cases we report exhibited the classic triad of fever, headache, and rash, which is considered the hallmark of R. typhi infection. Another pediatric study also reported similar findings (5). The severity of illness in our patients was remarkable, with 1 in 5 patients requiring intensive care. Early clinical suspicion, diagnosis, and appropriate treatment of suspected rickettsial infections is critical to shorten the duration of illness and prevent serious, life-threatening outcomes.

Our study documents the identification and clinical description of pediatric cases of TGRs in the Houston area. While we believe TGR is emerging locally, it is plausible that prior cases simply went undetected and undiagnosed. A study conducted in 2004 found that 10% of homeless persons in Houston tested seropositive for R. typhi (6). That study looked only at past exposure, however, so we do not know where those persons acquired the infection. Because studies are lacking in this region regarding the specific reservoirs and vectors responsible for transmission, establishing research in this area is critical.

The recent emergence of TGRs in Houston poses a public health threat. Our report provides insight into the presentation and epidemiology of disease in a pediatric population. It is still unknown what factors put these children at risk for infection. The sylvatic and domestic transmission cycles of R. typhi, including vectors and mammalian reservoirs, require further investigation. Improved physician awareness through reporting of clinical studies and case series will assist in appropriate diagnosis and management of disease throughout Texas and the southern United States.

Mr. Erickson is a doctoral student in epidemiology at the University of Texas Health Science Center at Houston, School of Public Health. He received his MSPH in public health from Texas A&M University. His research interests include the epidemiology of infectious diseases, particularly rickettsial diseases.

We thank Bonny Mayes for assisting with cross-referencing our cases with the state surveillance database.

This study was reviewed and approved by the Baylor College of Medicine Institutional Review Board (H-34878).

To obtain credit, you should first read the journal article. After reading the article, you should be able to answer the following, related, multiple-choice questions. To complete the questions (with a minimum 75% passing score) and earn continuing medical education (CME) credit, please go to http://www.medscape.org/journal/eid. Credit cannot be obtained for tests completed on paper, although you may use the worksheet below to keep a record of your answers.

Only one answer is correct for each question. Once you successfully answer all post-test questions, you will be able to view and/or print your certificate. For questions regarding this activity, contact the accredited provider, CME@medscape.net. For technical assistance, contact CME@medscape.net. American Medical Association’s Physician’s Recognition Award (AMA PRA) credits are accepted in the US as evidence of participation in CME activities. For further information on this award, please go to https://www.ama-assn.org. The AMA has determined that physicians not licensed in the US who participate in this CME activity are eligible for AMA PRA Category 1 Credits™. Through agreements that the AMA has made with agencies in some countries, AMA PRA credit may be acceptable as evidence of participation in CME activities. If you are not licensed in the US, please complete the questions online, print the AMA PRA CME credit certificate, and present it to your national medical association for review.

1.   Your patient is a 10-year-old boy with suspected typhus group rickettsiosis (TGR). On the basis of the retrospective medical record review by Erickson and colleagues, which one of the following statements about clinical features of cases of TGR at a large, Houston-area pediatric hospital between 2008 and 2016 is correct?

A. About three quarters of patients had the "classical triad" of fever, rash, and headache

B. Malaise, vomiting, anorexia, abdominal pain, lymphadenopathy, and conjunctivitis were other common symptoms

C. Elevated transaminases and thrombocytopenia occurred in less than half of patients

2.   According to the retrospective medical record review by Erickson and colleagues, which one of the following statements about epidemiological features of cases of TGR at a large, Houston-area pediatric hospital between 2008 and 2016 is correct?

A. Half of case-patients had documented animal exposures

B. The highest number of diagnosed cases occurred in 2012

C. Most case-patients had a history of recent travel

D. Most cases presented during summer months, when fleas are most prevalent

3.   According to the retrospective medical record review by Dr. Erickson and colleagues, which one of the following statements about public health implications of cases of TGR at a large, Houston-area pediatric hospital between 2008 and 2016 is correct?

A. The study proves that exposure to domestic pets puts children at risk for infection

B. More than three quarters of confirmed or probable cases identified in this series were reported

C. Barriers to reporting may include low awareness of reporting requirements, complexity of patient care, and delays in receiving test results, especially after discharge

D. Suspicion for TGR need not be high if the classical triad of fever, rash, and headache is absent