We report a fatal case of disseminated Emmonsia sp. infection in a 55-year-old man who received an orthotopic liver transplant. The patient had pneumonia and fungemia, and multisystem organ failure developed. As human habitats and the number of immunocompromised patients increase, physicians must be aware of this emerging fungal infection.

Emmonsia species are ubiquitous, soil-dwelling saprophytic fungi. Two species, E. crescens and E. parva, cause pulmonary disease (adiaspiromycosis) in rodents and other small animals. After inhalation, the conidia (adiaspores) grow without replication or dissemination and can cause pulmonary granulomas. Human cases are rare and usually occur in immunocompetent hosts (1,2). However, disseminated infections caused by E. pasteuriana–like species have been reported primarily in HIV-infected patients in South Africa (3,4). A recent review implicated novel Emmonsia spp.–like fungi as emerging agents of disseminated infection (1). We report a case of fatal disseminated infection after orthotopic liver transplantation caused by a novel Emmonsia sp.

A 55-year-old man received an orthotopic liver transplant because of alcoholic cirrhosis. He was discharged on posttransplant day (PTD) 7 after an unremarkable posttransplant course. Immunosuppression included induction with rabbit antithymocyte globulin and tacrolimus. He did not receive antifungal prophylaxis. 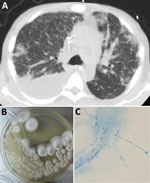 On PTD 32, after the patient had a fever (temperature 101.5°F), repeat chest CT showed enlargement of the right pleural effusion. A pigtail catheter was inserted, and pleural fluid cultures again grew a mold. Sputum culture yielded normal flora. Three of 4 blood cultures collected on PTD 33 and 1 of 4 blood cultures collected on PTD 36 grew the same mold. The patient was given voriconazole, but treatment was changed to liposomal amphotericin B because of worsening liver function and delirium.

Despite aggressive antifungal therapy, broad-spectrum antimicrobial drugs, and reduction of immunosuppression, multisystem organ failure developed, requiring inotropic support, hemodialysis, and mechanical ventilation. The patient died on PTD 46. No autopsy was performed. The patient owned a snake farm in rural northern California and trapped small mammals to feed his snakes and practice taxidermy. He stopped these activities 1–2 years before receiving the transplant.

A literature review of human Emmonsia infections is challenging because these organisms have undergone multiple taxonomic revisions (2). Most reports of adiaspiromycosis base the diagnosis solely on the appearance of adiaspores in histopathologic specimens (5,6), and some published Emmonsia cases might have misidentified the causative organism (1).

Disseminated Emmonsia infection appears to be a separate clinical entity from adiaspiromycosis (1). Human adiaspiromycosis is primarily a self-limited pulmonary infection caused by E. crescens, which is not associated with immunosuppression or fungemia. Disseminated Emmonsia infection is caused by a novel cluster of Emmonsia-like species (1); involves fungemia; appears to be associated with immunosuppression, including renal transplant (7–9) and orthotopic liver transplantation and HIV (10); and has a high case-fatality rate.

The timing of this infection raised concern for a donor-derived infection. However, we confirmed with the United Network for Organ Sharing (https://www.unos.org/) that no other organ recipients from the same donor had a similar posttransplant infection. Reported soil and rodent exposure for the patient and previous granulomatous disease identified by pretransplant chest imaging raised the possibility that his infection was a reactivation of a latent infection.

The unfamiliar mold isolated from the patient’s pleural fluid was initially identified as a contaminant, and the patient died despite favorable in vitro antifungal susceptibilities. In immunosuppressed patients with a compatible clinical syndrome, fungi isolated from a sterile site should be identified. More cases of Emmonsia-like infections will probably be diagnosed as laboratories use sequencing to identify uncommon fungal pathogens.