Zika virus is a mosquito-borne flavivirus transmitted primarily through the bite of infected Aedes spp.mosquitoes. Transmission can also occur through occupational laboratory exposure and by intrauterine, intrapartum, or sexual routes (1–3).

In May 2015, Zika virus disease cases were identified in Brazil, representing the first local transmission in the Americas (4). Subsequently, Zika virus spread rapidly, resulting in >463,000 suspected and laboratory-confirmed cases in the Americas as of June 30, 2016 (5). This rapid expansion highlighted key knowledge gaps, including incubation period. Characterizing the incubation period for Zika virus is needed for defining periods of risk and identifying local virus transmission. To estimate the incubation period, we used data from symptomatic persons who had traveled to an area with ongoing Zika virus transmission and for whom laboratory evidence indicated recent infection.

We included in our analysis persons for whom samples tested at the Centers for Disease Control and Prevention from January 1, 2015, through June 23, 2016, gave positive results, indicating recent Zika virus infection (defined as Zika virus RNA positivity by real-time reverse transcription or Zika or dengue virus positivity by IgM capture ELISA and confirmed by plaque reduction neutralization test with a Zika virus–specific neutralizing antibody titer >10 and Zika virus titer >4-fold higher than dengue virus titer) (6,7). We restricted our analysis to persons who were symptomatic, had known symptom onset date (onset of first symptom), had known travel dates from/to the continental United States, and were probably infected through a mosquito bite. We excluded from analysis those for whom disease was congenital or sexually transmitted and those reporting illness onset >2 months after travel (because of the typically shorter incubation periods for other flavivirus diseases). 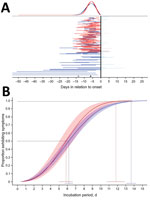 Figure 1. Estimated distribution of incubation period in days since infection for persons with evidence of recent Zika virus disease. A) Representation of individual interval censored travel data based on time of exposure...

To estimate the incubation period distribution, we first defined the exposure period as either the duration of travel if a person experienced illness after return from travel or the time from beginning of travel to the onset of illness if the traveler became ill during travel (Figure 1, panel A). We then fit various probability distributions in R (https://cran.r-project.org/) by using the dic.fit function in the coarseDataTools package, which uses methods detailed by Reich et al. (8). We selected the best model by using the Akaike information criterion. In addition to reporting fitted cumulative distribution function and associated 95% CIs, we reported certain quantiles and means. All analyses were conducted by using R.

For our primary analysis, we used all persons with evidence of a recent Zika virus infection (primary case set). We then performed a secondary analysis of persons with confirmed Zika virus infection and <2 weeks of travel (secondary case set), enabling evaluation of our estimates by using more stringent case definition requirements. A confirmed case of Zika virus disease was illness in a symptomatic person with a sample that was either Zika virus RNA positive or Zika or dengue virus IgM positive with neutralizing antibodies against Zika virus only. 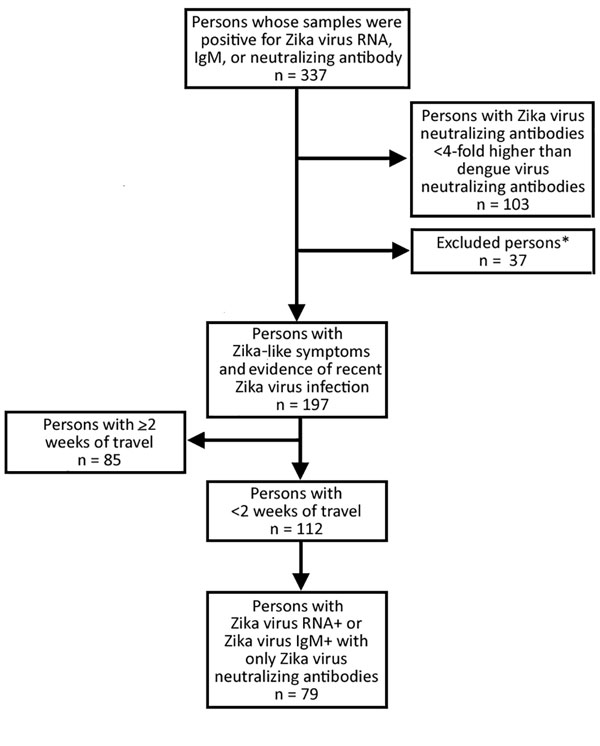 On the basis of our analysis, we estimate that the incubation period for Zika virus is 3–14 days. We expect symptoms to develop within 1 week of infection for 50% and within 2 weeks for 99%. Our estimates for Zika virus incubation period are similar to those reported for other flaviviruses (9–12). The incubation period for Zika virus has been estimated by Lessler et al., who reported data from 25 patients with variable exposure and laboratory evidence of infection (13). Their estimated median incubation period was similar to ours, 5.9 days, but the upper limit from that study was 18 days, which is 6 and 7 days longer than our estimates for the primary and secondary case sets, respectively. The difference in the upper limit was probably the result of the lower number of cases and higher variability in travel durations for their cohort.

Our analysis has several limitations. First, samples were submitted to the Centers for Disease Control and Prevention for all patients in this analysis, although guidance for testing recommended testing only persons with symptom onset <2 weeks after travel (14). Testing of all patients could have biased our sample population. Second, we included persons who were Zika virus IgM positive, considered as having recent infection. However, because the duration of IgM after Zika virus infection is not known, we might have included persons who had a prior infection unrelated to their most recent travel. Third, our analysis does not include other modes of transmission, such as sexual or congenital, for which incubation periods might differ. Fourth, we cannot be sure that all cases included in the analysis were caused by vector transmission because sexual transmission may have occurred during travel. Similarly, our primary case set included 11 pregnant women. Data suggest that the immunologic response to Zika virus infection might differ during pregnancy (15); however, in our analysis, the incubation periods of the pregnant women did not differ qualitatively from those of nonpregnant travelers.

According to our analysis, among Zika virus–infected travelers who will become symptomatic, 99% will experience symptoms within 2 weeks of exposure and 50% within 1 week. Persons for whom symptoms develop >2 weeks after travel and test results for a recent Zika virus infection are positive should be evaluated for alternative modes of transmission (e.g., sexual transmission) or local vectorborne transmission.

We thank the Zika Virus Response Epidemiology and Laboratory Teams and vectorborne disease surveillance coordinators in state and local health departments for their efforts with collection and sharing of data used in this analysis.