During March–July 2014, rotavirus G8P[8] emerged as the predominant cause of rotavirus gastroenteritis among children in Hokkaido Prefecture, Japan. Clinical characteristics were similar for infections caused by G8 and non-G8 strains. Sequence and phylogenetic analyses suggest the strains were generated by multiple reassortment events between DS-1–like P[8] strains and bovine strains from Asia.

Rotaviruses, the leading cause of acute gastroenteritis in children worldwide, are classified into G and P genotypes on the basis of 2 outer capsid proteins, viral protein (VP) 7 and VP4. A recently established extended rotavirus genotyping system based on the sequence of all 11 genome segments (1) grouped most human rotaviruses into 2 genotype constellations: Wa-like (G1/3/4/9-P[8]-I1-R1-C1-M1-A1-N1-T1-E1-H1) and DS-1–like (G2-P[4]-I2-R2-C2-M2-A2-N2-T2-E2-H2) strains.

In industrialized countries, rotavirus genotype G8 infection is common in bovines but rarely occurs in humans; however, the G8 strains are highly prevalent among humans in some countries in Africa (2). We investigated the clinical and molecular features of G8P[8] rotavirus, which, we unexpectedly found to be the predominant genotype in southwestern Hokkaido Prefecture, Japan, in 2014.

Figure 1. Distribution of rotavirus samples and their G/P genotypes in Hokkaido Prefecture (center map), Japan, 2014. The 4 locations from which the fecal samples were collected are shown on the map. Four...

During March–July 2014, we obtained rotavirus-positive fecal samples from 165 children in Hokkaido with acute gastroenteritis. The children were receiving care as inpatients or outpatients at 1 of 6 medical facilities (4 hospitals and 2 clinics) in the cities of Sapporo, Tomakomai, Muroran, and Urakawa (Figure 1).

For each fecal sample, we prepared a 10% fecal suspension, from which we extracted viral RNA. We performed reverse transcription PCR on the RNA by using the SuperScript II Reverse Transcriptase (Invitrogen, Carlsbad, CA, USA); PrimeSTAR GXL DNA polymerase (Takara, Shiga, Japan); and previously described primers (3,4). We used the BigDye Terminator v.3.1 Cycle Sequencing Reaction Kit (Applied Biosystems, Foster City, CA, USA) to sequence PCR amplicons. For some of the rotavirus samples, next-generation sequencing was performed at the National Institute of Infectious Diseases in Tokyo, Japan, as described previously (5). Sequences of the rotaviruses used in this study were submitted to the DDBJ under accession numbers LC102884–LC103134 and LC105000–LC105532.

We obtained clinical data for all 84 patients who sought care at the hospital or clinic in Tomakomai. Demographic and clinical characteristics (e.g., age, sex, history of rotavirus vaccination, duration of fever, and duration and frequency of diarrhea and vomiting) were not substantially different between 42 patients with G8P[8] rotavirus infection and 42 patients with non-G8P[8] rotavirus infection. The proportion of patients admitted to hospitals was also similar in the 2 groups (Table 1).

We selected 15 G8P[8] strains for whole-genome analysis. All strains had the same genotype constellation, G8-P[8]-I2-R2-C2-M2-A2-N2-T2-E2-H2, indicating a genomic backbone of the DS-1 genotype constellation. The genomes of these G8P[8] strains shared >99.6% nt identity with each other (Table 2; Technical Appendix). All 11 genome segments of strain To14-0 (the representative G8P[8] strain in this study) exhibited the highest nucleotide identity to human G8P[8] strains isolated in Southeast Asia in 2014 (represented by strain RVN1149 from Vietnam [>99.4% nt identity] and NP-130 from Thailand [>99.5% nt identity]) (6,7) (Table 2). This finding suggests that the strains share a common G8P[8] origin. 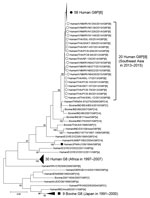 Figure 2. Phylogenetic analysis of the viral protein 7 gene of G8 rotavirus strains used in a study of the clinical and molecular features of a G8P[8] rotavirus outbreak strain, Hokkaido Prefecture, Japan,...

The VP7 genes of the human G8P[8] strains isolated in this study and in Southeast Asia appear to have a close relationship with bovine strains from Asia but not from Japan, and the VP7 gene of human G8 or bovine G8 strains previously isolated in Japan are distantly related to them. Therefore, the VP7 genes in the G8P[8] strains from this study may have originated from a bovine strain from Asia. As with the VP7 genes, the VP1 and NSP4 genes are also assumed to have been derived from artiodactyl strains.

For the reasons we have stated, the G8P[8] strains isolated in this study were speculated to be formed outside of Japan by multiple reassortment events between the DS-1–like P[8] strains and bovine strains in Asia. The resulting strain was probably recently introduced into Japan.

The predominance of novel DS-1–like G8P[8] strains noted in this study indicates that these strains are sufficiently adapted to humans to sustain human-to-human transmission in an industrialized country. This finding suggests that these G8P[8] rotavirus strains could spread to other regions in the near future. Continuing surveillance is required to monitor the circulating wild-type strains, and rotavirus genotype constellations and clinical information must be analyzed to understand rotavirus virulence in humans.

Dr. Kondo is a pediatrician in Department of Pediatrics, Sapporo Medical University School of Medicine. His primary research interests are molecular biology and the epidemiology of rotaviruses.

This study was supported in part by a Japan Society for the Promotion of Science Grant-in-Aid for Scientific Research C (grant no. 15K09693); a commissioned project for Research on Emerging and Re-emerging Infectious Diseases from the Japanese Ministry of Health, Labor and Welfare (to K.K.); and Japan Agency for Medical Research and Development (to K.K.).