Seoul virus (SEOV), a hantavirus and the etiologic agent of a mild-to-moderate hemorrhagic fever with a renal syndrome, is associated worldwide with brown rats (Rattus norvegicus), a commensal rodent that is found in all human-inhabited locations (1). In Russia, South Korea, and China, a wide range (few tens to few thousands) of human infections with SEOV are reported annually (with potential serologic cross-reactivity with co-circulating Hantaan virus); otherwise, only a few countries have reported rare sporadic cases, mostly serologically confirmed (1–4). Four human cases were recently described in the United Kingdom and France (4–6). We report 3 patients in France, whose SEOV infections were confirmed by using molecular techniques, and identified through systematic surveillance within a 24-month period.

Case-patient 1 was a 27-year-old man from Dijon, France, who was hospitalized 3 days after onset of symptoms during February 2014. His clinical and biologic characteristics were fever, mild renal syndrome, thrombocytopenia, and increased levels of liver enzymes (Table 1). Hantavirus IgM and IgG were detected in an admission serum sample by using commercial ELISAs at a private clinical laboratory. Presence of IgM was confirmed at the French National Reference Center for Hantavirus (NRC; Lyon, France) by using reference ELISA and indirect fluorescent antibody assays (5) (Table 2). 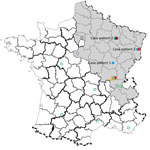 Virus was detected by using molecular techniques as described (5). A partial SEOV small RNA sequence (GenBank accession no. KX064269) was isolated from an admission sample by conducting a BLAST (https://blast.ncbi.nlm.nih.gov/Blast.cgi) search. Exposure to the virus was suspected to have occurred during building restoration work (Figure 1).

Case-patient 2 was a 22-year-old man from Erize-Saint-Dizier, France (Figure 1), who was hospitalized 4 days after onset of symptoms during September 2014. His clinical and biologic characteristics were fever, thrombocytopenia, and liver function disorders (Table 1). Hantavirus IgM and IgG were detected in an admission serum sample by using commercial ELISAs at a public hospital clinical laboratory. Results were confirmed at the NRC (Table 2).

Virus was detected by using molecular techniques, and a partial SEOV small RNA sequence was obtained from a serum sample, as shown by a BLAST search.

The pet rat (Rattus norvegicus) of case-patient 2, bought ≈1 month before onset of symptoms, was considered the presumptive source of the virus. The animal was euthanized after consent of the patient was obtained. An identical partial SEOV small RNA sequence was obtained from the liver of the animal.

Case-patient 3 was a 32-year-old man from Turckheim, France (Figure 1), who was hospitalized 4 days after onset of symptoms during January 2016. His clinical characteristics were severe fever, thrombocytopenia, liver disorders, myopericarditis, and renal syndrome that require hemodialysis (Table 1). Hantavirus IgM and IgG were detected 6 days after symptom onset by using commercial assays in a private clinical laboratory. Results were confirmed at the NRC (Table 2).

Virus was detected by using molecular techniques reported by Klempa et al. (7). A partial SEOV large RNA sequence (GenBank accession no. KX064268) was obtained from an admission serum sample, as demonstrated by a BLAST search.

This case-patient raised brown rats as a food source for his snakes and routinely captured and killed wild brown rats that invaded his hen house. His breeding unit was the likely source of human infection. Organs from 10 rats sampled at this unit were positive for SEOV by nested reverse transcription PCR (7). A partial large RNA sequence obtained from a rat was identical to that obtained from the case-patient. Only 1 wild rat caught near the hen house was sampled; results were negative for SEOV.

Figure 2. Phylogenetic tree based on the complete small RNA nucleotide coding sequences of Seoul virus (SEOV) strains isolated from 3 patients and rodents in contact with the patients infected with SEOV, France...

We obtained complete small RNA coding domain sequences (GenBank accession nos. KX064270–KX064275) from specimens from case-patients 1 and 2 (samples were not available for case-patient 1); specimens from the pet brown rat and raised brown rats suspected to be sources of infection for case-patients 2 and 3; and specimens from 2 wild brown rats suspected to sources of infection for a serologically confirmed human infection with SEOV detected in 2014 (6). Using MEGA version 5.1 (8) and a generalized time-reversible model with a gamma distribution and 5 rate categories (according to the best fit substitution model proposed), we performed phylogenetic analysis of the small RNA coding sequence. This analysis confirmed that all virus strains detected were SEOV (Figure 2).

Four hantaviruses (Puumala [PUUV], SEOV, Tula, and Nova viruses), have been detected in France; the first 3 viruses were associated with humans, and most human infections were with PUUV (9). Human SEOV infection in Europe was initially reported in 2013 (5); however, human SEOV infections were previously suspected by serologic analysis in France (6 cases were reported during 1977–1996). SEOV was also detected in rodents from several areas in France (Figure 1) (10–13).

Some infections with SEOV are probably missed in France. Commercials kits are used for hantavirus serologic diagnosis by 15 public hospital or private clinical laboratories in France. Eleven of these hospitals used a POC Puumala IgM rapid test (Reagena, Toivala, Finland). Four other hospitals used IgM and IgG ELISA kits with mixtures of recombinant antigens, including those from SEOV or Hantaan virus strains.

Most (83.4%) diagnostic tests in 2014 were requested for patients in the area of France to which PUUV is endemic. Consequently, some SEOV infections might have been be missed because hantavirus infection is rarely suspected outside this area. Samples with positive results for SEOV are sent to NRC for diagnostic confirmation and surveillance purposes. The 3 case-patients we report initially showed positive results by ELISA at local laboratories but then showed negative results by a ReaScan Puumala IgM test (Reagena) at NRC (Table 2). Therefore, SEOV infections were probably not detected initially by the 11 local laboratories who used the PUUV IgM Rapid Test, which led to underestimation of SEOV infections in humans in France.

This negative result could have also occurred in other countries in Europe that used the same test. Consequently, use of a pan hantavirus serologic assay is preferred. Furthermore, PUUV was detected by molecular techniques for most PUUV-infected patients during the acute phase of the disease (14). Thus, although there are no similar data for SEOV, to avoid misdiagnosis, we suggest using molecular diagnostic tests to more specifically detect hantavirus infections.

Furthermore, epidemiologic investigations showed that several animal traders in Europe sold pet rats or food rats to case-patients 2 and 3. These investigations also identified weak traceability of rat batches, absence of health-monitoring data for rats, and no information for the 3 case-patients on zoonotic risks for infection. Awareness of rat owners, traceability, and health monitoring of these animals, as performed for laboratory rats (15), should be improved.

Dr. Reynes is a veterinarian and a medical virologist at the Institut Pasteur, Lyon, France. His research interests focus on zoonotic infectious diseases.