We report a case of Zika virus infection that was imported to Japan by a traveler returning from Vietnam. We detected Zika virus RNA in the patient’s saliva, urine, and whole blood. In the Zika virus strain isolated from the urine, we found clearly smaller plaques than in previous strains.

A 40-year-old man came to the National Center for Global Health and Medicine in Tokyo, Japan, in the middle of November 2016 with fever and a rash. In early November 2016, he had traveled to Ho Chi Minh City, Vietnam, where he stayed for 10 days. During his return to Japan, he developed fever and a diffuse rash on his face, trunk, arms, and legs. He went to the hospital on the day after his return and reported having been bitten by mosquitoes in Ho Chi Minh City. Upon arrival at the hospital, he had no fever (temperature 36.8°C); physical examination revealed conjunctivitis and a maculopapular rash on his face, trunk, and extremities. Results of laboratory tests showed leukopenia (2,250 cells/μL; reference 3,500–8,500 cells/μL) and a platelet count within reference range. We performed a rapid dengue test (Dengue Duo NS-1 Ag + Ab combo; SD Bioline, Standard Diagnostics Inc., Gyeonggi-do, South Korea); results were negative for nonstructural protein 1, IgM, and IgG. We performed real-time reverse transcription PCR (RT-PCR) amplification using Zika virus primers and probes with urine, saliva, whole blood, serum (obtained 4 days after symptom onset), and semen samples (obtained 6 days after symptom onset). We detected Zika virus RNA in the urine (cycle threshold [Ct] 32.0), saliva (Ct 39.1), and whole blood (Ct 38.1) samples. However, we did not detect Zika virus RNA in the serum or semen samples. We diagnosed Zika virus infection in this patient; his symptoms resolved without treatment within 7 days after he initially sought care. 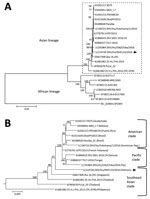 Figure. Phylogenetic analysis of the Zika virus sequence derived from a patient returning to Japan from Vietnam in November 2016. The phylogenetic tree was based on a nearly complete genome and constructed...

Our phylogenetic analysis suggested that the Asian lineage can be divided into 3 clades (Southeast Asian, Pacific, and American), and the strain we isolated belonged to the Southeast Asian clade. A previous study indicated that a strain isolated in Singapore in 2016 (ZKA-16-291; GenBank accession no. KX827309) also belonged to the Southeast Asian branch, and it was distinct from the isolates obtained in the Americas (7). Therefore, it is possible that the isolate from the current case was the strain that is already circulating in Vietnam and was not imported from South America. Our isolate formed smaller plaques in Vero cells than those observed with the other Asian lineage ZIKV/Hu/S36/Chiba/2016 strain (Pacific clade). We also confirmed that the plaque sizes of the PRVABC59 (American clade) and MR766-NIID (African lineage) strains resemble that of ZIKV/Hu/Chiba/S36/2016 (data not shown), suggesting that the Southeast Asian clade Zika virus strains might have a lower cytotoxicity and replicative ability than the American clade and African lineage.

In conclusion, the replicative ability of Zika virus might differ by region and thus influences endemic potential. Further studies are necessary to validate these findings.

Dr. Hashimoto is a medical doctor at the National Center for Global Health and Medicine, Disease Control and Prevention Center, in Tokyo, Japan. His main research interest is tropical infectious diseases.

This work was supported by a grant from the Japan National Center for Global Health and Medicine (27-6001).