We extracted information from field investigation reports and the notifiable infectious surveillance system to describe the demographic, clinical, and epidemiologic characteristics of HPAI A(H7N9) case-patients. We used descriptive statistics to compare HPAI A(H7N9) cases with all LPAI A(H7N9) cases reported throughout mainland China and with LPAI A(H7N9) cases identified in the same provinces as HPAI A(H7N9) cases during the fifth epidemic reported as of March 31, 2017. Collection and analyses of data from human infections with A(H7N9) virus were determined to be part of an ongoing public health investigation of emerging outbreaks and thus were exempt from institutional review board assessment in China (3). 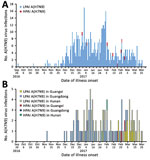 Eight cases of HPAI A(H7N9) virus infection were identified from 3 provinces in southern China (Figure 1). The first 2 case-patients had illness onset on December 30, 2016, and January 5, 2017, in Guangdong Province. Additional case-patients were identified in Hunan and Guangxi Provinces with illness onset during February 2017 (Figure 2). Of the 8 total case-patients, the median age was 57 years (range 28–71 years), and 4 (50%) were male. Most (75%) case-patients lived in rural areas, as defined previously (4), and all were exposed to poultry within 10 days of illness onset. Five case-patients had exposure to backyard poultry, including 4 exposed to sick or dead poultry; 2 had household exposure to poultry purchased from LPMs, including 1 with poultry that were sick and died in the home; and 1 was a poultry worker who sold and slaughtered poultry at an LPM. One cluster of HPAI A(H7N9) cases was identified in 2 adult sisters; 1 sister had household exposure to sick and dead poultry, and the other sister had exposures to sick and dead poultry at her sister’s house, to poultry brought inside her home from her sister’s house, and to her ill sister while that sister was hospitalized.

Dr. Zhou is the Deputy Chief of the Branch for Emerging Infectious Diseases, Public Health Emergency Center, China CDC. Her research interests are prevention and control of emerging infectious diseases as well as pandemic influenza preparedness and response.

We thank staff members in the local and provincial China CDC sites for providing assistance with data collection. We also thank Yuelong Shu and colleagues at CNIC for their contributions to laboratory testing and analyses to confirm HPAI A(H7N9) virus infections.

This work was supported by the Ministry of Science and Technology of China, Emergency Technology Research Issue on Prevention and Control for Human Infection with A(H7N9) Avian Influenza Virus (grant no. KJYJ-2013-01-02), the China–US Collaborative Program on Emerging and Re-emerging Infectious Disease, and National Mega-Projects for Infectious Diseases (grant no. 2014ZX10004002-002-004).

Page created: July 18, 2017
Page updated: July 18, 2017
Page reviewed: July 18, 2017
The conclusions, findings, and opinions expressed by authors contributing to this journal do not necessarily reflect the official position of the U.S. Department of Health and Human Services, the Public Health Service, the Centers for Disease Control and Prevention, or the authors' affiliated institutions. Use of trade names is for identification only and does not imply endorsement by any of the groups named above.