Hand, foot and mouth disease (HFMD) is a common childhood infectious disease caused by enteroviruses (1). In China, HFMD cases must be reported to the Notifiable Infectious Diseases Reporting Information System. Apart from clinical and demographic information, case notifications also include etiologic results, if available, classified into 3 categories: enterovirus A71 (EV-A71), coxsackievirus (CV) A16, and other enteroviruses. However, not all cases have etiologic results, the Notifiable Infectious Diseases Reporting Information System (NIDRIS) does not indicate cases that tested negative for enteroviruses, and testing methods vary among hospitals (2). To capture more information on the etiologic spectrum of HFMD in China, a laboratory surveillance network has been established in provincial-level centers for disease control and prevention (CDCs). EV-A71 and CV-A16 were previously believed to be the main causative viruses for HFMD in Asia, but several studies have suggested that other enteroviruses appear to be increasing since 2008 (3–9). Nevertheless, these past studies in China could not provide an overview at the national level because of limitations in geographic locations or study settings; furthermore, none of them systematically examined proportions of specific enteroviruses testing positive among tested HFMD cases. We analyzed data from this laboratory network to examine causative pathogens of HFMD cases and epidemiologic differences associated with various pathogens.

Since June 2009, clinical specimens must be collected from all severe HFMD cases, and the first 5 reported mild cases (case classification criteria in the Technical Appendix) in each county of China every month and are tested for enteroviruses at local CDCs using PCR (Technical Appendix) (10). Test results are characterized as negative for enterovirus or positive for EV-A71, CV-A16, or other enteroviruses. For specimens testing positive for other enteroviruses, further serotyping is not conducted as a routine practice, but some local CDCs with more laboratory capacity may select a subset of these specimens to test on the serotype at their own discretion, especially when the proportion of other enteroviruses detected was relatively high.

Weekly proportions of positive enteroviruses (1 – enterovirus-negative specimens divided by all specimens collected for testing) were generally lower in mild cases (median 62.4%, range 42.0%–74.0%) than in severe cases (median 73.1%, range 27.3%–100%) and showed seasonal variations: peaks in April–May and low levels in December–January (Figure 1). The highest weekly proportion of EV-A71 detections among mild cases was 37.7% in 2010; a decreasing trend was observed thereafter. EV-A71 vaccine probably had little effect on the change in EV-A71 detections because it was not available until March 2016 and was not included in the routine vaccination program. In contrast, weekly proportions of detection of other enteroviruses generally increased with time, reaching a maximum of 48.4% in 2015. The proportion of cases positive for CV-A16 was relatively stable at ≈20% across the years, following a similar temporal trend to that of EV-A71. However, detections of different serotypes of enteroviruses generally demonstrated a similar temporal pattern among severe cases as among mild cases, except that the proportion of CV-A16 was relatively low, fluctuating at ≈5% across the period (Figure 1). Proportions of detection generally declined with age for other enteroviruses, whereas EV-A71 and CV-A16 showed an increasing trend with age, particularly in mild cases (Technical Appendix Figure 2). 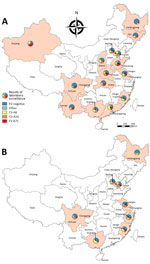 Figure 2. Estimated yearly detection proportions of CV-A6, EV-A71, CV-A16, and other enteroviruses among mild hand, foot and mouth disease cases by province in China: A) 2013; B) 2015. CV, coxsackievirus; EV, enterovirus....

We found that detection proportions of other enteroviruses were generally negatively associated with that of EV-A71 in mild and severe cases (Pearson correlation coefficient −0.73 for mild cases and −0.70 for severe cases) and CV-A16 in mild cases (Pearson correlation coefficient −0.52) (Figure 1). This result might indicate competitive interactions between other enteroviruses and EV-A71 or CV-A16, which should be considered when evaluating the effect of introducing a new enterovirus vaccine, especially when the proportion of other enteroviruses is increasing. The epidemiologic modeling study suggested that cross-protection between EV-A71 and CV-A16 exists for nearly 7 weeks, on average, in the context of natural infections (12). However, vaccine trials reported that monovalent EV-A71 vaccine failed to protect against CV-A16–associated HFMD (13). Similarly, whether cross protection exists between EV-A71 and other enteroviruses, such as CV-A6 and CV-A10, remains poorly understood to date, although limited studies have been more indicative of a lack of cross protection between EV-A71 and coxsackieviruses including CV-A6 (14,15).

Data from national laboratory network surveillance of HFMD in China show that detection of enteroviruses other than EV-71 and CV-A16 has been increasing in both mild and severe cases and that CV-A6 has been emerging as another predominant serotype recently, but not in every province. Serotyping of individual enteroviruses apart from currently tested EV-71 and CV-A16 is suggested for routine virologic surveillance. Further studies may be needed to investigate potential cross immunity between EV-A71 and other enteroviruses such as CV-A6, CV-A10, and others.

Dr. Li is a doctoral candidate at the School of Public Health, the University of Hong Kong. His primary research interests include epidemiology and transmission dynamics of zoonotic and vectorborne diseases, and hand, foot and mouth disease.

We thank county-, prefecture-, and province-level CDCs in the 23 provinces for their kind support and assistance in collecting data.

This study was funded by the National Science Fund for Distinguished Young Scholars (grant no. 81525023), the US National Institutes of Health (Comprehensive International Program for Research on AIDS grant no. U19 AI51915), Chinese Center for Disease Control and Prevention’s Key Laboratory of Surveillance and Early Warning on Infectious Disease, the Harvard Center for Communicable Disease Dynamics from the National Institute of General Medical Sciences (grant no. U54 GM088558), the Research Grants Council of the Hong Kong Special Administrative Region, China (project no. T11-705/14N), the National Natural Science Foundation of China (grant no. 81473031), the Natural Science Foundation of Shanghai (grant no. 14ZR1444500), the Li Ka Shing Oxford Global Health Programme (grant no. B9RST00-B900.57), and the TOTAL Foundation (grant no. 2015-099).